One of our readers posed this question to us.

In most mammals our birthing cycles are long. So, I was thinking.. optimally as a specie to survive, wouldn’t it make more sense to have X females per male?

Since most of the historical evolution has been based on survival, why has the sex ratio in all mammals remained close? Why don’t we see mammals where there are 100 females to 1 male?

The underlying reason for this conundrum was first outlined by Ronald Fisher and is still known as Fisher’s Principle. It doesn’t just hold true for mammals, but for most sexually reproducing organisms.

To explain why, first I have to clear up a bit of a misconception. You say:

So, I was thinking.. optimally as a specie to survive, wouldn’t it make more sense to have X females per male?

So, why have equal numbers of males and females? Well, basically, imagine a situation where 100 females were born for every male. Now imagine some individual has a mutation that causes them to produce more male offspring, instead of just having 1 in 100. All their male offspring will do very well. They’ll go on to impregnate dozens of females and produce lots of offspring. The gene for having more males will spread. The gene for having more females will not keep up, because individuals with that gene will only produce females, and those will only produce a few offspring. Eventually, though, there will be lots of males. At that point, it will be the males who have trouble finding mates, while all females are guaranteed a chance to get lucky. And so production to produce more females will be favored. This all evens out to favor a nearly 50-50 sex ratio at birth. Basically, selection favors having offspring that have the most opportunity to reproduce, and this means having offspring of the less common sex. This is known as negative density dependent selection.

So does does monogamy vs polygamy affect the ratio at all? 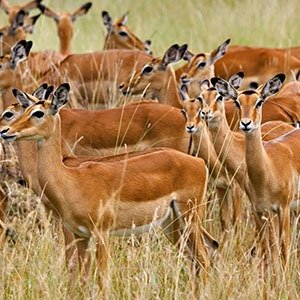 Oddly, no. Consider deer, for example, which are highly polygamous. Female offspring have a very high chance of having a few offspring (because they nearly all breed, but also can only have a few babies over their lifespan). Male offspring have a low chance of having a ton of offspring (because they will either have none, or be the male in charge of a harem and father most of the babies in the herd). It works out that the overall fitness (number of expected offspring) is the same for both male and female, it’s just that the manner of getting to that point is different.