Here are 30 Interesting Facts About Wine. 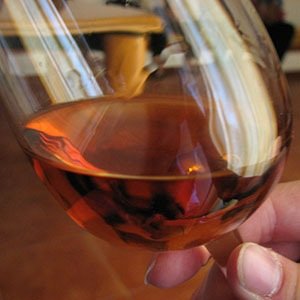 1. In an experiment conducted in 2001 at the University of Bordeaux, every one of the 54 undergraduates in wine making and tasting thought they were tasting a red wine while it was actually a dyed white wine. Furthermore, when comparing identical wine of different prices, experts raved about the expensive wine while panning the cheap wine – Source

2. In 1976, there was a wine tasting in Paris that blindly compared Californian wines to French wines. California won and the lone reporter covering the event was blacklisted for reporting it. – Source

3. A 2005 study found that the scores of “wine experts” are essentially meaningless, revealing that a typical judge’s scoring of a wine varied by plus/minus four points over three blind tastings poured from the same bottle. – Source

4. There is an organization that utilizes wine tastings to dig wells in Africa. They call themselves Wine to Water. – Source

5. The world’s oldest person attributed her ripe old age (122) to a diet of olive oil, port wine and 1kg of chocolate per week. – Source 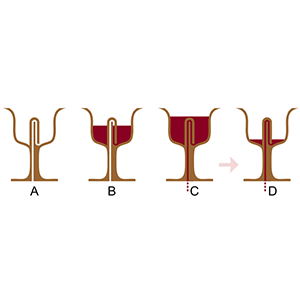 6. The ancient Greeks had a wine glass to ensure the drinker’s moderation. If wine was poured above a certain level, the cup spilled its entire contents out of the bottom. – Source

7. During the prohibition, grape juice mix was sold with the warning “After dissolving the brick in a gallon of water, do not place the liquid in a jug away in the cupboard for twenty days, because then it would turn into wine.” – Source

9. A man broke into Buckingham Palace spending half hour eating cheddar cheese and wandering around. He tripped several alarms, but they were faulty. He viewed the royal portraits and rested on the throne for a while. He drank half a bottle of wine before becoming tired and leaving. – Source 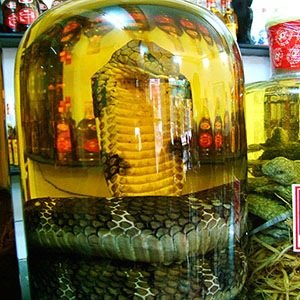 11. In Vietnam, it’s possible to order a cobra blood wine from restaurant menus. The waiter will take a live cobra, kill it on the spot, drain the blood into a shot glass of rice wine, and top it off with the cobra’s still beating heart for you to gulp down. – Source

12. The Swedish former physical education teacher, Richard Juhlin has the best nose for wine (champagne specifically) and in famous blind tasting of 2003, arranged by Spectacle du Monde, he correctly identified 43 of 50 wines. The one who came in second correctly identified only four. – Source

15. Staying awake for 17 hours leads to decrease in performance, which equals two glasses of wine. – Source 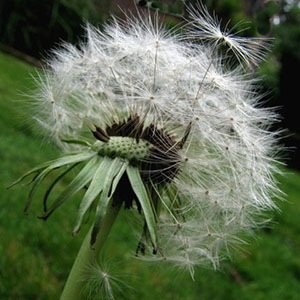 16. The entire dandelion plant is edible. 100 g of its leaves provides nearly 750% your recommended daily intake of Vitamin K, its flowers can be used to make wine, its root can be used to make a coffee-tasting drink, and it is also used in several soft drinks – Source

17. In an experiment, it was found that wine drinkers paid more for wines with hard to pronounce names. It is particularly interesting to note that participants who knew more about wine were more likely to report that difficult-to-pronounce wines were worth more money. – Source

18. Ancient Egyptian kings avoided wine because of its resemblance to blood. They believed that it was the blood of those who battled the gods and lost and that it was the reason why drinking wine temporarily drove people out of their senses and made them a little crazy. – Source

19. You can open a bottle of wine with your shoe. Here is the video showing how it’s done.

20. Tigers in China are bred in captivity. Those in captivity far outnumber the amount of wild tigers, as tigresses are made to produce cubs at 3 times more often than their natural rate by having cubs. Cubs are then weaned off to pigs or dogs. All this is done to make Tiger Bone wine – Source 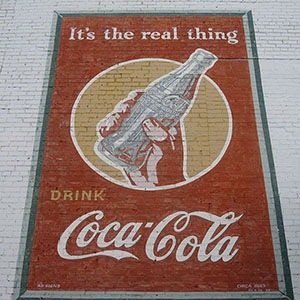 21. Coke was originally marketed as a cure to many ailments including low sexual libido. The creator of Coke, John Pemberton was forced to take the alcohol out of his original coke wine formula due to prohibition laws, but he first touted that version as “the most wonderful invigorator of sexual organs.” – Source

22. There is an alcoholic drink called seagull wine. That is made purely by stuffing a whole seagull into a bottle of water and leaving it in the sun to ferment. – Source

23. In the 1860’s, a French chemist made a fortune selling red wine mixed with cocaine. His “Vin Mariani” was endorsed by Queen Victoria, President McKinley, and Pope Leo XIII. – Source

24. Someone once made wine out of tent caterpillars. In a blind test, taste testers rated the wine 7/10, saying it tasted similar to grape wine. – Source

25. All Royal Navy vessels wishing to enter The Port of London are still required to give a gift of a barrel of rum or wine to Constable of the Tower of London upon entry. – Source 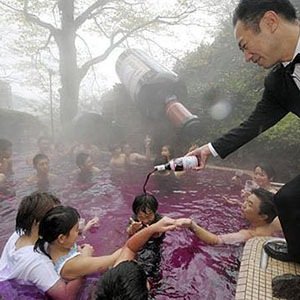 26. In Japan there is a spa where you can swim in tea, coffee, and wine. – Source

27. The oldest preserved bottle of wine is nearly 1700 years old and it is on display in a German museum. – Source

28. That “legs” on wine doesn’t actually determine quality, but only determines that the wine has a high content of alcohol. If you cover your glass the legs will disappear. – Source

30. A 1997 experiment found that when French music was played in a store, more customers bought French wine. When the music switched to German, there were more German wine sales. – Source