1. Every winter at a research station in the South Pole, 50 people are left totally isolated for 8 months. An annual tradition for the personnel is the back to back watching of the 3 “The Thing” films after the last plane has left for the winter. – Source

2. During the “Red Terror” of 1918, Communist secret police in Orel “poured water on naked prisoners bound in the winter streets until they became living ice statues.” In Ukraine, they “rolled people around in barrels studded internally with nails.” Upwards of 1 million people died. – Source

3. Germans and Russians in World War I had a temporary winter ceasefire to hunt hundreds of wolves that viciously attacked the soldiers. – Source

5. It’s possible to walk from the U.S. to Russia in the winter. – Source

6. The only recorded instance of a cavalry capturing an enemy’s ships occurred in the unusually cold winter of 1795 when most of the waterways in Northern Europe froze over and the French cavalry was able to charge out onto a frozen port to capture the Dutch fleet stranded there. – Source

7. Russia has to bomb their rivers every winter to prevent dangerous flooding caused by ice dams. – Source

8. The direction of a ceiling fan should spin clockwise in the winter to push air up and to the walls to avoid a draft underneath the fan. – Source

9. By 400 BC Persians had developed a type of building that produces ice in winter and stores it throughout the summer in a hot desert climate. – Source

10. There are winter blend and summer blend gasoline and it is one of the reasons the gas prices go up in spring. – Source

11. Some Arctic caterpillars can’t eat enough during summer to sustain transformation so they winter over frozen solid, protected by their blood’s antifreeze properties. It may take 14yrs before they build enough reserve to transform. These are the oldest caterpillars in the world. – Source

12. There is a frog which lets itself completely freeze into a ‘frogsicle’ every Winter. Its heart stills, blood stops flowing, and eyes go white because its lenses freeze. In the Summer it thaws and hops away, good as new. – Source

13. The Mall of America has no central heating system. All the heat is generated by people, lighting, and skylights. They even have to run the air conditioner during the cold winter months just to keep the mall comfortable. – Source

14. Scientists believe that a large-scale nuclear war would result in what is commonly known as a “nuclear twilight”, a global winter-like climatic event that would potentially last decades or even centuries following the use of nuclear weaponry. – Source

15. A city in Sweden uses light therapy in bus stops to combat depression during winter when 19 hours of the day are darkness. – Source 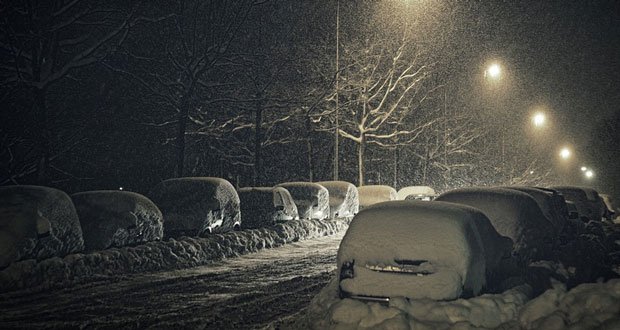 16. Winter storm names are not acknowledged by the National Weather Service. – Source

17. Many European zoologists believed that birds hibernated under the sea or flew to the moon in winter until 1822, when a stork was found in Germany with an arrow from Central Africa embedded in its neck, providing the first clear evidence of migration. – Source

19. A Bumblebee will perform warm-up exercises in the winter before taking flight. – Source

20. The reason traditional Asian roofs curve out at the corners is to allow more light to enter the windows in winter and give more shade in summer. – Source

21. Rumble strips cause an increase in roadkill. During winter, the salt that gets put on the road accumulates in the spaces between the rumble strips. Moose, elk, and deer view this as a convenient salt lick and get hit by oncoming traffic. – Source

22. There is a town in Norway called Hell, and it freezes over almost every winter. – Source

23. Despite an annual rainfall of just three inches, Yuma, AZ produces 90% of the United States’ lettuce during the winter. – Source

24. In the UK the government funds a service which you can notify about a person sleeping rough during winter, and they will find that person and arrange a bed for the night. – Source

25. 70% of Mongolian nomads have solar power since 2013. The sun shines 250 days on average each year in Mongolia. It shines, even during the frigid winter days, on the hundreds of thousands of nomads who still roam the steppes, herding animals and living in dome-like tents calling gers. – Source