Here is the final segment in the series on a tale of rise and fall of ideology. 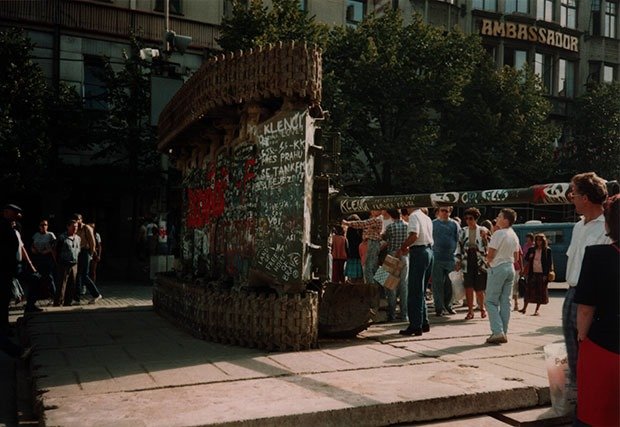 A Soviet tank, left in Prague from the intervention in 1968, is turned on its side and left in the street for bystenders to chalk messages on. Czechoslovakia’s “Velvet Revolution” was followed in 1993 by the Velvet Divorce, creating the Czech Republic and the Slovak Republic. They still get on. 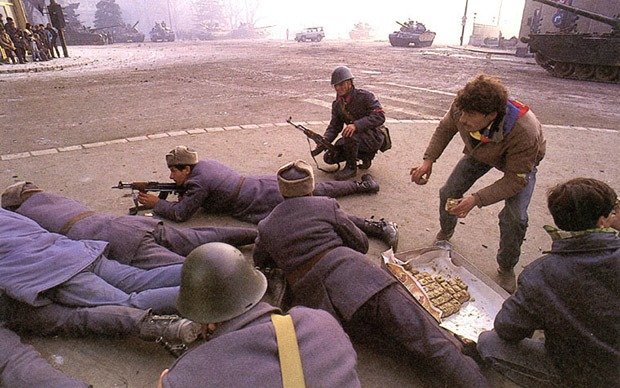 The Romanian Army battles the security forces of toppled dictator Nicolae Ceaușescu on the streets of Bucharest, as a civilian serves them cake. The brief battle for control of Bucharest lead to over 1000 deaths, but by the New Year, the Socialist Republic of Romania was no more. Two of those deaths were Ceaușescu and his wife, Elena, who were caught by the military and executed on Christmas Day after a one-hour show trial. 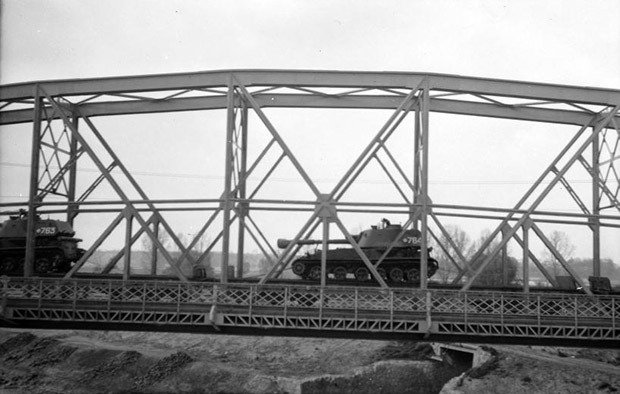 Soviet self-propelled guns cross the Sio Bridge as they leave Hungary for good. At its height, half a million Soviet troops were stationed with the Southern Group of Forces in Hungary, and had been since the Revolution there in 1956. Although both sides were glad to be parting, joy quickly turned to bitterness after the Soviets presented the Hungarians with a $800 million bill for their presence. The Hungarians told them to ram it. 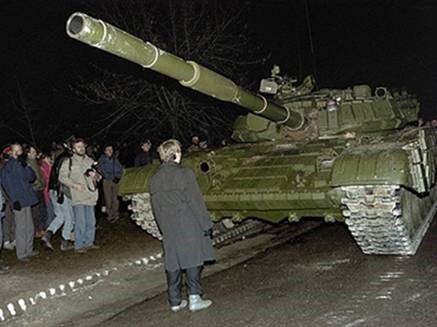 The USSR makes one final attempt to stop its ongoing collapse – Soviet armor rolls into Lithuania in order to prevent “anti-constitutional” reestablishment of the Lithuanian state extinguished by Stalin in 1940. The invasion focuses anti-Soviet feeling and alienates public opinion in Lithuania and Russia. The Soviets withdraw, and the re-established Lithuanian state is recognized by the world. 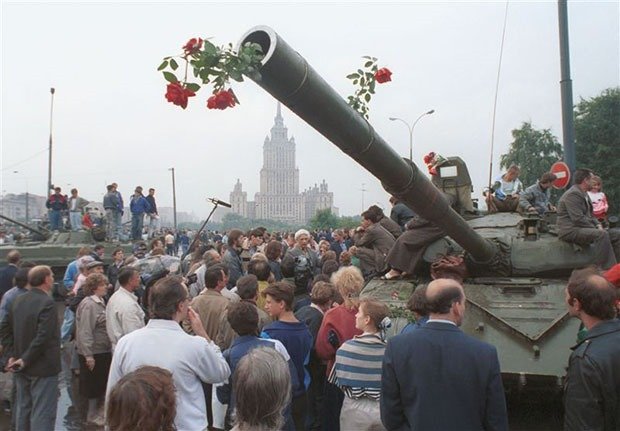 Protesters mill around a tank with a bouquet of flowers stuck in the gun in the aftermath of a failed coup by hardliners in the military and KGB. The coup was stopped by protests, and killed the attempt to preserve a limited “Union of Sovereign States”. Boris Yeltsin gave a speech atop a tank that effectively anointed him the first leader of the Russian Federation. The fall of communism brought liberation for some, but it also caused great hardship in Russia and abroad during the lean decade of the 1990s – whilst the West partied, the East struggled to adapt to the realities of capitalism. 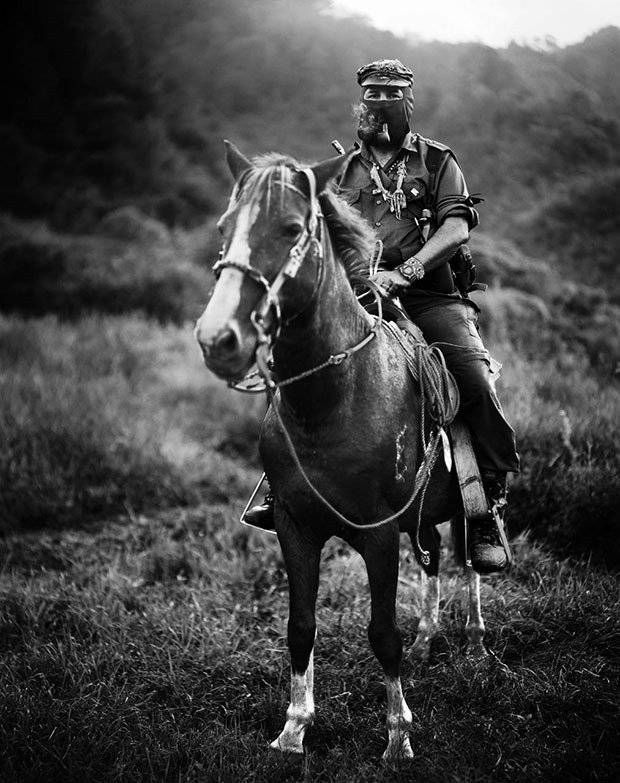 Subcommandante Marcos, spokesman for the Zapatista National Liberation Army, a Mexican guerrilla group, poses for the camera. Since the collapse of the old certainties of the USSR, the new socialism of the 1990s fused older traditions with newer greivances: the Zapatistas drew on older traditions of libertarian socialism to formulate a political strategy against globalization, indigenous disenfranchisement, and environmental destruction. Despite a failed uprising in 1994, the Zapatistas remain active in Chiapas. 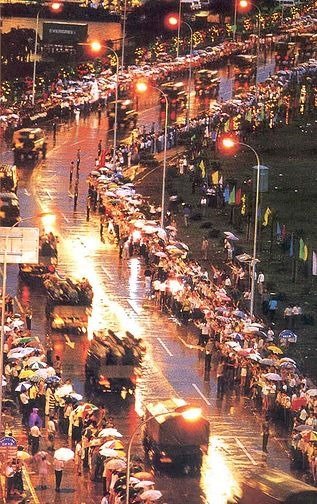 The Hong Kong Garrison of the People’s Liberation Army enters Hong Kong for the first time after the British government completes the handover ceremony. After 150 years as an outpost of Britannia’s dwindling imperium, Hong Kong becomes a “Special Administrative Region” of China. China itself has changed much – after the death of Mao Zedong. China’s “Socialism with Chinese characteristics” inculcates an era of private “state capitalism” and rapid economic growth. 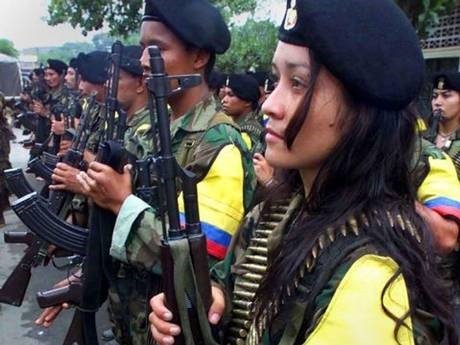 Guerillas of FARC parade in Caguan. FARC began life in 1964 as a peasant rebellion against landowner violence and exploitation; by the present day their activities are financed by kidnapping, extortion, and drug-production. FARC have suffered since Colombia’s establishment of a new constitution in 1991. Despite talks in Havana, however, an end to this fifty-one year war seems remote. 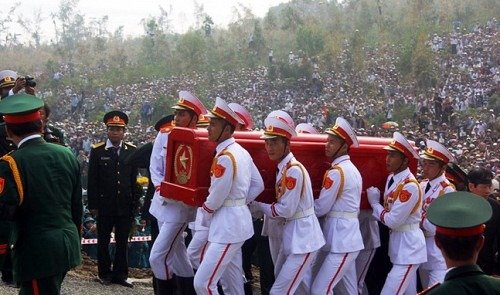 Vietnamese soldiers carry the coffin of General Vo Nguyen Giap, after his death at the age of 102. During his career with the Vietnamese military, Giap led Vietnam to victory over France, America, and China. For his military achievements, he was nicknamed in the West: The Red Napoleon. One by one, the titans of the Cold War die out. The orthodox Vietnamese communist state is one of them – Vietnam goes down the Chinese route. 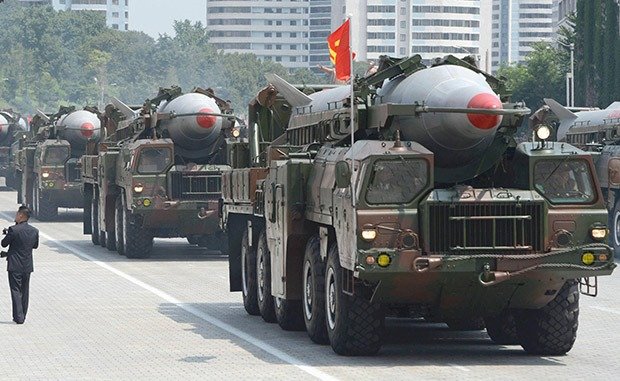 North Korean ballistic missiles parade in Pyongyang. One of the last remnants of an ideological empire that once spanned from Vladivostok to Lima, from Murmansk to Cape Town, North Korea is left isolated and impoverished. The end of the USSR cut off one of North Korea’s vital sources of foreign aid; the country was plunged into a four year famine in 1994 that claimed at least 2.5% of the population. Today, North Koreans are no longer starving, and there are the beginnings of a grey market, but it remains the world’s most totalitarian state.