01. Gandalf and the Balrog 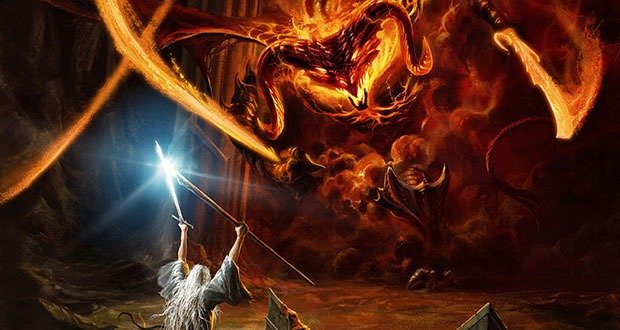 Gandalf and the Balrog are both the same race of beings. They are both Maiar, spirits that came into Arda (the world) in order to assist the Valar (Powers of Arda who shaped and rule the world) in shaping the world. Maiar, like the Valar, do not have a fixed shape or form. In fact, the Maiar “Gandalf” (original name Olorin) spent years in Middle-Earth before taking the form of an elderly wizard (Istari). The Balrog, like Gandalf, did not have a fixed physical form either. It gained its demonic appearance through corruption and torment at the hands of Melkor, who was one of the Valar who turned to evil. 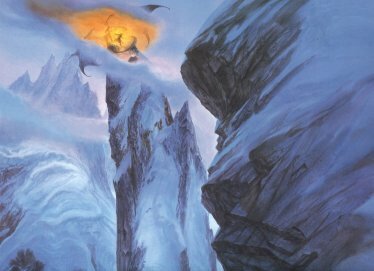 Being of similar age and power, it is not a coincidence that both Gandalf and the Balrog died by slaying each other in the Battle of the Peak atop Zirakzigil. While Gandalf’s physical body was destroyed, the Maiar spirit is immortal, which is why Gandalf’s spirit floated through time and space until he was able to regain physical form. The balrog, however, from being twisted and tormented by evil was no longer able to change its form. As a result, when Gandalf slayed it, it stays permanently dead and its spirit is destroyed. 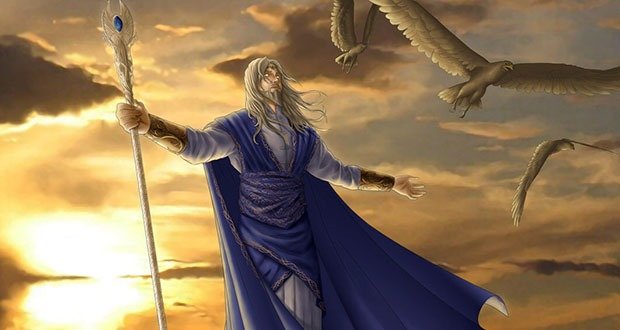 The Ainur(the Holy Ones), which includes Valar and Maiar are immortal beings. In fact some of them are essences which exist in a place outside of space and time, meaning that their existence can;t actually be quantified. Valar may take physical form, which can be destroyed. However, their spiritual essence will endure and eventually they will be able to take physical form again. At the time of the creation of Arda (the world which includes Middle-Earth), the Ainur were given the choice to stay in the space of timelessness or enter the physical dimension. Those who decided to enter Arda, will forever have their fates tied to the physical world until the End. 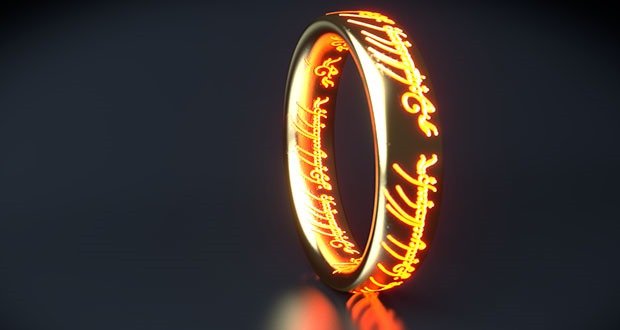 The destruction of the One Ring and the subsequent destruction of Sauron and Barad-dûr does not signal the end of all evil in Middle-Earth. While Sauron was defeated, his evil, and the evil of Melkor will return to Arda in the Dagor Dagorath (The Battle of Battles) which will occur at the End of time. At this point, Eru Ilúvatar (the High One, i.e. Supreme Being) will reveal his full vision to all Valar.

Basically, the War of the Ring is truly significant only within the context of the 3rd Age and start of the Age of Men (4th Age). The true battle of good and evil will occur in Dagor Dagorath (Battle of All Battles). 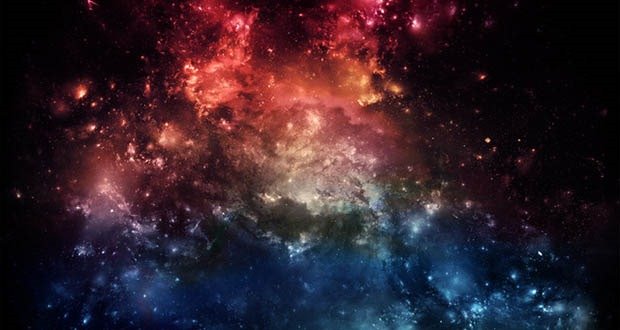 Eru is transcendent, and completely outside of and beyond the world. The first things that Eru Ilúvatar created were the Ainur (from his thoughts). The higher Ainur, the Valar, were 15 in total (8 lords, 7 ladies). Manwë and Varda were King and Queen of the Valar; Melkor, one of the most notable Valar, eventually became pure evil and would wreak havoc with his servant, Sauron.

The Valar, despite being of Eru’s thoughts have their own agency and free will. Additionally, each Valar is only able to comprehend one facet of Eru’s divine plan. The lesser, but still powerful Ainur were known as Maiar (notable Maiar include: Gandalf and the other Istari wizards, Balrogs, and Sauron). 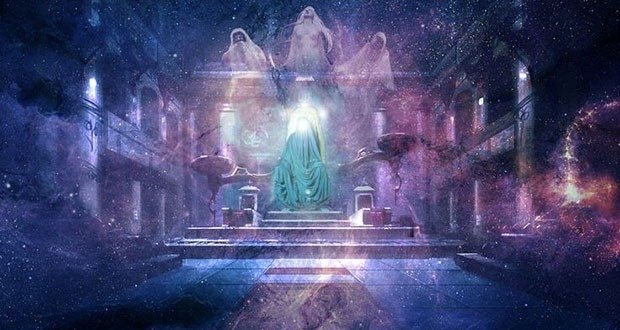 Upon creating the Ainur, Eru then engaged in great concert with the Ainur; this was called the Ainulindalë (“music of the Ainur”). Through this great music, Eru and the Ainur created Eä (“World and All That Is”). He then gave the Ainur the option to go into Eä and fashion it as they saw fit. The Valar were the first of the Ainur to enter Eä and they controlled the shaping of the Arda (“the world”). 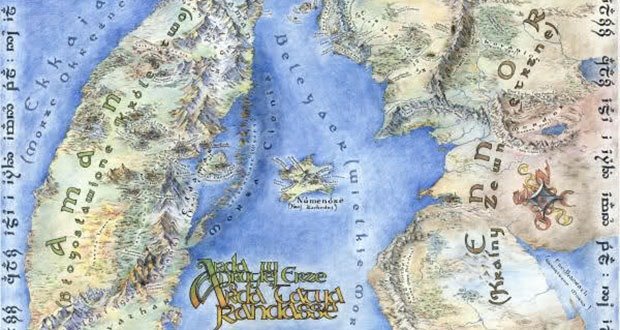 Arda consists of land masses, most notably the continents of Middle-Earth and Aman, oceans and seas, and an atmosphere. Originally, Arda was flat, rather than spherical (though it still had mountains and valleys), and the Valar built it to a symmetric plan. (The portion of Arda known as Middle-Earth was originally shadowed in darkness and controlled by Melkor, the most powerful Valar and the embodiment of evil).

Initially, the Valar spent the majority of their time on the continent of Aman in Valinor. Before the end of the second age, Aman was physically accessible by sea. However, the Númenórean men seeking immortality, attempted to enter Aman despite this being forbidden under the Ban of Aman. When Númenóreans arrived on the coast of Aman, Eru intervened and separated Aman from the rest of Arda.

It was also at this time that Eru made the rest of Arda, which includes Middle-Earth, into a sphere so that men who tried to sell east would always end up back where they started. 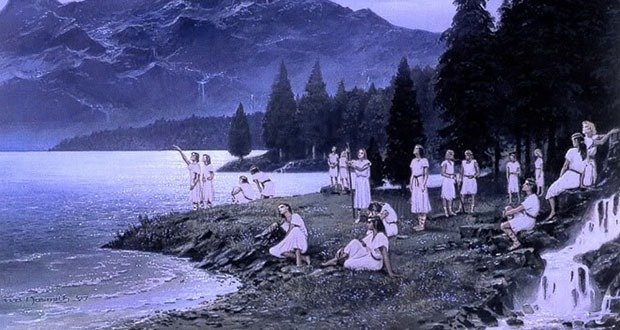 Although the Valar had the power to shape Arda, they could not create sentient life into it. Elves and Men were the first two races created by Eru. They were created directly by him, without the assistance of the Ainur, which is why they are considered his children.

Elves came well before Men. They awoke at Cuiviénen, the Water of Awakening, in the far east of Middle-Earth. Elves were separated into three clans: the Vanyar, Ñoldor, and the Teleri.

Melkor, the first dark lord, was able to locate and capture some elves that had not yet awoken. Through his evil, he tortured and corrupted these elves and they became the first orcs.

09. The Waking of the Elves & Discovery 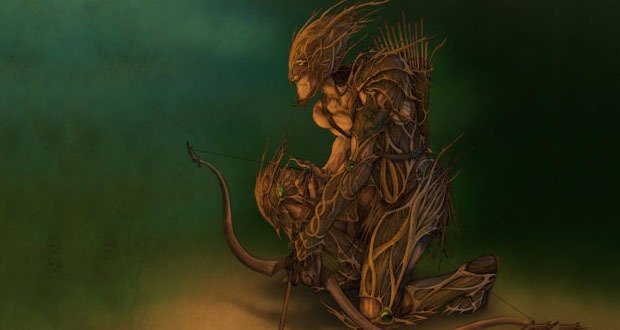 In the beggining, the elves lived in peace. They invented their own language, and called their race the Quendi, those that speak with voices, or Eldar, the people of the stars. The first elves to awake were Imin, Tata and Enel, which means First, Second and Third accordingly, along with their wives. As they walked, they found more elves, which they each claimed for his. All of these elves were 144, which is why that was the elves’ highest number for a long time.

They were discovered by the Vala Orome, who was the only Vala to still go to Middle Earth from time to time. After he stayed with them for a while, he went back to Valinor, where he talked to the other Valar about them. Then, they decided to fight Melkor, the evil Vala, to protect the elves. Of this war the elves know little. 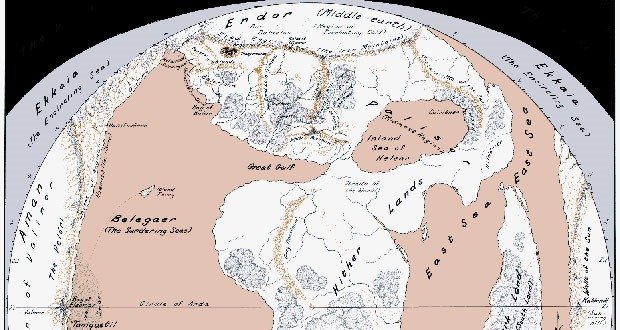 After the war against Melkor ended and he was captured, the Vala invited the elves to Valinor. They were hesitant, so each clan chose a leader to go first. When they returned, they spoke of the splendour of Valinor, and most elves were persuaded, although some still refused. Those elves are the Avari, the Unwilling. The rest traveled in their clans. The Vanyar were led by Ingwe, the Noldor by Finwe, and the Teleri, because they were many, by the brothers Elwe and Olwe. Of them, all except Olwe had gone to Valinor already.

The Vanyar were the first to leave. They travelled quick and they all made it to Valinor, followed by the Noldor, who also made it all to Valinor. The Teleri though were not that fast and many split, including Elwe, who fell in love with the Maia Melian and stayed behind. All the Teleri that stayed behind would form the Nandor, Laiquendi and Sindar elves. Eventually, after waiting for a long time in the shores of Middle Earth, in which time they grew to love the sea, the remainder also went to Valinor. All of this transportation to Valinor happened by unrooting a whole island and carrying the elves there.