Here are 10 Interesting Images from WWII. 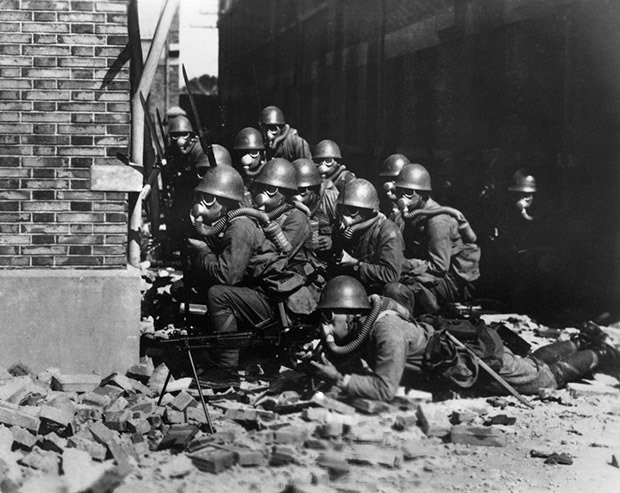 Soldiers of the Imperial Japanese Navy’s Special Landing Forces fight house-to-house during a Japanese gas attack in Shanghai. The Japanese made wide use of chemical weapons in the conflict, including phosgene, mustard gas, Lewisite, and chlorine. Japan’s attempt to create a “Greater East Asian Co-Prosperity Sphere” led to the deaths of almost 20 million people, over 12 million of whom were Chinese. For China, WWII began in 1937.

02. The First Shots of the War in Europe 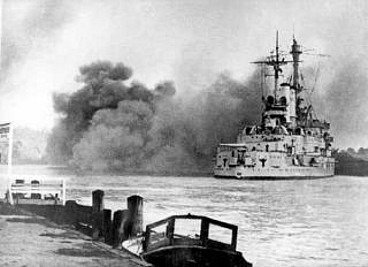 Poland, 1939. The ancient German pre-Dreadnought battleship “Schleswig-Holstein” bombards the Westerplatte in Gdansk, and in so doing fires the first shots of a war that will consume sixty million lives and create the modern world. The 200 Polish troops entrenched there held out for a whole week before being forced to surrender in one of several “Polish Thermopylaes.”

03. The Maus that Roared 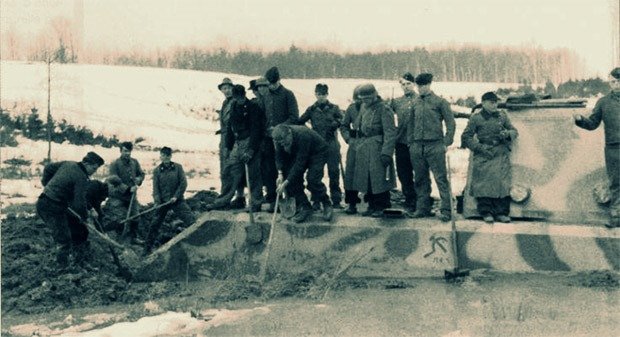 German soldiers stand atop the hull of a mudstuck Panzer VIII Maus, an 188-ton super-heavy tank designed by Ferdinand Porsche. The hammer and sickle on the side of this vehicle was created to fool Western Allied intelligence into thinking it was a captured Soviet vehicle. A colossal waste of time, talent, and steel, Maus production was knocked out by a British air raid on the Krupp works at Essen, and the two prototypes broke down and were blown up by their crews on their way to fight the Soviets in 1945. The Soviets cobbled what was left of them into an emtpy Frankentank, which you can go see in Kubinka Tank Museum just outside Moscow.

04. Hubris. Noun: A great or foolish amount of pride or confidence 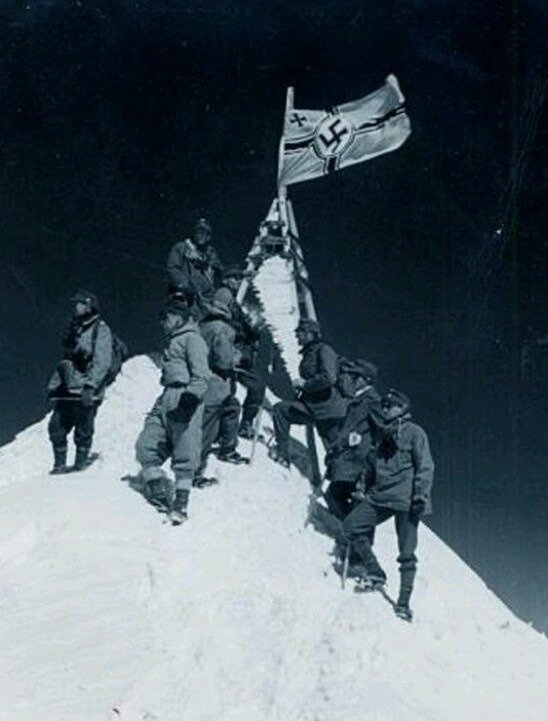 Russia, 1942. German mountaineers raise the Reich War Flag at the summit of Mt Elbrus in the Caucasus range, the highest mountain in Europe. This type of fate-tempting gesture would ordinarily have thrilled Hitler, but he was so nervous during the German drive into the southern USSR to seize the oilfields of Transcaucasia that he flew into one of his biggest ever rages at these “irresponsible mountain-climbers indulging their silly hobbies” in the middle of a war and demanded the commander responsible be relieved. 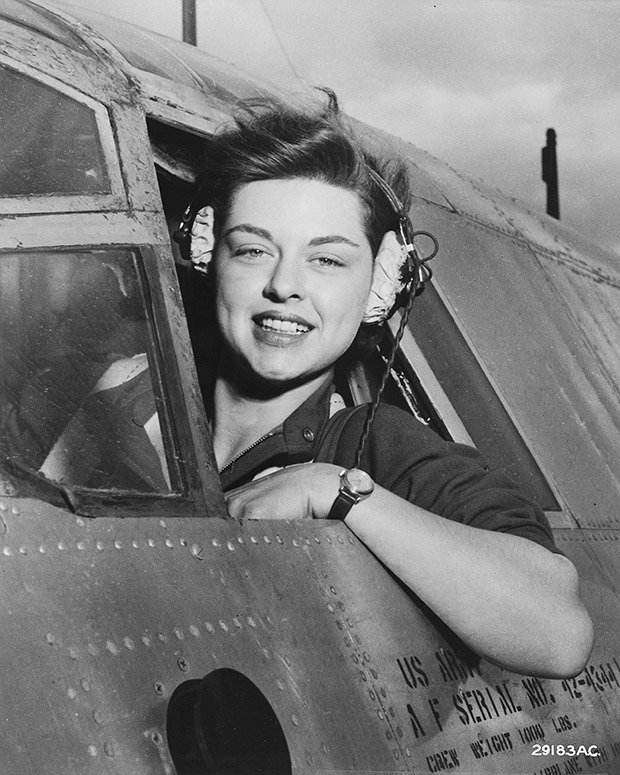 Elizabeth Gardner, a Women’s Airforce Service Pilot, or WASP, poses from the window of a B-26 Marauder light bomber. The WASPs flew over 60 million miles and delivered over 12650 aircraft, generally shuttling aircraft all over the USA and to the USSR via Alaska. 38 died. For doubtlessly lame reasons, details of WASP activity were classified for 35 years. After a long fight, they were awarded veteran status in 1977 and awarded the Congressional Gold Medal in 2009.

06. What Could Possibly Go Wrong 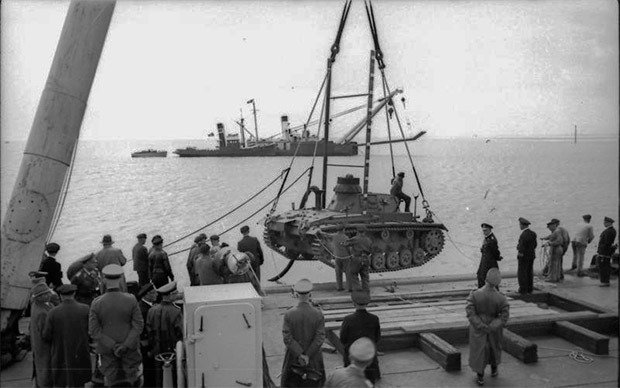 A Tauchpanzer III is lowered into the water for testing in preparation for Operation Sea Lion, the planned invasion of Britain. Because the Germans had so few landing craft available, the Tauchpanzer was supposed to be lowered into the water close to shore, and drive along the seabed and up the beach to support a landing. This was a silly idea. In a roundabout way, Hitler’s decision to abandon the invasion of Britain is one of the great tragedies of WWII, as he was so poorly prepared that it would have been a swift and colossal defeat for Germany and almost-certainly have shortened the war. 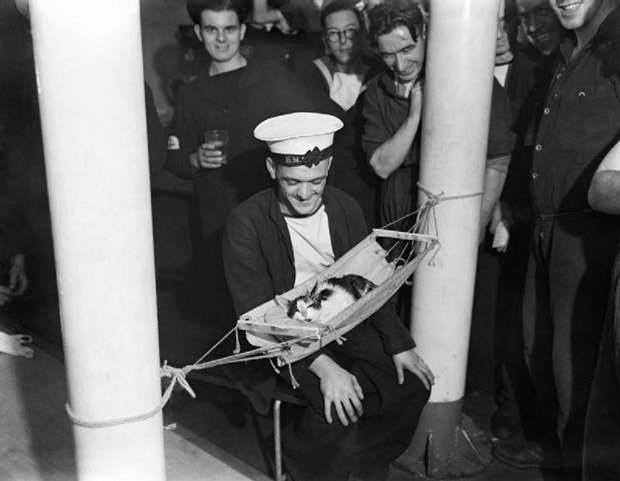 Convoy, the ship’s cat of the light cruiser HMS “Hermione”, relaxes with his shipmates at Gibraltar in 1941. Convoy and 87 of his shipmates were killed when a U-205 torpedoed the “Hermione” in 1942. Over ten million animals – dogs, horses, cats, oxen, elephants, pigeons – have died in the service of British forces throughout history. They are commemorated with a memorial in Hyde Park, which reads simply:

“They had no choice.” 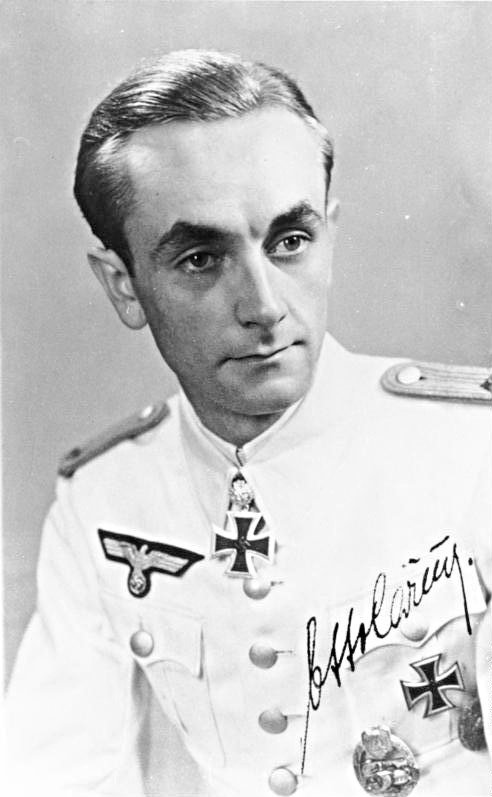 Otto Carius, a German tankist of the 502nd Heavy Tank Battalion and possibly the deadliest tank commander of all time. Carius destroyed around 100 tanks (Nazi propaganda inflated this figure to 150) and one aircraft (!) with his Tiger. Despite being shot six times – in one day – he survived the war and opened a pharmacy in the Palatinate. He died in 2015, aged 92.

09. Are you sure we’re on the right side 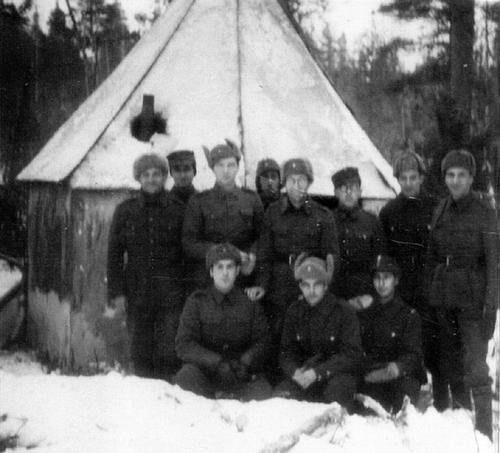 The Finnish Army’s field synagogue for Jewish troops, unique in Axis-affiliated Europe. Finland was the only democracy on the Axis side, and was officially merely a “co-belligerent” rather than an ally of Germany. She entered into WWII in order to recover territory lost during the Soviet invasion and Winter War of 1940; this plan failed, and Finland once again lost territory, though it avoided Soviet occupation. 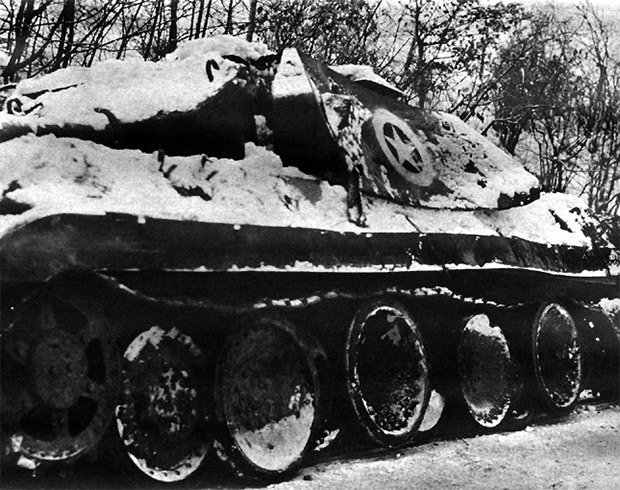 A German Pz V Panther medium tank, disguised as an American M10 tank destroyer for Operation Griffin, an attempt to infiltrate and sabotage Allied lines using disguised English-speaking troops. It’s effect was more psychological than military, with panicking American troops holding Brig. Bruce Clarke prisoner for several hours after he got a “security question” wrong (he thought the Cubs were in the American League). Dressing in enemy colors, incidentally, is a war crime.

Galena: Brought to you by the letter Badass [Educational Album]