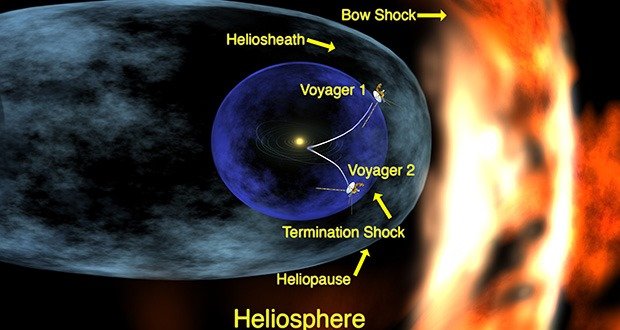 The heliosphere is a vast region of space surrounding the Sun, a sort of bubble filled by the interplanetary medium and extending well beyond the orbit of Pluto. Plasma “blown” out from the Sun, known as the solar wind, creates and maintains this bubble against the outside pressure of the interstellar medium, the hydrogen and helium gas that permeates our galaxy. . The magnetic fields generated by the plasma in the sun protect the solar system from cosmic radiation of the outside galaxy. – Source 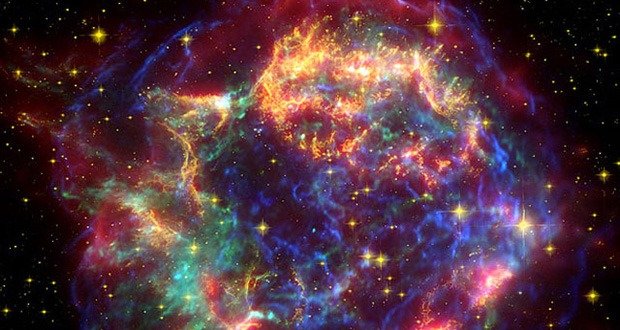 During nuclear fusion in a star, hydrogen fuses into helium. When the whole hydrogen fuel is used up, gravity starts winning against exploding force, and the star contracts. When it starts falling (contracting), it heats up and this heat generates enough energy for Helium to fuse together. This process continues and goes from Helium to Carbon to Oxygen etc. until it reaches Iron. When all of the star’s mass is fused into Iron, it marks the end of the star’s life. The heavier elements come from Supernova. During a supernova heavy elements rapidly fuse during the explosion. Also, not all stars produce Iron in their sequence. The duration is so small and tiny that the elements you see after Iron are very rare in Universe. Eg: uranium, Plutonium etc. Higher you go in Periodic Table, rarer it is to see that element in Universe.” The element Gold might actually require the merger of two neutron stars. 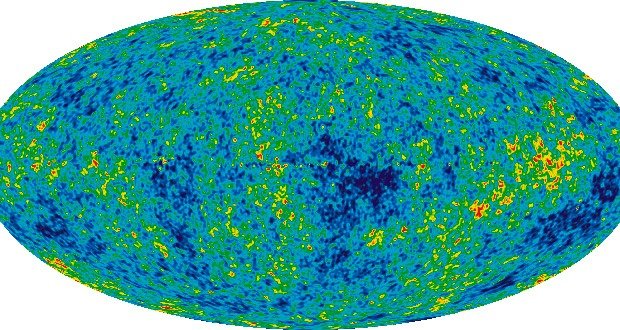 The Cosmic Microwave Background is the radiation left over from what can only be assumed is the Big Bang. When the universe was very young, it was very dense and small. It would have also brightly glowed from the heat. The light from this primordial universe has been propagating ever since. Over time the colors have red-shifted into the microwave band. The radiation itself is a massive deal for astrophysicists because it provides a brief fleeting glimpse into the very early universe.

Today, the observable universe extends 13.8 billion years away from us, in all directions. Before cosmic inflation that same space and all the matter in it would have fit into a volume much, much smaller than a proton. We have no reason to believe space does not extend beyond that – the light has not had enough time to travel farther, and back then light could not travel in a straight line because space was so dense and hot that all photons kept colliding with matter and being scattered in different directions. – Source 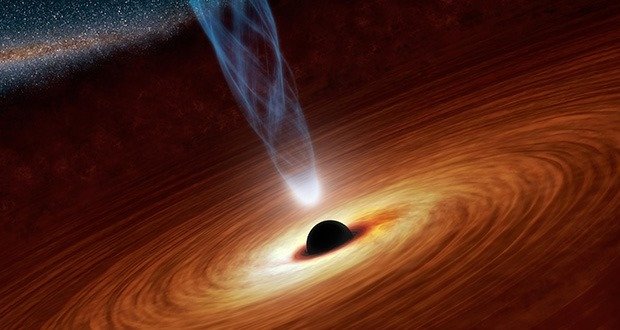 Hawking Radiation is the theoretical disintegration of black holes over time. The premise goes that throughout the universe there are ever constantly appearing particle and anti-particle pairs. They suddenly exist, attract one another and then destroy one another. The anti-particles have a negative mass. Stephen Hawking (for whom the radiation is named) surmised that the particle could escape the pull of a black hole but its anti-particle twin could not. The negative mass would gradually lower the incredible mass of the black hole to the point of dissipation. The particles that escape could then be measured as basically heat. – Source 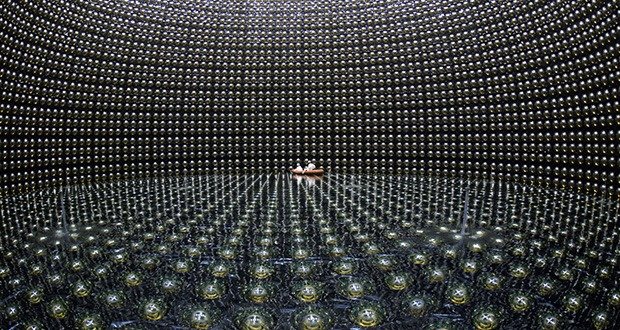 This is an image of the Kamioka Observatory in Japan. It was built underground so that other background radiation sources cannot affect the experiments it conducts. This observatory measures Neutrinos. Neutrinos are particles which barely interact with matter. They fly past/through solid objects and are incredibly difficult to detect. Billions fly through every square inch of you coming from the Sun and cause you no harm whatsoever. It’s theorized that to catch and detect Neutrinos from the sun for certainty you would need a light year long strip of Lead. In astrophysics, neutrinos allow us to make some assumptions about the chemical/atomic processes that are going on in certain astronomical events. This is because they are only created under certain conditions such as fusion. Neutrino detectors like this are basically huge underground pools surrounded by photomultiplier tubes that can detect photons emitted by interactions between neutrinos and water. – Source 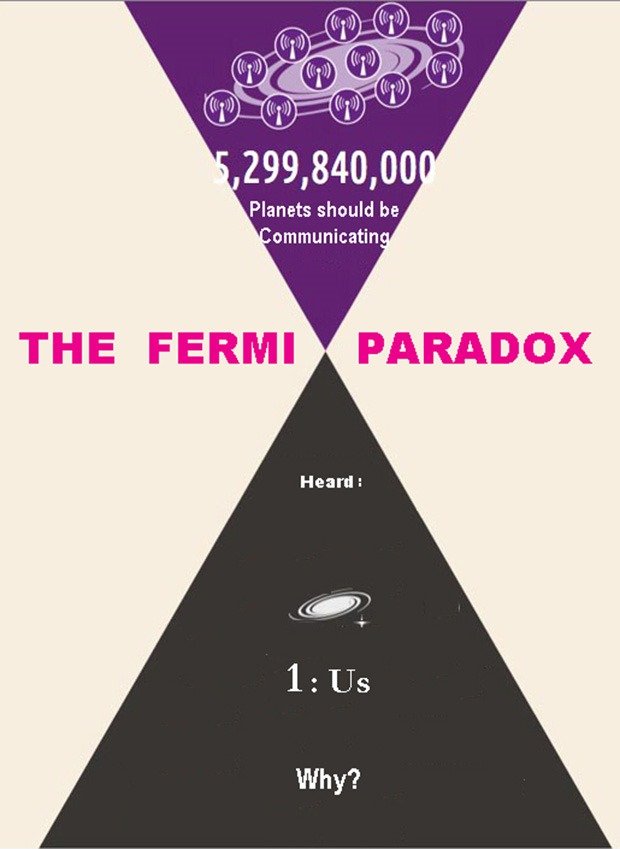 The Fermi Paradox is a paradox of essentially what we have calculated and what we actually perceive in regards to extraterrestrial life. The general premise is that there are estimated billions and billions of sun like stars in the Milky Way galaxy and trillions of planets sometimes billions of years older. If the Earth is typical, then by odds alone there should be millions of potential advanced civilisations out there. A civilisation just 1000 years ahead of ours should be capable of space travel.

So where is everyone? Why can’t we detect energy signatures from communications or evidence of Aliens anywhere we look? There are a number of potential explanations:

· The Earth could be considered a nature reserve or there could be a non-interference policy that is shared.

· One dominant species has conquered and destroyed all the others.

· Humans are the intellectual exception to the evolution of life. 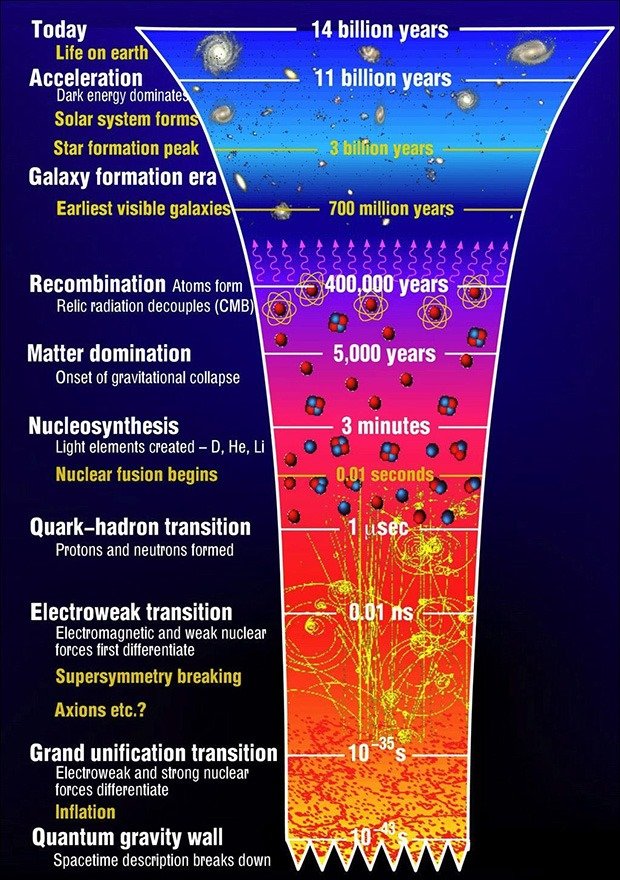 At some point 13.8 billion years ago the universe was compressed into an area smaller than an atom. We know this because the fabric of the universe is expanding and stretching (galaxies are red-shifting further away all the time). What is interesting is that not only was space “born” at that single point but also time. In essence, there was no “before.” There exists a fixed point where general relativity breaks down. This is because general relativity relies on space and time being interwoven and if space didn’t exist until after the bang then neither did time. So how can causality apply? In this prevailing theory, the Big Bang just happened spontaneously. This is only one theory of the origins of the universe. Another prevailing theory is that at some arbitrary point the universe begins to contract greatly (The Big Crunch) before it begins expanding again. This would make the universe a circular process with a continuing flow of time. – Source 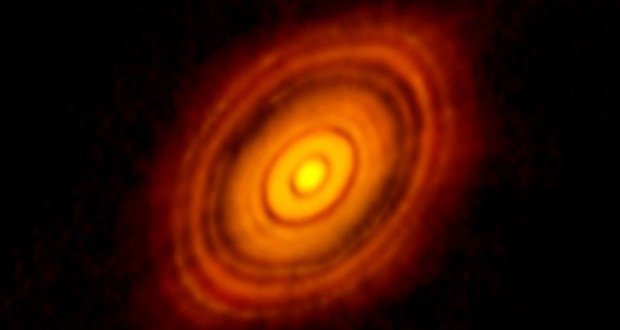 This image is the first direct image ever taken of a Protoplanetary Disk. The line gaps represent ares where the gas/dust has started to clump together and form planets. HL Tau, the star in the picture, is only around a million years old. It has stunned scientists that there are already planetary bodies big enough to cause such large rings. The image is important because it confirms what was, up until now, merely strong hypothesis about the birth of our own solar system. – Source 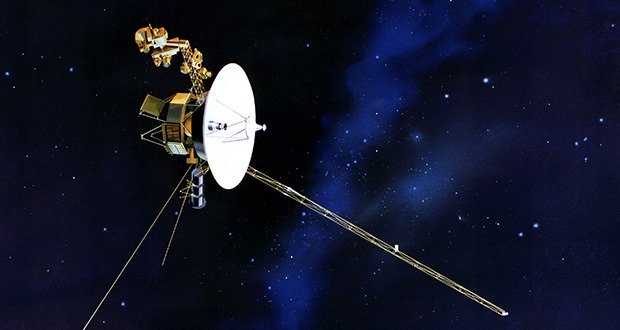 Voyager 1 is the first man-made object to have officially left the Solar System. Launched in 1977, it was originally intended to explore the outer solar system but once its job was done, it was directed to simply keep going. Voyager 1 is actually responsible for the famous image “Pale Blue Dot” made famous by Carl Sagan in this video. If it was to turn around and head back towards Earth at the speed of light, it would take over 34 hours to reach us. Voyager 1 has a sister traveller named Voyager 2. Sooner or later this will also leave the solar system.

10. Largest Ever Image of the Milky Way 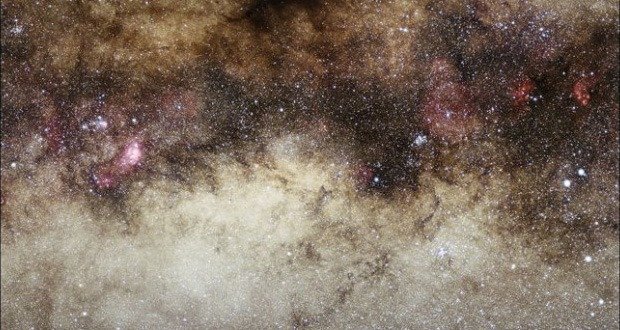 This is the largest most detailed image of the Milky Way ever taken from Earth’s perspective. It is 9 gigapixels in size. On it you can see upwards of 84 million stars.