Here is a list of 10 Kickass and Strange Historical Facts.

10. The Man Who Saved President Reagan 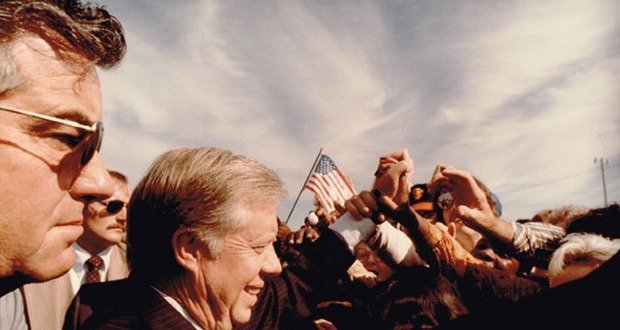 On March 30, 1981 there was an assassination attempt on President Reagan. Jerry Parr (pictured on the left) was one of the Secret Service agents on duty. In fact, he was the one that pushed President Reagan into the limousine after hearing the gunshots. While driving back to the White House (standard procedure), Agent Parr noticed that the President was bleeding and ordered the limo to immediately turn around and go to George Washington Hospital. This decision no doubt saved President Reagan’s life.

Agent Parr had wanted to be in the Secret Service since a young boy, when he watched a 1939 movie called “Code of the Secret Service”, with a young unknown actor playing the part of Agent Brass Bancroft. That actor made some more movies and eventually entered politics, becoming Governor of California and later President of the United States. Indeed, a young Ronald Reagan played a role in a movie which caused a young boy to make a career choice and then save the actor president’s own life 42 years later. 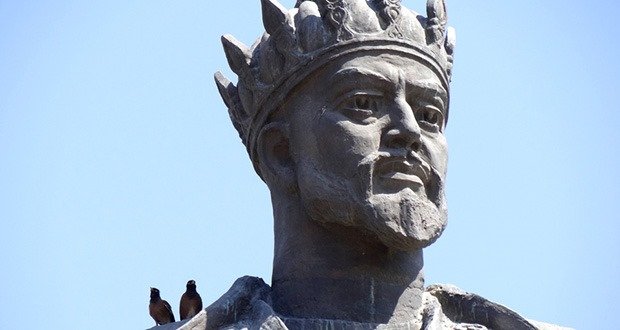 A warlord and nobleman who controlled a vast swath of Asia during the 14th century, Timur (aka Tamerlane) was renowned as a military tactician whose warfare killed some 17 million people. He was also a celebrated patron of architecture and the arts, however. In 1941, Joseph Stalin sent a team of archaeologists to open Timur’s tomb in Samarkand, Uzbekistan, much to the alarm of local residents and Muslim clergy. Upon opening Timur’s coffin, the team discovered an inscription: “Whoever opens my tomb shall unleash an invader more terrible than I.” Within a matter of hours, Adolf Hitler’s troops invaded Russia; an estimated 26 million people died as a result. In 1942, Stalin ordered Timur’s remains to be reinterred back in Samarkand in accordance with Islamic tradition; shortly thereafter, the German army surrendered at Stalingrad, ending their campaign against the Russians. 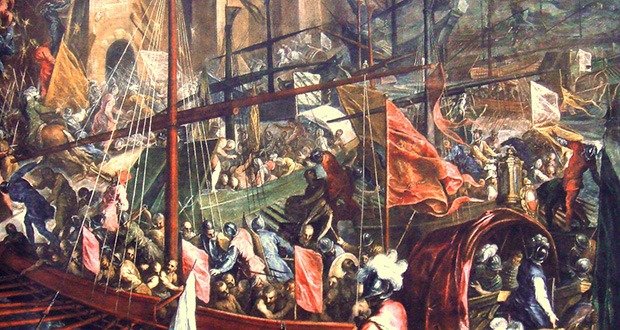 A crusade to retake Jerusalem is called by the Pope after the failed third crusade, and a record amount of people sign up. However, when the crusaders showed up in Venice to get on the fleet they ordered, it turns out that only like a quarter actually showed up and they can’t pay for the whole fleet. Venice wants their money, and so they agree to give the crusaders the fleet at reduced price if the crusaders would do some simple conquering for Venice in return. The crusaders agree and conquer a few cities along the Adriatic. The problem is that those cities were Catholic Christians, and so the pope excommunicates the whole crusade.

The crusaders who have travelled far to kill Muslims begin tearing the place up and it all devolves into a several day long sack of the largest and richest Christian city in the world. A thousand years of irreplaceable Roman relics are stolen, melted down or vandalized including many Christian relics. The Venetians focus on stealing as much as they can including Horses of Saint Mark, but the other crusaders mostly destroy stuff, rape women, slaughter the men. While the Roman Empire was generally seen as very weak by this time and did survive almost 200 years more, the fourth crusade was really the nail in the coffin for the empire created by Augustus 1200 years earlier.

It’s all especially ironic considering the first crusade was in response to the Roman emperor’s call for help from the Pope against the Muslims.

7. The Beginning and End of American Civil War 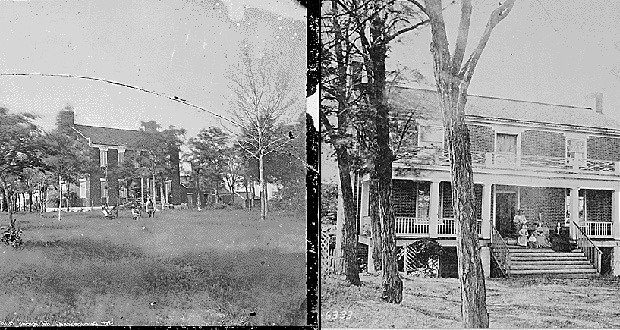 The first battle of the American Civil War took place at Bull Run on Wilmer Mclean’s farm. A cannonball dropped through the kitchen fireplace. Fed up with the war and for the protection of his family he moved 120 miles away to Appomattox Court House, Virginia. On April 9, 1865 a messenger knocked on his door to ask if they could use his house to negotiate the conditions of the South’s surrender. The War Started in his back yard, and ended in his parlor.

6. The Narrative of Arthur Gordon Pym of Nantucket 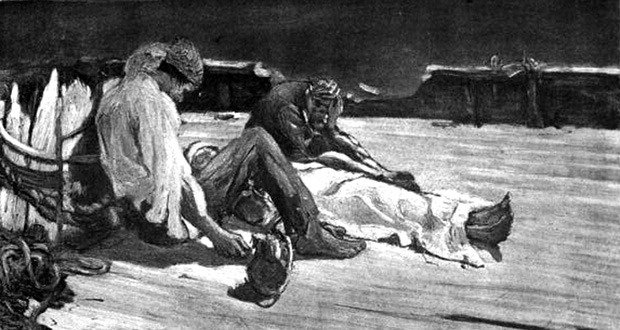 Edgar Allen Poe’s only novel, The Narrative of Arthur Gordon Pym of Nantucket, pretty much came true 51 years after he wrote it.

In 1838, Poe’s only novel was published – The Narrative of Arthur Gordon Pym of Nantucket. Partway through the book, the crew of a ship called Grampus find themselves with a busted boat and no food or water. They manage to catch a tortoise and strip off its shell, but eventually, in order to survive, the crew draws straws to figure out which of them will be sacrificed to provide meat for everyone else. The death straw goes to a former mutineer named Richard Parker, who is promptly stabbed to death; his head, hands and feet thrown overboard. This keeps the floating Donner Party alive a little bit longer, but the two remaining crew members are still on the brink of death when they are finally rescued.

A creative story and Poe actually called it “very silly,” but here comes the real twist. In 1884, a yacht named the Mignonette left England, headed toward Sydney, Australia.

The yacht wasn’t really made for trips around the world, so it shouldn’t have been a surprise to anyone when it sank in a storm. The four-man crew barely escaped in a lifeboat, but they definitely didn’t have enough provisions for survival. They did catch a turtle and eat it, but just like their counterparts in the 45-year-old Poe’s tale, they needed more if they were going to be found alive when a rescue boat found them.

One man, a 17-year-old named Richard Parker fell overboard and then made the mistake of drinking seawater to attempt to quench his thirst. Parker started going downhill fast, and that’s when his fellow survivors decided they would kill him to ensure their own survival. The men had considered drawing straws, but they figured Parker was so far gone they might as well kill him and drink his blood while it was fresh (instead of risking the contaminated blood that might occur if they just waited for him to die due to illness). After stabbing Parker in the throat with a penknife, the three men devoured him. They were rescued a few days later. 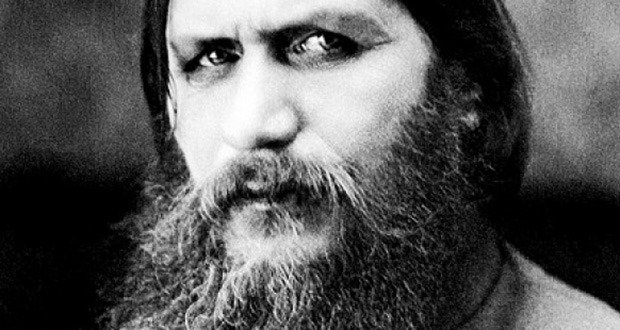 Grigori Rasputin was poisoned, but he didn’t die. So he went after the guys who poisoned him, and they stabbed him. He still didn’t die and kept going after the assassins, so they shot him and thought they had finished him. His eyes opened and he lunged for one of the assassins to strangle him, so they shot him some more, this time he started to crawl away. They then thrashed him, tied him up, threw him in a sack, and threw the sack into the river. Two days later the sack was recovered, and it looked like Rasputin almost escaped his bindings and clawed out of the bag. To top it all, while his body was being burned, the tendons shrunk and he sat up in the fire. 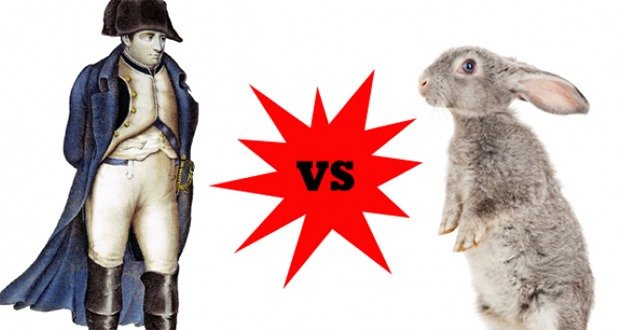 It was a fine summer in 1807. Napoleon was in high spirits having signed The Peace of Tilsit, and to celebrate, Napoleon suggested that the Imperial Court should enjoy a lavish rabbit hunt, organized by his trusted chief-of-staff, Alexandre Berthier. Berthier was so keen to impress that he had bought hundreds of rabbits to ensure that the Imperial Court had plenty to shoot at. Satisfied that nothing could possibly go wrong, Berthier waited calmly for the guests to take their position.

The shoot commenced, and the rabbits were released by the game keepers, but disaster struck. Instead of scattering in all directions, the horde of rabbits suddenly turned and charged on Napoleon. Confronted by this flood of rabbits, the Emperor’s escort formed a skirmish line to protect him, but, in the words of historian David Chandler, “with a finer understanding of Napoleonic strategy than most of his generals, the rabbit horde divided into two wings and poured around the flanks of the party.” As the Emperor fled to the relative safety of his coach, the rabbits pursued, some allegedly even leaping into it, so that he had to lend a hand in ejecting them even as his coachmen whipped up their horses.

In the aftermath, it transpired that Berthier, despite all his attention to detail, had procured not wild rabbits, but domesticated ones. Thus, when they espied the Emperor and his coach coming towards them, they thought he was their keeper bringing good things to eat and acted accordingly.

3. The Wreck of the Titan 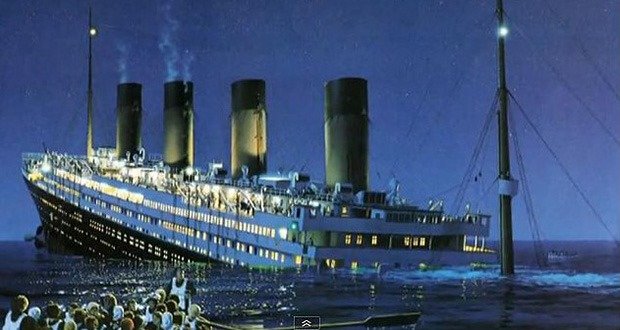 A luxury liner embarks on her first voyage with much fanfare, only to hit an iceberg and capsize. Sound familiar? But this isn’t an account of the RMS Titanic. This is the plot of The Wreck of the Titan, a novella written by Morgan Robertson. Wreck was published in 1898, more than a decade before the real-life wreck of the Titanic.

The similarities between the fictional and the real-life are astounding. Both were considered glorious feats of modern engineering, were touted as being practically unsinkable, contained less than half the number of life boats required, and were struck by icebergs on their starboard side, taking half of their passenger’s lives. Finally, both the Titan and the Titanic sank in the North Atlantic Ocean on a night in April. 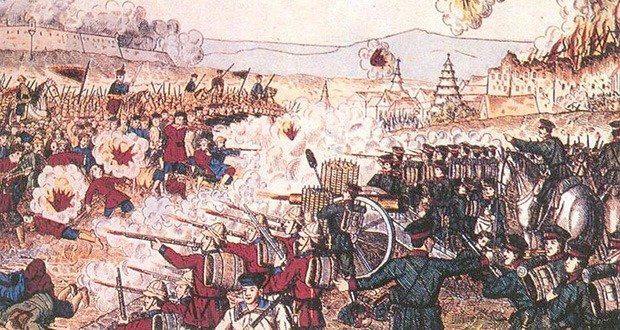 The Taiping Rebellion was started by Hong Xiuquan, a Chinese peasant who dreamed (and believed) that he was Jesus’ younger brother. Although poor, the first thing he did was have a giant demon slaying sword forged. He took over a city, asked the British why they wouldn’t pay him tribute as the new head of their faith. He engaged in total war with the Qing, applied pseduo-communist policies like abolishing private property, separated women and men from ever interacting, and sent the women to the front lines. Over 20 million people died, with some estimates as high as 40 million. It was the fourth deadliest conflict in human history. This war killed more people than WWI. Only WWII, the transition of the Ming, and Qing conquest of the Ming were deadlier. 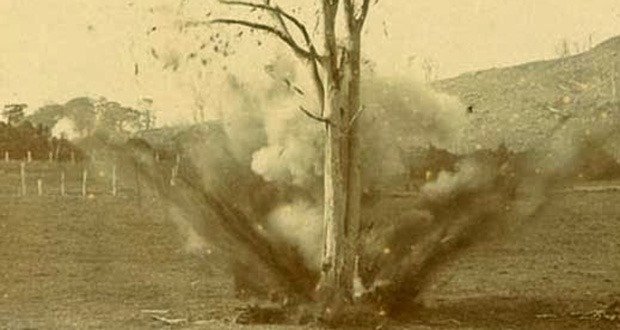 Henry Ziegland thought he had dodged fate. In 1883, he broke off a relationship with his girlfriend who, out of distress, committed suicide. The girl’s brother was so enraged that he hunted down Ziegland and shot him. The brother, believing he had killed Ziegland, then turned his gun on himself and took his own life. But Ziegland had not been killed. The bullet, in fact, had only grazed his face and then lodged in a tree. Ziegland surely thought himself a lucky man. Some years later, however, Ziegland decided to cut down the large tree, which still had the bullet in it. The task seemed so formidable that he decided to blow it up with a few sticks of dynamite. The explosion propelled the bullet into Ziegland’s head, killing him.

(This article was originally posted on September 5, 2014)

25 Uplifting Headlines of the Week - Part 32