Here are 10 More Extinct Nopes that You Should Really be Glad are Dead. 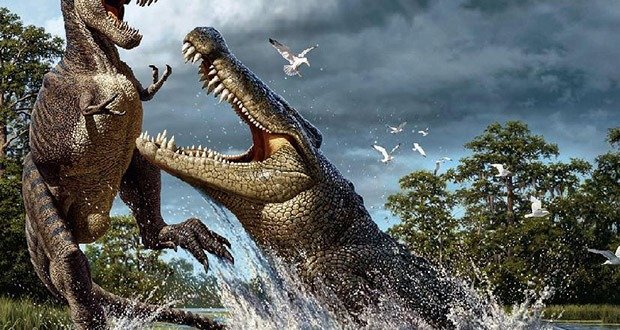 Deinosuchus was a giant croc. Living 30 million years after the extinction of Sarcosuchus, Deinosuchus took on the mantle of “dinosaur killer “, even though it’s more closely related to alligators. Deinosuchus hunted in the estuaries in North America when it was split into three separate islands by a shallow inland sea. When those estuaries disappeared, so did this amazing creature. 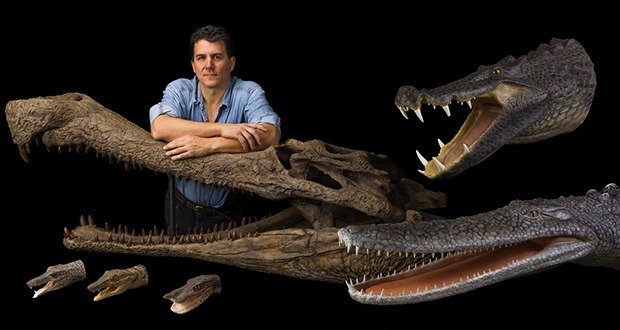 That there is Dr. Paul Sereno. He informed the world about the existence of ancient crocodiles (or crocodyliforms) that we never even knew existed. That there on far right is Kaprosuchus, but the real big badass is right there under Mr. Sereno, Sarcosuchus Imperator. Giant crocodiles seemed to be all the rage back in the Cretaceous period because Sarcosuchus had the power to kill dinosaurs. Estimated to be about 11-12 meters (36–39 feet) in length, it would have rivaled Tyrannosaurus REX in size. 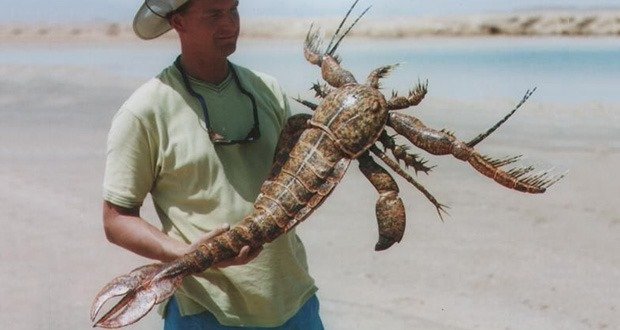 Megalograptus (Greek for “big writing”) was a 4-foot-long sea scorpion that lived from 460 to 445 million years ago. It had spiny legs. Megalograptus did not have a stinger, but may have curled its tail and sword-like telson forward as a threat pose, much like a scorpion. 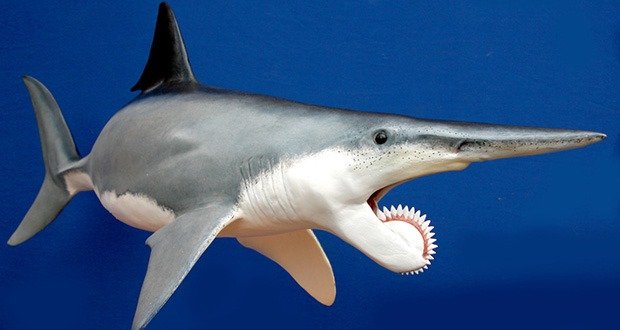 Sharks have been around the earth for at least 400 million years and have survived a lot of extinctions in one form or the other. Helicoprion survived the biggest mass extinction in history (Permian–Triassic extinction event). Up until 2013, the only known fossils of this genus on record were their teeth, which were arranged in a “tooth-whorl” strongly reminiscent of a circular saw.It was not until the discovery of the skull of a related genus of eugeneodont, Ornithoprion, that it was realized that the tooth-whorl was in the lower jaw. The tooth-whorl represented all of the teeth produced by that individual in the lower jaw, in that as the individual grew, with the older, smaller teeth being moved into the center of the whorl by the appearance of larger, newer teeth.Fossils have been found in the Ural Mountains, Wandagee Mountain of Western Australia, China, and Western North America, including the Canadian Arctic, Mexico, Idaho, Nevada, Wyoming, Texas, Utah, and California. 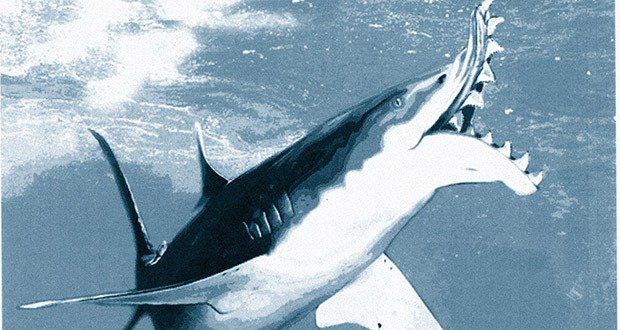 Edestus was a species of shark that lived throughout the world’s oceans during the late Carboniferous period. This species is known only from their teeth. Edestus is a Greek name derived from the word edeste (to devour), in reference to the aberrant quality and size of the species’ teeth. Like its other relatives, such as Helicoprion, and unlike modern sharks, the species of Edestus grew teeth in curved brackets, and did not shed the teeth as they became worn. In Edestus’ case, there was only a single row of teeth in each jaw, so that the mouth would have resembled a monstrous pair of pinking shears. The degree of curvature in the teeth brackets, along with size are distinct in each species. They grew to the size of great white sharks. 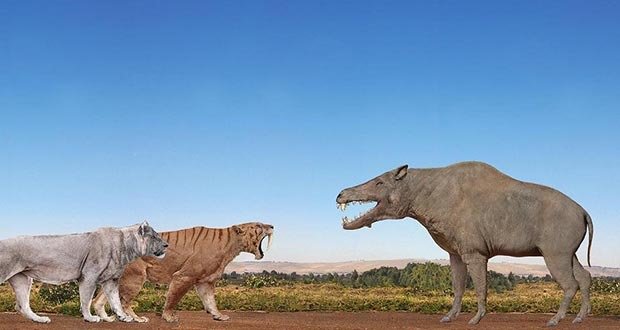 Entelodonts are affectionately named “terminator pigs” or “pigs from hell” because of their uncanny ability to utterly obliterate their prey. But, like pigs, they are omnivorous, eating plant matter when it surfaces. But Entelodonts were mostly the size of your regular cow. Daeodon was the king of all Entelodonts. It had a 90 cm skull (3ft). It stood about 6ft at the shoulders. Like other Entelodonts, Daeodon probably would have had the bite force to crush bone. Daeodon lived throughout North America 29 million years ago to 19 million years ago. 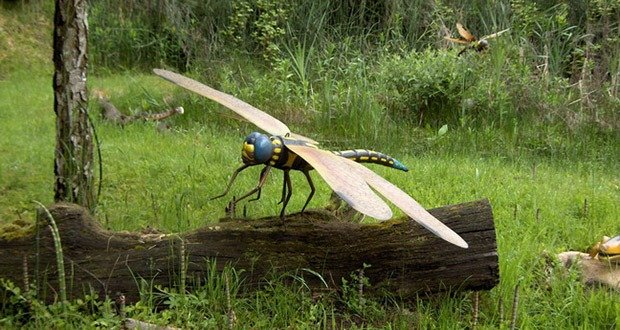 Meganeura lived in the swampy forests of the Carboniferous, reigning the skies. As all dragonflies, they were carnivorous and probably preyed on unsuspecting lizards and amphibians, and fed on them high above the tree line just to be safe. You’d want to protect your 65 cm (25.6 in) wingspan if you’re surrounded by giant scorpions and millipedes. 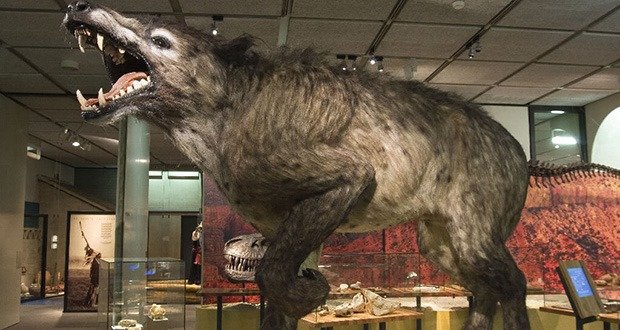 Named affectionately after the famous fossil hunter Roy Chapman Andrews, Andrewsarchus is known only from a single supper jaw found in the Mongolian desert. This creature was possibly the largest land-dwelling carnivorous mammal known. It had a length from the snout to the back of the pelvis of about 3.4 m (11 feet) and a height from the ground to the shoulder or middle of the back of about 1.8 m (6 feet). 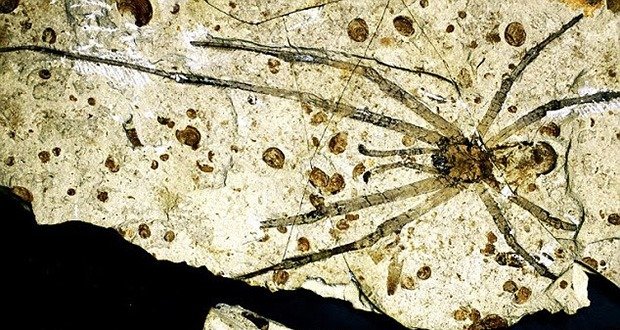 Mongolarachne Jurassica practically looked similar to a regular Nephila spider (4.8–5.1 cm), albeit bigger by a few millimeters. Mongolarachne is described as the largest fossil spider on record. Like modern golden orb weavers, they most likely may have dined on just about anything that passed into their webs. 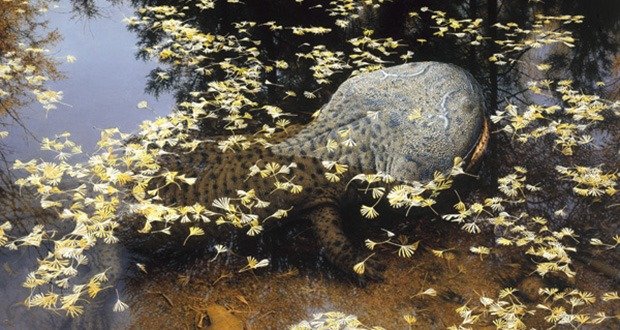 Salamanders are cute. Like those Japanese and Chinese giant salamanders are cute too. One the size of a crocodile that hunted small dinosaurs, not so much. Koolasuchus was basically around 4 to 5 meters (13 to 16 ft) long and weighed around 500 kilograms (1,100 lb). This beast lived in Australia. Koolasuchus, however, was soon replaced by crocodiles when the climate got warmer.

How to spot a liar (Infographic)