Here is a list of 10 Prehistoric animals that were mistaken for Dinosaurs. 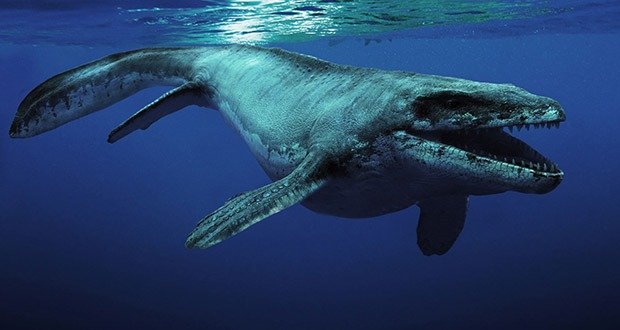 The Meuse River Lizard, or commonly called as the Mosasurus, is a sea animal that is from the reptile family.

Imagine an 18 meter (59 ft) long aquatic Komodo Dragon with a set of jaws within its mouth and the ability to obliterate sharks. That is the best way Mosasaurus can be described. Swimming in the late Cretaceous seas right until the end of the Age of Dinosaurs, Mosasaurus terrorized Europe and North America like an underwater Tyrannosaurus Rex on steroids. Though it does not seem to clearly link to the frilled necked lizard, there are many different qualities the two share, like being cold blooded, having competition over food, a method of being able to run away from predators easily etc. This animal came to be extinct during the Cretaceous Era, where most dinosaurs had became extinct due to some natural phenomenon. Mosasaurus will appear in the movie Jurassic World. 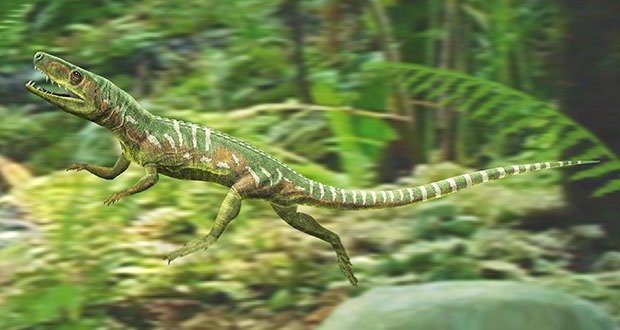 The smallest thing on this list, Euparkeria lived some 245 million years ago in the Middle Triassic period. Dinosaurs haven’t even evolved yet. However, this 55 cm (21 in) little scamp is the granddaddy of all dinosaurs (and birds) that come after it. Giants like Tyrannosaurus, Spinosaurus, Stegosaurus, Apatosaurus, and others, can thank this little guy for their collective 140 million year rule on earth. Euparkeria was quick on its feet and walked on two feet. It had a light, lean body with a long tail and a head filled with tiny, needle-sharp teeth. 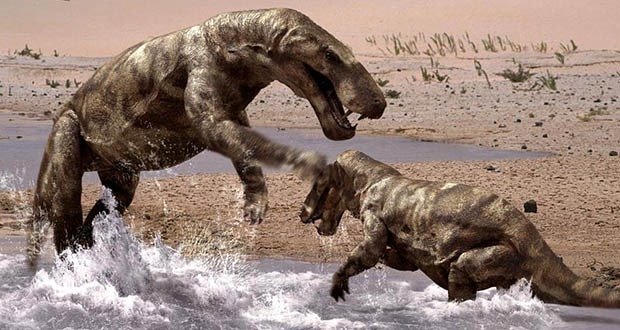 Ruling Russia some 260 million years ago, just a bit before the dinosaurs, and just a bit before the biggest catastrophe in Earth’s history (90% of life died), Inostancevia was a 3.5 meter (11.6 ft) killing machine that developed saber teeth. It was a quadrupedal animal with an upright posture up to 4.3 metres (14 ft) long, the size of a bear. Its two huge sabre teeth were up to nearly 12 cm long and are one of the perfect tools to kill large prey. 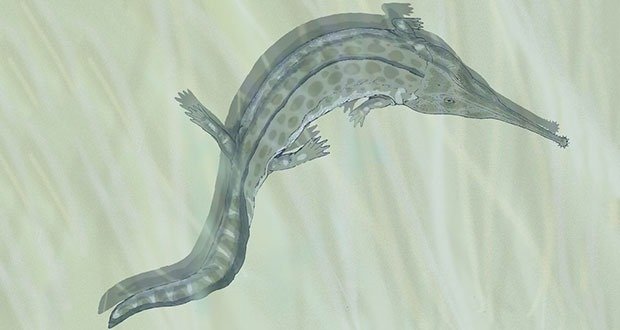 Prionosuchus is a genus of extremely large temnospondyl amphibians from the Middle Permian (270 million years ago). Its remains were found in Brazil. With an estimated length of 9 m (30 ft),Prionosuchus is the largest amphibian ever found. It had an elongated and tapered snout, numerous sharp teeth, long body, short legs, and a tail adapted for swimming. Its general appearance was similar to a modern crocodile, such as the gharial. It probably had a similar lifestyle as an ambush aquatic predator feeding on fish and other aquatic animals. It was one of a group known as the Archegosaurs. The archegosaurs were a group that occupied the ecological niche of crocodiles and alligators during the Permian. 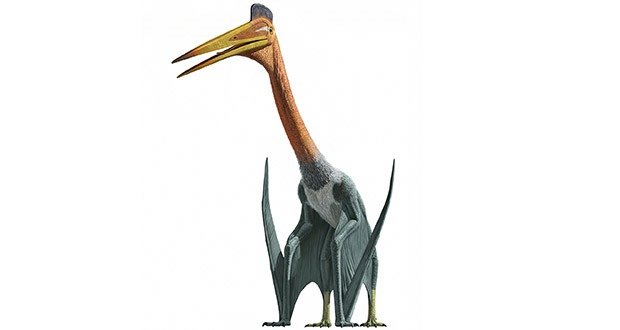 Howver, since Quetzalcoatlus was so large, two researchers suggested it was too heavy to fly.This would have been astonishing, because in the whole fossil record there is no flightless pterosaur. It has been thought their mobility on the ground was too poor for them to survive without flight. However, a recent discussion of this idea concluded they probably could fly after all. Another analysis suggested their flight was quite strong.Since we have only a few bones, the question of weight cannot be settled at present. 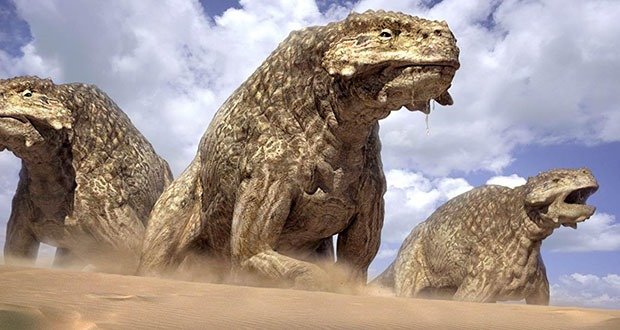 Pareiasaurs are actually distant ancestors of turtles. It was perhaps as much as 2.5–3 m long and weighed a ton and lived in Russia, in the late Permian period. Scutosaurus and its kin had their legs underneath their body to really hold up their weight. As their name suggests, they have several scutes along their back and sides to protect them from predators. 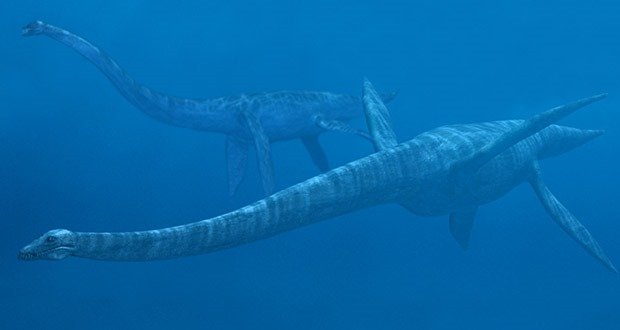 Plesiosaurs are among the groups of prehistoric reptiles that are mistaken for dinosaurs. This 46 foot long swimming reptile lived in North America and weighed about 2.2 tons. This long necked predator was among the largest of all the plesiosaurs. It lived in the Late Cretaceous, sharing the seas with the Mosasaurus. It was first discovered in 1868 by a scientist named Edward Drinker Cope who accidentally put the head on the tail. It had over 70 vertebrae. 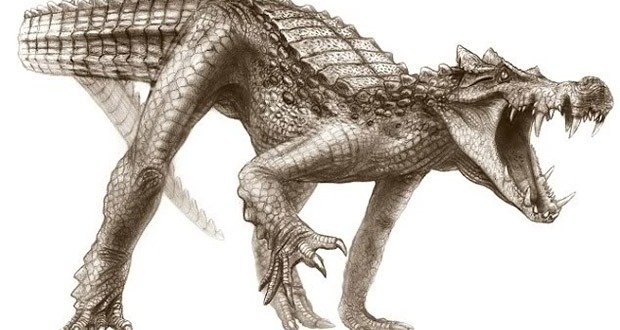 Kaprosuchus otherwise known as the Boar Crocodile was an all terrain dinosaur killing machine. It is known from a nearly complete skull discovered in Niger. It gets its name from its unusually large caniniform teeth which slightly resemble those of a boar. Estimated to be about 6 meters long (20 ft), it was suited for hunting both within the waters, and the floodplains of Cretaceous Africa. 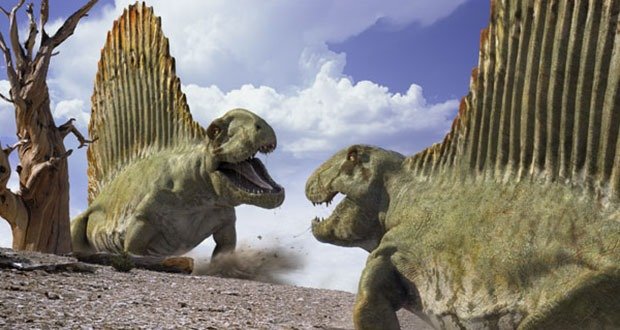 Dimetrodon was a prehistoric reptile from the Permian period (about 309–233 million years ago). It was thought to be a dinosaur with a sail like the Spinosaurus but people later found out that it was a four legged animal. It lived 238 million years ago. Dimetrodon went extinct 40 million years before the first dinosaur even started to walk. The species ranged from 1.7 to 4.6 meters (5.6 to 15.1 ft), and was an avid predator of its time. The sail helped it to regulate its body temperature, warming its body up. 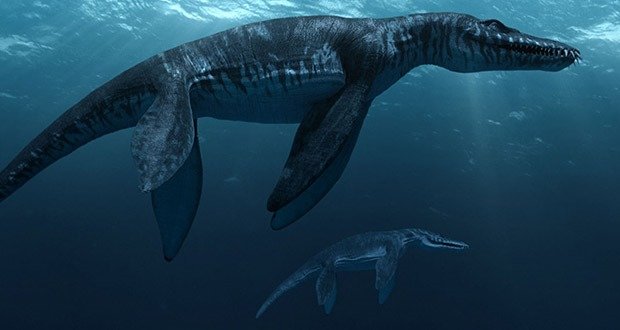 Liopleurodon has gained some attention over the years as being the “biggest” predator that has ever been on this earth. This is not true. It was, in fact, only about 7 meters in length (21 ft). Liopleurodon was a large species of Pliosaur, a group of large submarine reptiles. It was an apex predator in the Upper Jurassic seas, around 160–155 million years ago. It grew up to 6.4 metres long and weighed up to 3 tons. Liopleurodon’s nose allowed it to smell underwater. It could smell prey from some distance away. Despite needing to breath air, Liopleurodon spent its entire life at sea and was unable to leave the water. Consequently, it would have given birth to its young alive and may have visited shallower water to breed.