Here is a list 10 WTF Events From Around the World. 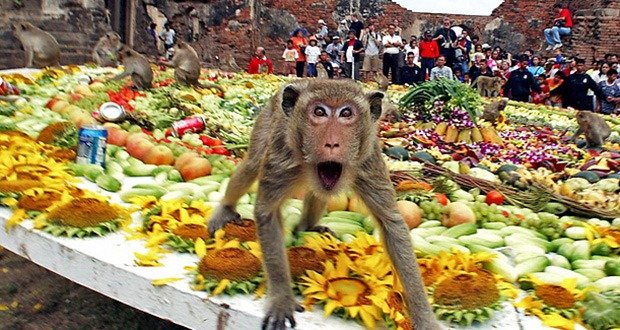 The ‘Monkey Buffet Festival ‘ is held annually in Lopburi, Thailand. In 2007, the festival included giving fruits and vegetables to the local monkey population of 2,000 in Lopburi Province north of Bangkok. Sometimes people involved are prank the monkeys by freezing bananas and other fruits in blocks of ice.

The festival was described as one of the strangest festivals by London’s Guardian newspaper along with Spain’s baby-jumping festival. 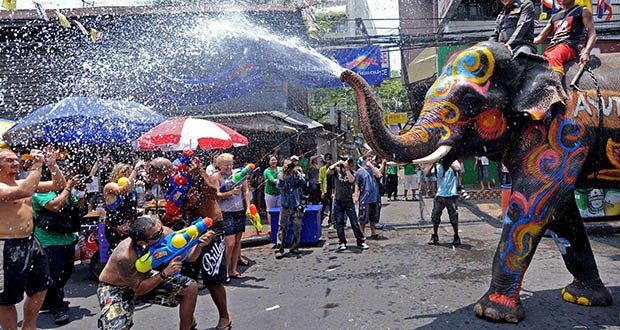 Another Thailand one. Basically the biggest water fight in the world. If you like painted war elephants cleaning dirty hippies, this one’s for you. 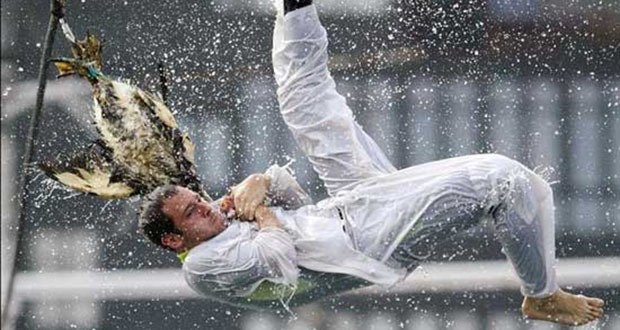 The Day of the Geese, also known as Antzar Eguna, is a competition held as part of the San Antolín festival in the Basque fishing-town of Lekeitio, in which participants attempt to decapitate a goose suspended on a rope above the town harbor.

Step one: cover a goose in grease.

Step two: suspend it on a rope above the harbour

Step three: men jump from boats, grab the goose, and try to separate it’s head from it’s body. Whoever can do it gets to keep the goose. This is likely the least efficient way to get a goose that I can think of. 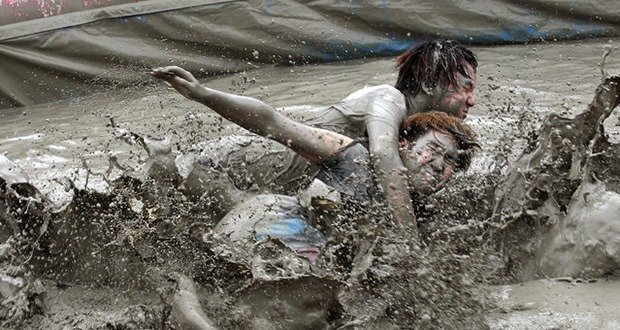 The Boryeong Mud Festival is an annual festival which takes place during the summer in Boryeong, a town around 200 km south of Seoul, South Korea. The first Mud Festival was staged in 1998 and, by 2007, the festival attracted 2.2 million visitors to Boryeong.
The mud is taken from the Boryeong mud flats, and trucked to the Daecheon beach area, where it is used as the centrepiece of the ‘Mud Experience Land’. The mud is considered rich in minerals and used to manufacture cosmetics. The festival was originally conceived as a marketing vehicle for Boryeong mud cosmetics. 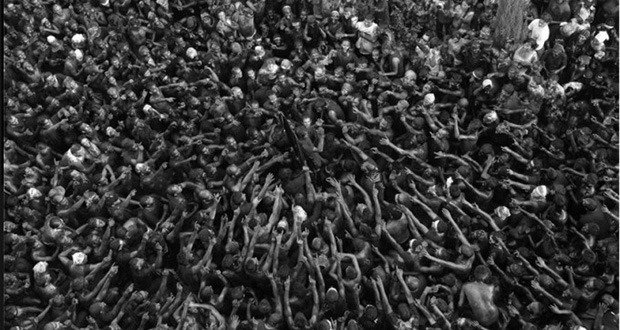 The Fiesta de Cascamorras is a festival that takes place in the towns of Guadix and Baza in the province of Granada, Spain, annually on September 6. The two towns fight for possession of a statue of the Virgen de la Piedad and the participants the object cover themselves in black grease & paint. Spain has the best festivals, cause they’re mostly built on flimsy religious pretext and are an excuse to cover yourself in filth. 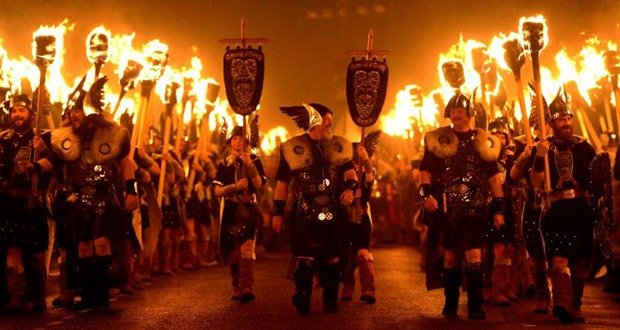 Up Helly Aa, which takes place at the start of each year, is Europe’s biggest fire festival. The event is a visual feast that makes Guy Fawkes Night seem tame by comparison.On the last Tuesday of January hundreds of men don their finest Viking attire, light torches and march through the streets, watched by visitors who travel from around the world to witness the procession, which culminates with the dramatic burning of a galley ship. But despite the ominous presence of hundreds of Vikings, Up Helly Aa is not as ancient a tradition. 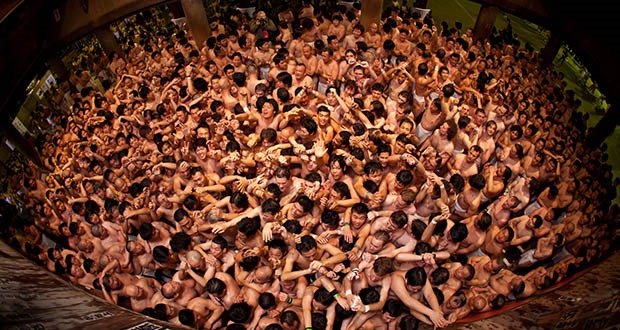 The most famous of the naked festivals is the Saidai-ji Eyo Hadaka Matsuri in the city of Okayama in westernHonshu. This particular Hadaka Matsuri has blown up to legendary proportions. More than 10,000 loin-clothed participants gather at the Saidai-ji temple to vie for the title of “the lucky man,” an honor achieved by catching the shingi or sacred lucky sticks. The one “lucky man” must not only capture the symbolic batons, he must successfully defend himself against 10,000 contending men before thrusting them into a container filled with rice. His efforts are well rewarded, however: Bestowed upon him will be abundance, wealth (a cash prize), and bragging rights for an entire year. 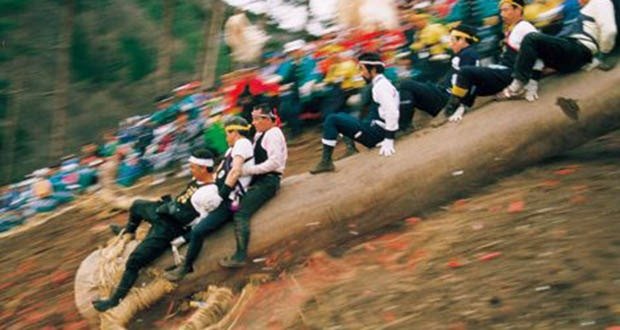 Among the most dangerous festivals in Japan, prepare for carnage as grown men ride a gigantic log down a steep hill to prove their bravery. If you are looking for the oldest and most dangerous festival in Japan, you’ve come to the right place. The Onbashira Festival, held in the Lake Suwa area of Nagano, is one of the most iconic festivals in Japan, offering the perfect excuse to go crazy briefly and risk life and limb. The Onbashira festival is reputed to have taken place, uninterrupted, for 1,200 years (when record keeping began in Japan), making it the oldest festival in the country. 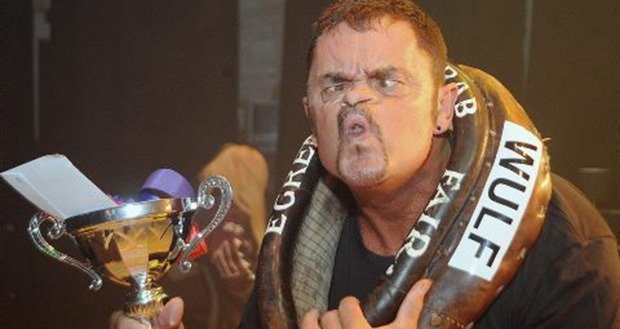 Egremont is a small town in Cumbria, England. Egremont’s Crab Fair is held on the third Saturday in September annually, and features unusual events – such as the world-famous ‘gurning’ and greasy pole climbing. This fair is a major local event, with the town’s high street being closed to normal traffic for street dancing and a parade, while sports such as Cumberland & Westmorland Wrestling are held on ground nearby. The fair’s origins go back to 1267, and it is claimed to be one of the oldest fairs in the world. 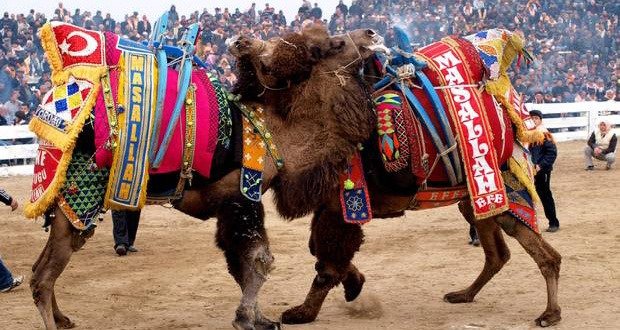 At the beginning of every year, the camel wrestling festival of Selcuk,  begins on the Aegean coast of Turkey. It will run to the end of March when one camel is chosen as the winner in a victorious celebration. It is a great honor for the owner of the camel who will spend all year ensuring his camel is in top condition for the wrestling match. Throughout the event, bets are placed on camels who will wrestle each other to the ground with their long necks. Traditionally done during mating season, a female is often paraded in front of the male participants to ensure they wrestle with determination.

Why does it take 5 seconds for credit card companies to take money out of my account but 5 days to refund it?