01. Tripitaka Koreana at the Haeinsa Temple in South Korea 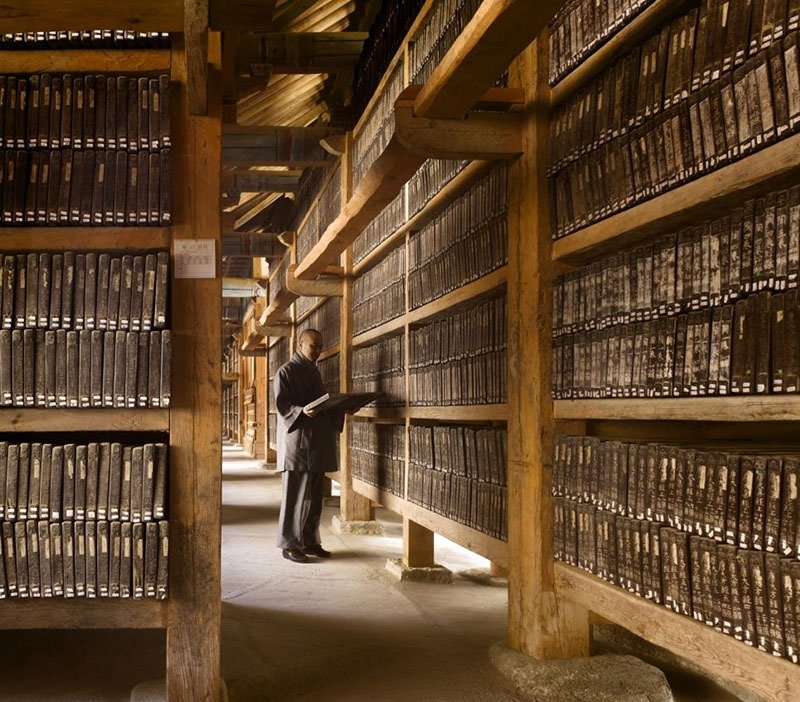 The Janggyeong Panjeon in the Temple of Haeinsa, on the slopes of Mount Gayasan, is home to the Tripitaka Koreana, the most complete collection of Buddhist texts, laws and treaties extant, engraved on approximately 80,000 woodblocks between 1237 and 1248. The Haeinsa Tripitaka woodblocks were carved in an appeal to the authority of the Buddha in the defense of Korea against the Mongol invasions. They are recognized by Buddhist scholars around the world for their outstanding accuracy and superior quality. The woodblocks are also valuable for the delicate carvings of the Chinese characters, so regular as to suggest that they are the work of a single hand. 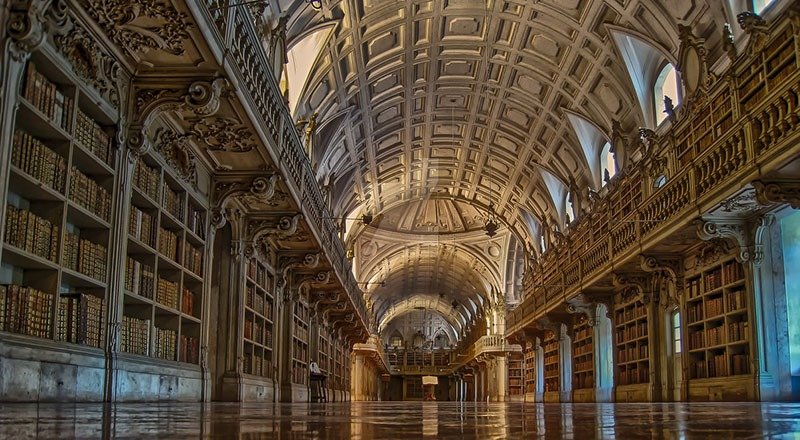 The Mafra National Palace is a monumental Baroque and Italianized Neoclassical palace-monastery located in Mafra, Portugal. The Rococo library, situated at the back of the second floor, is truly the highlight of this palace, decorated with precious marble and exotic wood. It contains 35,000 volumes, including the precious first editions of Camões’ Os Lusiadas, a trilingual Bible from 1514, and the earliest edition of Homer in Greek.

03. The Codrington Library at All Souls College in Oxford 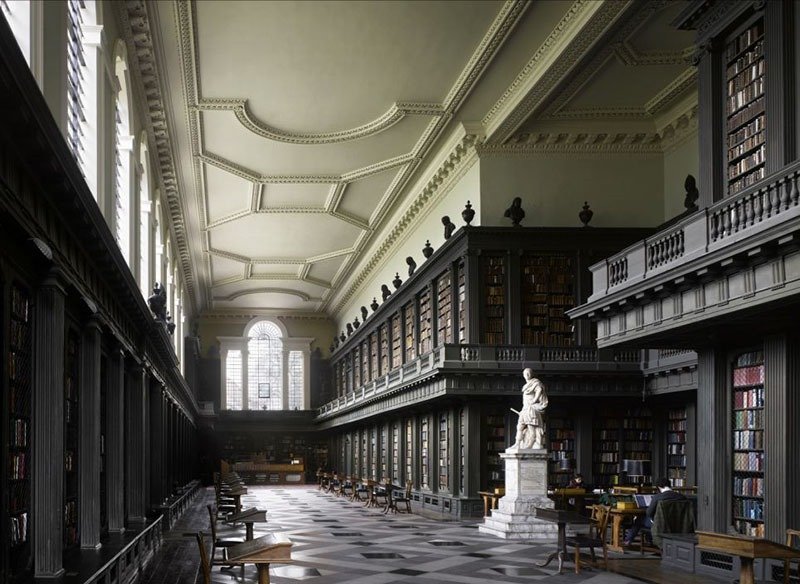 The Codrington Library is a historic academic library in the city of Oxford, England. It is the library of All Souls College. The library in its current form was endowed by Christopher Codrington (1668–1710), a Fellow of the college who amassed his fortune through plantation slavery. The library was completed in 1751, and has been in continuous use by scholars since then. The modern collection comprises some 175,000 volumes, about a third of which were produced before 1800. The library contains one of the largest collections of manuscript and early printed books in the United Kingdom, and attracts scholars from around the world. 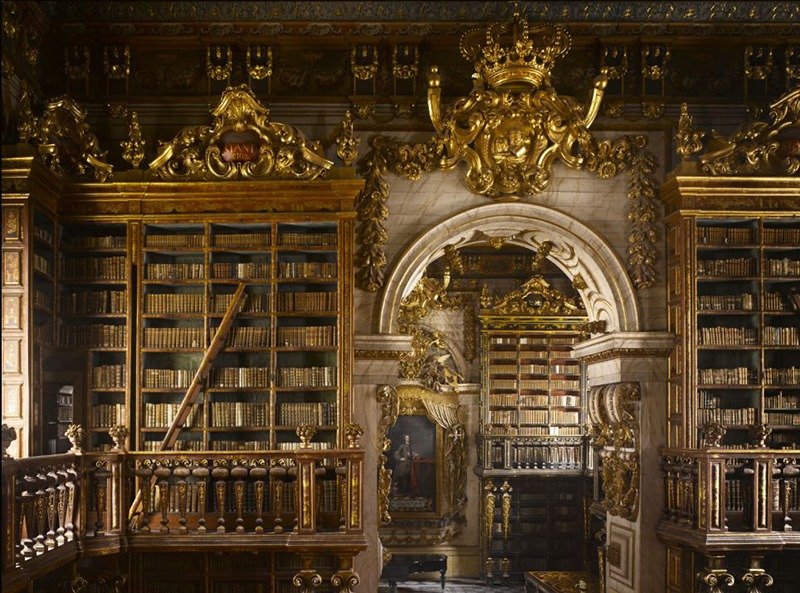 This library, formerly known as House Bookstore, owes its name to Magnanimous King D. John V. Portugal ‘s John the Magnanimous astonished the rector of the University of Coimbra by telling him that his request for help towards library facilities was too modest, the lavish result was financed with gold reserves that had been recently discovered in Brazil.

Over the entrance door, the library exhibits the national coat of arms. Inside, there are three great rooms divided by decorated arches, bearing the same style as the portal and entirely executed by Portuguese artists. The walls are covered by two storied shelves, in gilded or painted exotic woods; the painted ceilings, by the Lisbon artists Simões Ribeiro and Vicente Nunes, blend harmoniously with the rest of the decoration. The library contains about 250 thousand volumes, namely works of medicine, geography, history, humanistic studies, science, civil and canon law, philosophy and theology. It is a National Monument and has a priceless historical value being one of the main tourist attractions among the older monuments belonging to the university. 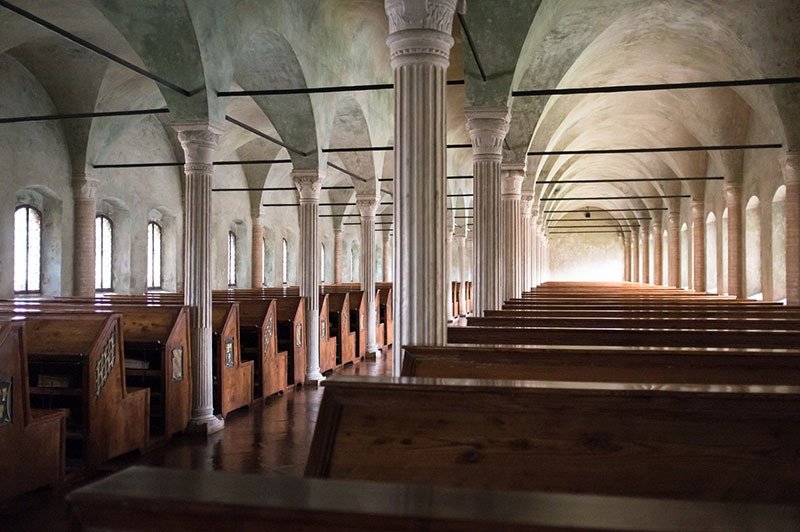 Biblioteca Malatestiana in Cesena in the Emilia-Romagna region of Italy was created by Malatesta Novello, the last lord of Cesena. It is in the wing of the San Francesco Monastry in center of Cesena and it was completed around 1450.

It was the first European civic library, i.e. belonging to the Commune and open to everybody. The Malatesta Library, or reading room, consist of 58 reading desks, 29 in each aisle. The windows on each side provide maximum natural light on the desks while the one at the far end lights the corridor. 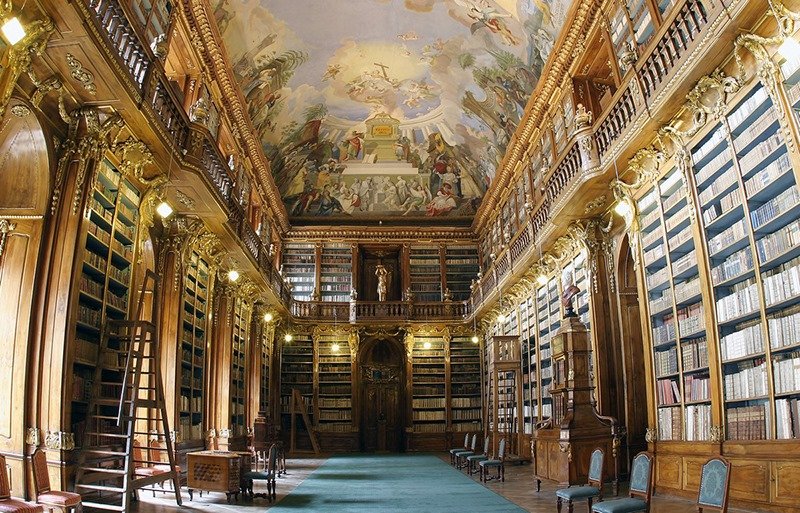 In the final quarter of the 18th century, Abbot Václav Mayer decided to build new library space for the numerous additions to the library. To this end, he had the current Philosophical Hall built on the site of a granary by Jan Ignác Palliardi, an Italian architect naturalized in Bohemia.

The amazing size of the hall (length: 32 m, width: 22 m, height: 14 m) is compounded by the monumental ceiling fresco by Viennese painter Anton Maulbertsch, painted over six months in 1794 with the help of just one assistant. The highest rows of books are only accessible from the gallery; hidden spiral staircases, masked with false book spines, lead up to the corners of the gallery.

The fresco ‘Intellectual Progress of Mankind’ is a concise depiction of developments in science and religion, their mutual impact on each other, and quests for knowledge from the oldest times until the time the hall was built. 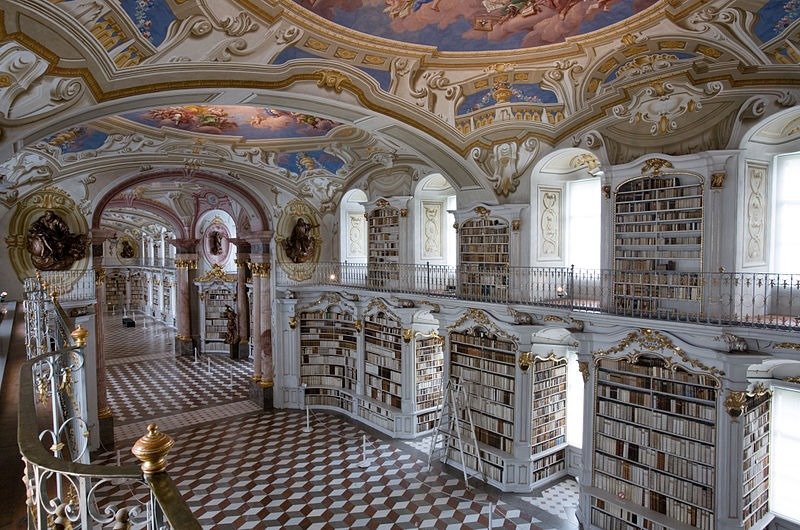 Admont Abbey is a Benedictine monastery located on the Enns River in the town of Admont, Austria. It is the oldest remaining monastery in Styria and contains the largest monastic library in the world. The abbey is known for its Baroque architecture, art, and manuscripts.

Adorning the ceilings are seven frescoes by Bartolomeo Altomonte who was 80-years-old at the time and completed the frescoes over the summer months of 1775 and 1776. The frescoes depict the steps in ‘man’s exploration of thinking and speaking from the sciences to Divine Revelation in the central cupola’.

Lastly, the library collection comprises some 200,000 volumes. The most valuable treasures are the more than 1,400 manuscripts (the earliest from the 8th century) and the 530 incunabula (early printed books before 1500). 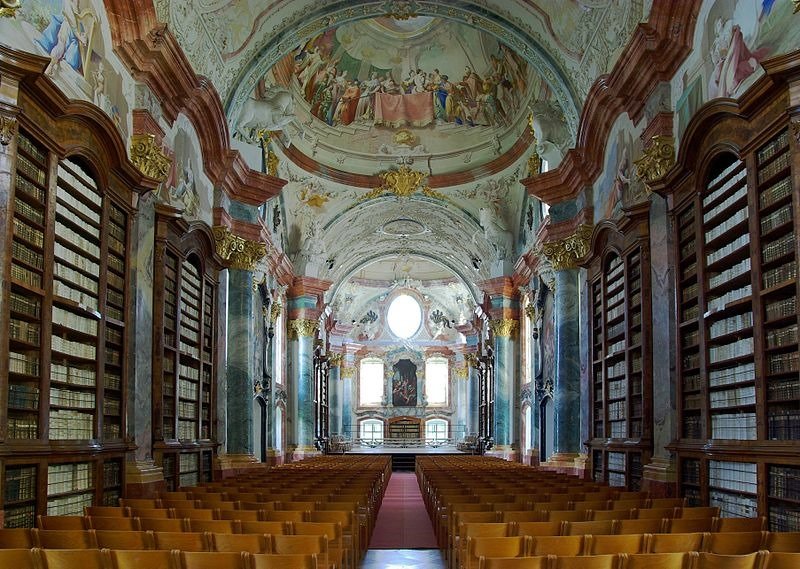 The imposing Altenburg Abbey Library in Austria, built in 1740, has a Baroque interior which rises up three floors. The vast domes, barrel-vaulted ceilings, red and blue marble columns, frescoes, statues and prancing horses make it difficult to spot the puny collection of books cowering below in just nine bookcases. 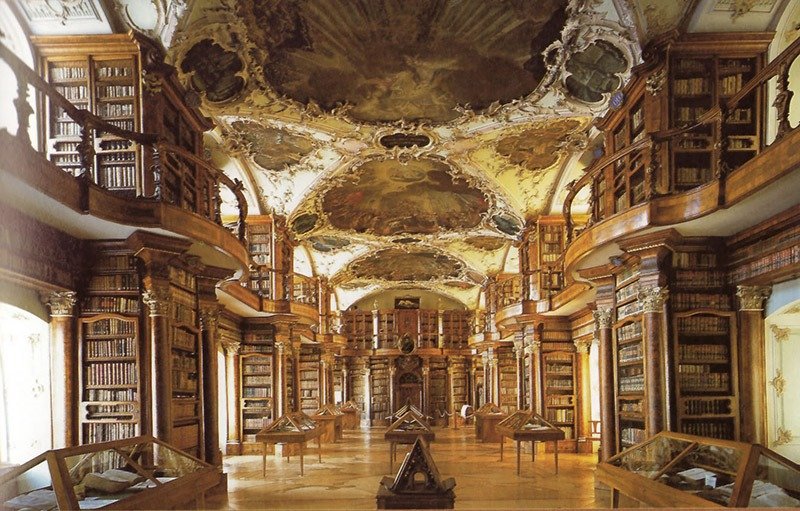 Above the entrance to St Gallen Abbey Library, one of the oldest of its kind, is a Greek inscription which translates into English as “pharmacy of the soul”.  The library was founded in 719 and is almost as ancient as the whole abbey site, which can trace it origins to a hermitage set up by Irish monk Gallus.

Only 30,000 of the library’s collection – books and manuscripts – can be seen. Some volumes are considered simply too precious to be shown in public, 400 of which are over 1000 years old, according to the deputy director Karl Schmuki. Ancient treasures include a Latin manuscript of the Gospel and the oldest book in German.

The library also contains the earliest known architectural drawn on parchment – of the abbey itself – a copy of which can be seen in the library. 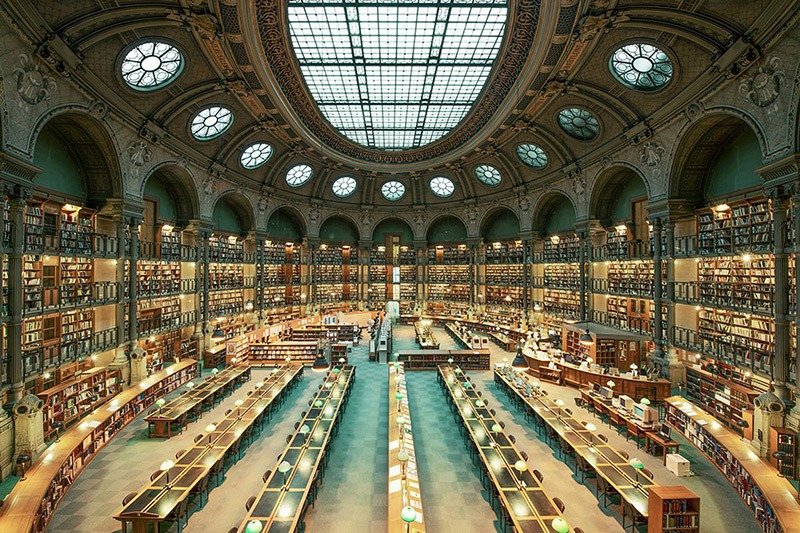 On 14 July 1988, President François Mitterrand announced the construction and the expansion of one of the largest and most modern libraries in the world, intended to cover all fields of knowledge, and designed to be accessible to all, using the most modern data transfer technologies, which could be consulted from a distance, and which would collaborate with other European libraries.

Construction of the library ran into huge cost overruns and technical difficulties related to its high-rise design, so much so that it was referred to as the “TGB” or “Très Grande Bibliothèque” (i.e. “Very Large Library,” a sarcastic allusion to France’s successful high-speed rail system, the TGV). After the move of the major collections from the rue de Richelieu, the National Library of France was inaugurated on 15 December 1996. It contains more than ten million volumes. 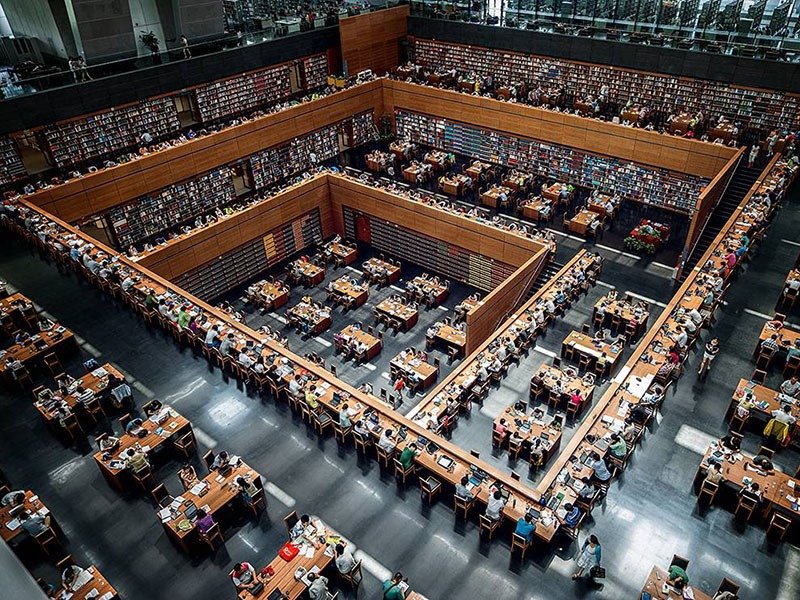 The NLC in Beijing is the largest library in Asia, and one of the largest in the world with a collection of over 26.3 million volumes of books by 2007.

It holds the largest and among the richest worldwide collections of Chinese literature and historical documents.

The library consists of the books and archives from imperial libraries dating to the Nan (Southern) Song dynasty (founded 1127). It also contains inscribed tortoise shells and bones, ancient manuscripts, and block-printed volumes, as well as books from the Qing dynasty, imperial colleges, and private collectors.