Kowloon Walled City was a densely populated, largely ungoverned settlement in Kowloon City, Hong Kong. Originally a Chinese military fort, the Walled City became an enclave after the New Territories were leased to Britain in 1898. Its population increased dramatically following the Japanese occupation of Hong Kong during World War II. It had a 1,920,000 residents per square kilometer. Once thought to be the most densely populated place on Earth, with 50,000 people crammed into only a few blocks, these fascinating pictures give a rare insight into the lives of those who lived Kowloon Walled City. 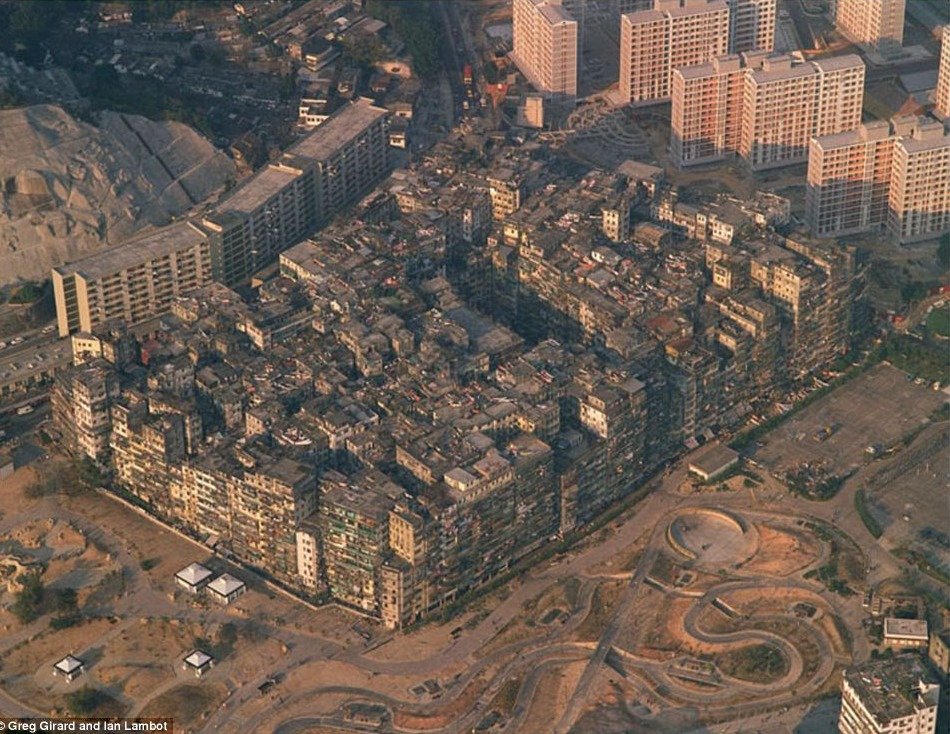 Kowloon Walled City was notorious for drugs and crime but many of its 50,000 residents lived their lives peacefully until it was demolished in the early 90s. 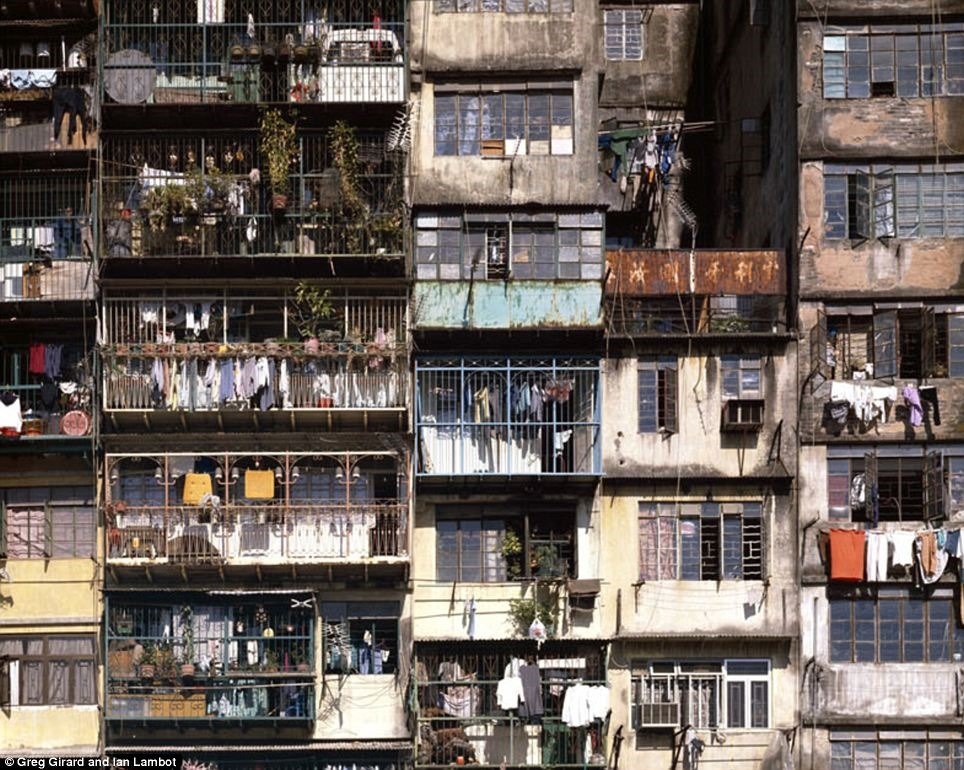 Canadian photographer Greg Girard and Ian Lambot spent five years getting to know the residents and taking pictures of the densely populated buildings. 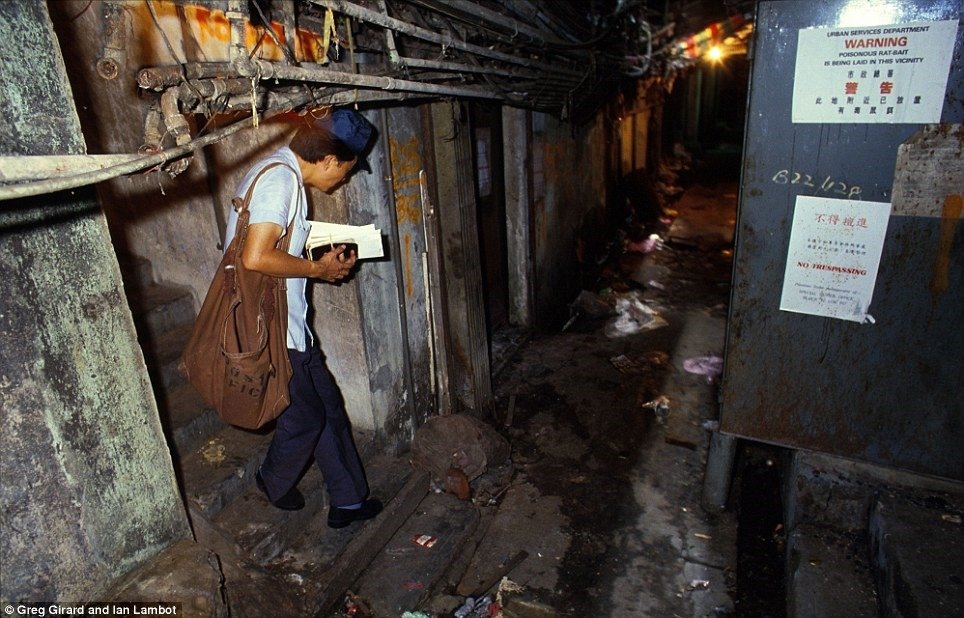 Mir Lui was assigned to work in the city as a postman in 1976 and had no choice but to go. He was one of the few people who knew the ins and outs and wore a hat to protect him from the constant dripping. 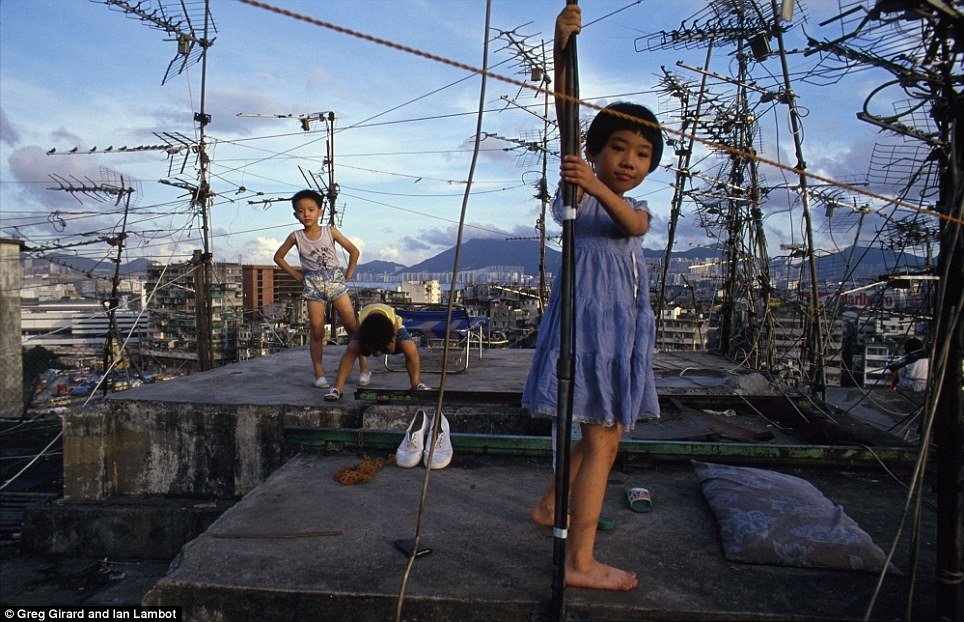 The shrieks of children playing on rooftops were frequently drowned out by the sounds of jet engines as aircraft powered through their final 100 meters on the runway at Kai Tak Airport. 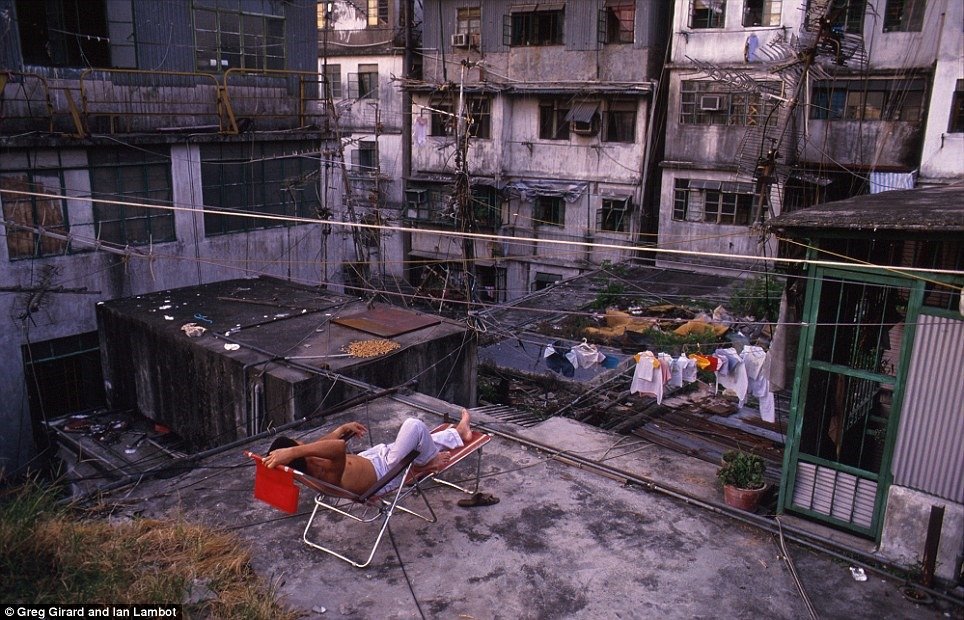 For many residents who lived in the upper levels of the city, ion in particular, the roof was an invaluable sanctuary: a ‘lung’ of fresh air and escape from the claustrophobia of the windowless flats below 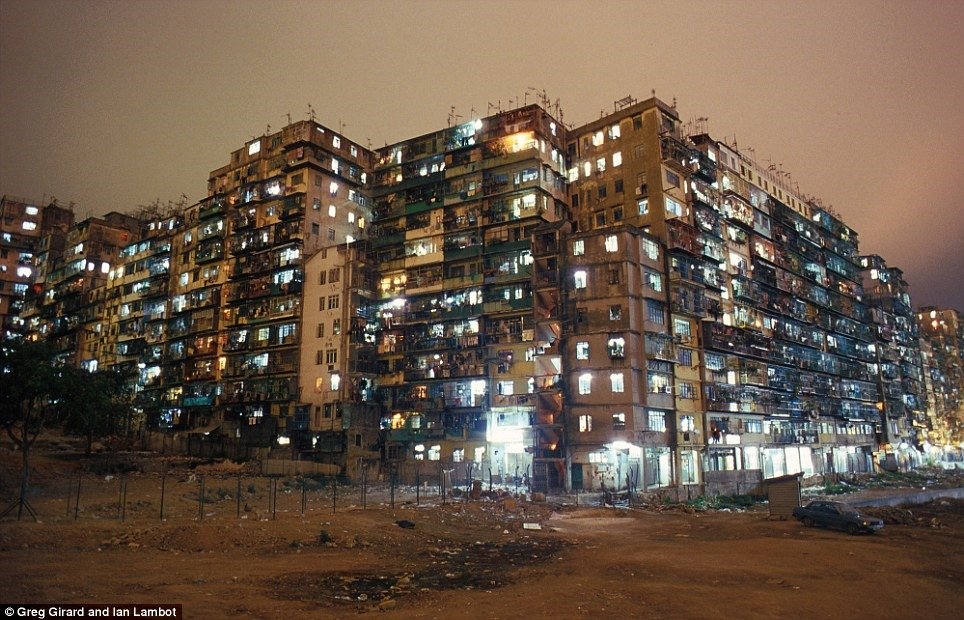 The city, lit up during the night, was the scene of the 1993 movie Crime Story starring Jackie Chan and includes real scenes of buildings exploding. 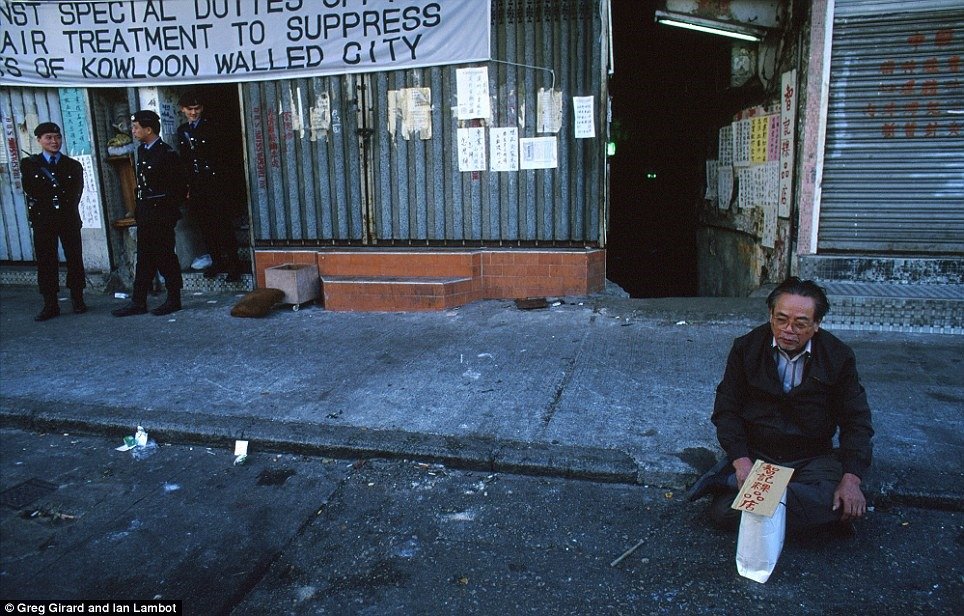 A Kowloon Walled City resident who is dissatisfied with compensation payouts from the government sits on a pavement in protest as police start the clearance operation. The Triads maintained such a grip that the Hong Kong police force could only enter in large groups for safety reasons. 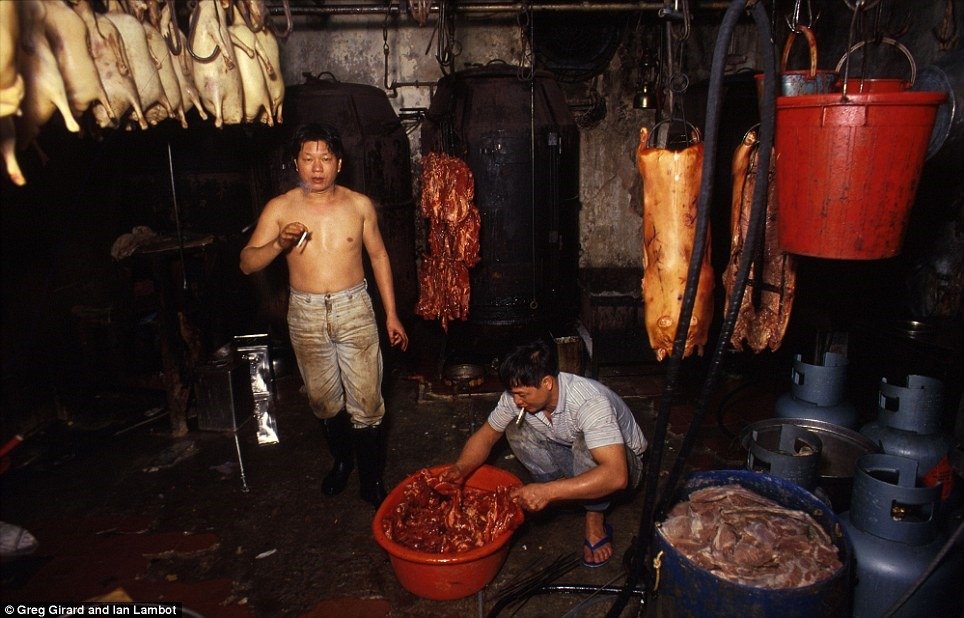 Food processors admitted they had moved into the city to benefit from the low rents and to seek refuge from the jurisdiction of government health and sanitation inspectors. 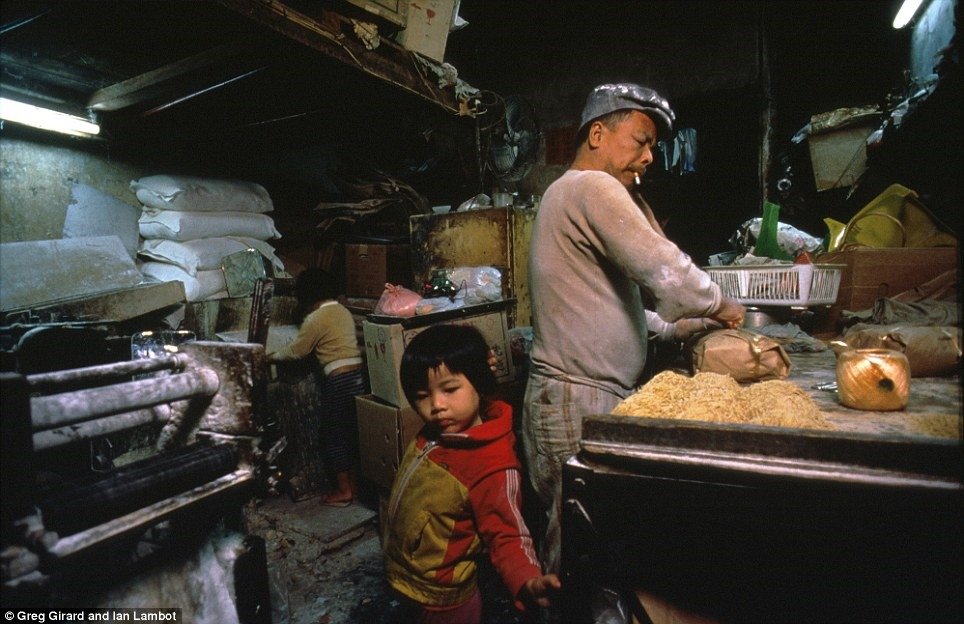 A workplace during the day would turn into a living room at night when Hui Tung Choy’s wife and two young daughters joined him at his noodle business. The children’s play and homework space was a flour-encrusted work bench. 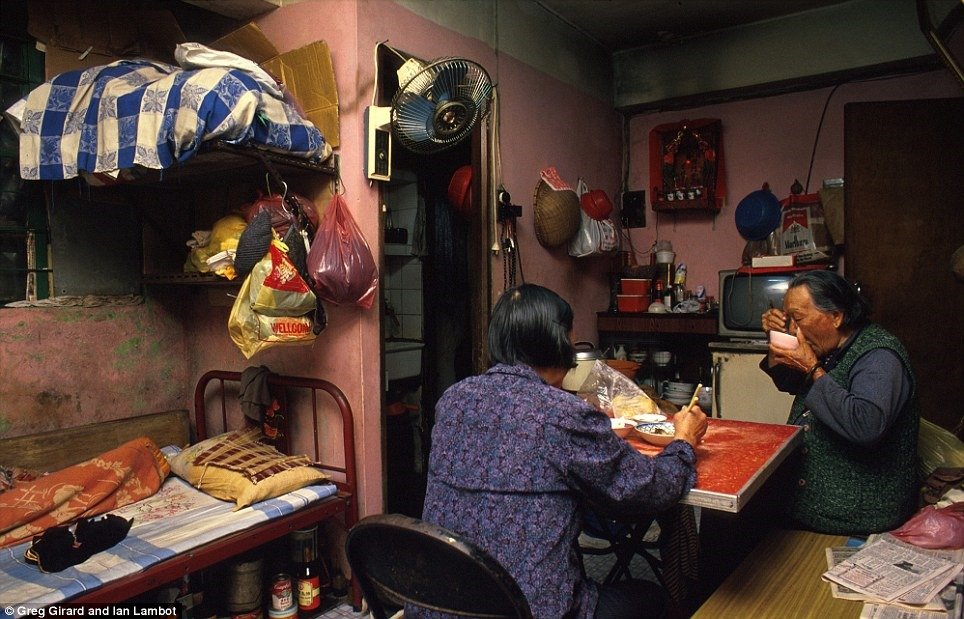 Law Yu Yi, aged 90, lived in a small and humid third-floor flat with her son’s 68-year-old wife off Lung Chun First Alley. The arrangement is typical of traditional Chinese values in which the daughter-in-law looks after her in-laws.