Here are 25 Facts You Didn’t Know About Pulp Fiction. 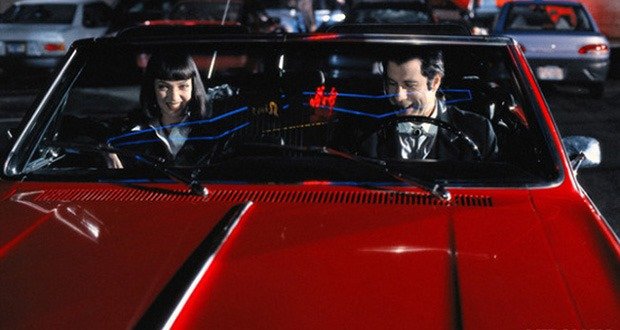 1. In real life, Vincent Vega’s 1964 Chevelle Malibu convertible belongs to Quentin Tarantino and was stolen during the production of the film. In 2013, a police officer saw two kids stripping an older car. He arrested them and when researching the vehicle found the VIN number had been altered. It turns out that it was the car stolen from Quentin Tarantino. The owner had recently purchased it and had no idea it was stolen.

2. At around 1 hour mark, to get the impact of Vincent (John Travolta) giving Mia (Uma Thurman) the adrenalin shot the scene was filmed with the hypodermic needle already in place, Vincent pulled the needle from her chest then the shot was reversed. Watch carefully and you’ll see a mark on Mia’s chest disappear when she’s revived.

3. Uma Thurman originally turned down the role of Mia Wallace. Quentin Tarantino was so desperate to have her as Mia, he ended up reading her the script over the phone, finally convincing her to take on the role.

4. The movie cost $8 million to make, $5 million of which went to pay the actors’ salaries.

5. The passage from the Bible that Jules (Samuel L. Jackson) has memorized was mostly made up by Quentin Tarantino and Samuel L. Jackson. The only part that’s similar to what the Bible says is the part where he says, “And I will strike down upon thee with great vengeance and furious anger. And you will know My name is the Lord when I lay My vengeance upon thee.” However, the parts about the righteous man and the shepherd are not real. 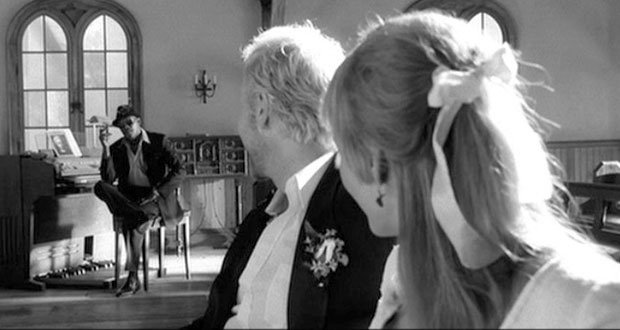 6. Towards the end of the film, Jules (Samuel L. Jackson) says he wants to retire and become a drifter. In Kill Bill: Vol. 2 (2004), Samuel L. Jackson turns up as Rufus, a piano playing drifter.

7. In an interview with James Lipton on Inside the Actors Studio (1994), John Travolta went into details of the many obstacles of tackling his role as Vincent Vega. The most challenging being that of how he was going to show the essence of his character as that of a heroin addict. Never using the drug himself, director Quentin Tarantino had Travolta research his character’s addiction by speaking to a recovering heroin addict that he (Quentin) knew personally. Travolta asked Tarantino’s friend to tell him how he could know what it felt like to be on heroin (without actually using it of course). Tarantino’s friend explained “If you want to get the ‘bottom envelope’ feeling of that, get plastered on Tequila, and lie down in a hot pool. Then you will have barely touched the feeling of what it might be like to be on heroin.” John Travolta then explained that he was ecstatic to tell his wife that he was “told” in order to research aspects of his upcoming roles’ character, he had to get plastered on Tequila and lie in a hot pool. He stated she happily joined him at the hotel hot tub which had shots of Tequila lined from end to end on the railings to assist him in his “research”.

10. Jules’ “Bad Mother Fu**er” wallet actually belongs to Quentin Tarantino. The inscription on the wallet is a reference to the theme song of Shaft (1971). Samuel L. Jackson, who plays Jules, would later go on to play Shaft in the 2000 reboot, Shaft (2000). 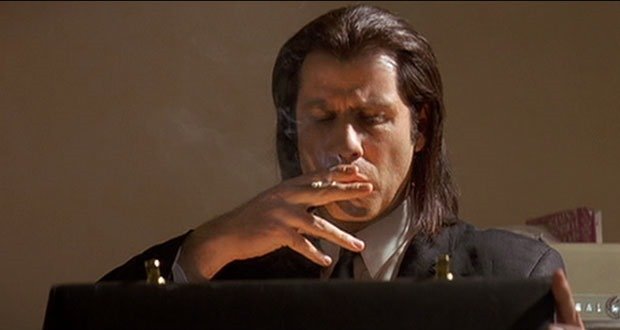 11. Speculation abounds as to the nature of the mysterious glowing contents of the case (which Tarantino said was simply a MacGuffin plot device):

13. At around 55 minute mark, when Vincent calls Lance on his cell phone, Lance is eating a bowl of Fruit Brute, a cereal from the older monster cereal family. Fruit Brute (which, along with Yummy Mummy, Frankenberry, Boo Berry, and Count Chocula, make up the monster cereals) was later discontinued, along with “Yummy Mummy.” Quentin Tarantino has held onto a box and drops it into scenes from time to time. It appeared in Reservoir Dogs (1992), too.

14. Marsellus (Ving Rhames) and Mia (Uma Thurman) never actually speak to one another on-screen, even though they are seen together poolside and are husband and wife.

15. At around 48 minute mark, the dance that Vince (John Travolta) and Mia (Uma Thurman) perform at Jack Rabbit Slims was copied, movement by movement, from the dance performed early in Fellini’s 1963 classic 8½ (1963) by Gloria Morin (Barbara Steele) and Mario Mezzabotta (Mario Pisu). 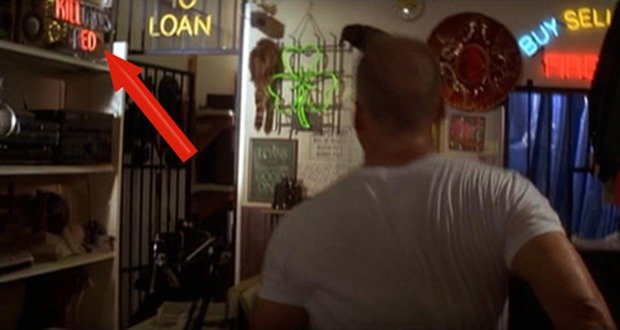 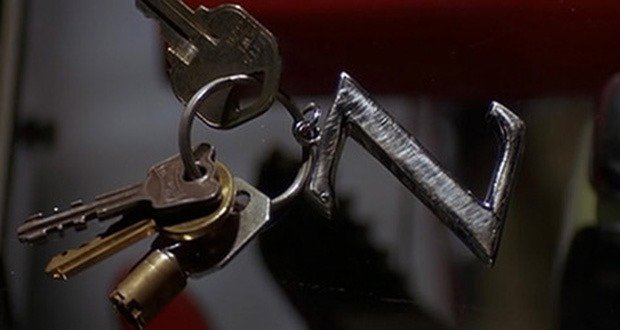 16. A “KILLIANS RED” neon sign at the pawn shop is partially lit. It reads: “KILL ED”. Seconds before you see Butch (Bruce Willis) pick up Zed’s keys there is a “Z” on the key chain. Put it all together and you have “KILL ZED.”

17. At around 55 minute mark, the movie that Lance (Eric Stoltz) is watching when Vincent (John Travolta) arrives with overdosed Mia is The Three Stooges short, Brideless Groom (1947). Quentin Tarantino is an avid Three Stooges fan, but couldn’t get the rights from Comedy III to show them in the movie. So while a Three Stooges film appears on screen (“Brideless Groom” is public domain), the Three Stooges themselves do not. Emil Sitka, the frequent Three Stooges co-star who does appear on screen, is credited as “Hold hands you lovebirds.”

18. The T-shirt that Jimmy gives to Vincent after they get hosed down bears the logo for the UC Santa Cruz Banana Slugs. This is not a joke; the banana slug is really the official mascot of UCSC.

19. There is a persistent myth that all the clocks in the movie are set to 4:20 (although, certainly all the clocks on the wall in the pawn shop are set to 4:20). However, in at least two scenes it is obvious that this is not the case. In the “Bonnie Situation” while Jimmy, Vince and Jules are drinking coffee in the kitchen, the clock clearly reads 8:15. Secondly, when Vince and Jules go to retrieve the briefcase, it is “7:22 in the a.m.”

20. At around 25 minute mark, in the script, the character of Paul the bartender (played by Paul Calderon) is referred to as “English Bob” (Jules even refers to English Bob, saying “Yeah, [Winston Wolf] is about as European as f**king English Bob”), but his line “My name’s Paul, and this is between y’all” apparently stuck, as he is credited as ‘Paul’ in the credits. 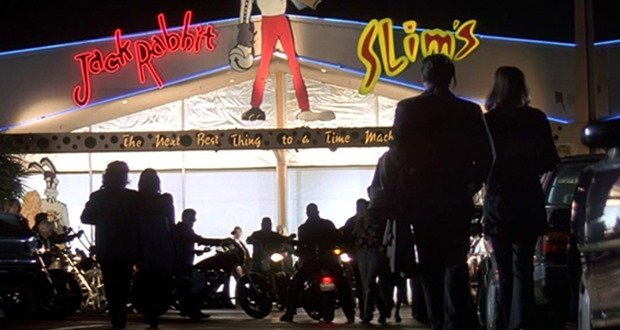 21. Jack Rabbit Slims is not a real diner. In fact, it wasn’t even shot in a restaurant, but in a giant warehouse set. The idea, was supposedly based on either architect John Lautnerís diners or Ed Debevicís fifties-themed diner near Beverly Hills.

22. The restaurant scene was filmed at the Hawthorne Grill (originally Holly’s) located at 13763 Hawthorne Blvd., Hawthorne, CA. The building was demolished soon after filming.

23. On the wall of the Pawn Shop, there is a license plate bearing ‘SW 4913’. This is no coincidence but rather Quentin Tarantino paying homage to the Smith & Wesson 4913 pistol.

24. When Butch is passing by the first of two houses when he is heading toward his old apartment to retrieve his watch, you can hear the advertisement for a five dollar shake at “Jack Rabbit Slims” through one of the windows. This alludes to an earlier part of the movie when Mia gets a five dollar shake while accompanied by Vincent at “Jack Rabbit Slims.”

25. The lines from Pumpkin and Honey Bunny “All right, everybody be cool, this is a robbery! Any of you f**king pricks move, and I’ll execute every motherfucking last one of ya!” are used in the song “Scooby Snacks” by the Fun Lovin’ Criminals.