Here are 25 Interesting Facts About Harry Potter and the Prisoner of Azkaban. 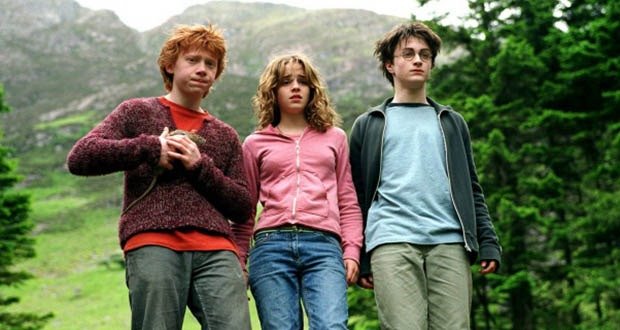 1. In order to acquaint himself with his three lead actors, director Alfonso Cuarón had each of them write an essay about their characters, from a first-person point of view. Emma Watson, in true Hermione fashion, went a little overboard and wrote a 16-page essay. Daniel Radcliffe wrote a simple one-page summary, and Rupert Grint never even turned his in.

2. Originally the script called for Hermione to slap Malfoy as opposed to punching him. During rehearsal for the scene Tom Felton told Emma Watson to slap him, however he had intended for her to not actually hit him, and thus was taken by surprise when Emma smacked him across the face as hard as she could. Emma said she felt terrible about it afterwards and didn’t know what she was thinking.

3. Despite his initial reluctance to accept the role of Albus Dumbledore, Richard Harris, who portrayed Dumbledore in the first two films, was determined to portray the character through the entire series. However, following the filming of Harry Potter and the Chamber of Secrets (2002) Harris was diagnosed with Hodgekin’s lymphoma. During post-production on that film, producer David Heyman went to visit Richard Harris in the hospital. Though he was very weak from his illness, Harris insisted that the role of Dumbledore not be recast. Sadly, Harris passed away shortly before production was to begin on Prisoner of Azkaban, necessitating a recast.

4. Ian McKellen turned down the role of Dumbledore. Having appeared as Gandalf in The Lord of the Rings, he said, “I had enough trouble living up to one legend. Two would be too much to hope for.” He also stated it would have been inappropriate to take Richard Harris’ role, as the late actor had called McKellen a “dreadful” actor.

5. To make the Knight Bus appear as if it was zipping through traffic at an extremely high speed, the scenes were filmed with the bus driving at normal speed and the rest of the traffic driving at snail’s pace. The film was advanced though the camera at a slower rate than it would eventually advance on screen. When the scene was played back at normal speed, the bus appears to be driving super-fast. 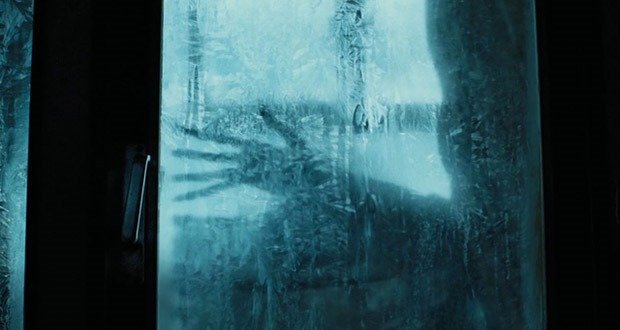 6. Director Alfonso Cuarón had the idea that when the dementors approached the Hogwarts Express the rain would turn to ice. However, due to his thick Mexican accent the visual effects team misheard “ice” as “eyes”. They went as far as to draft a storyboard which depicted eyes falling from the sky, which they presented to a stunned Cuarón, who instantly corrected their mistake.

7. J.K. Rowling based the dementors on her battle with depression.

8. Alfonso Cuarón had the idea to have Harry, Ron, and Hermione wear everyday clothes more often than their Hogwarts uniforms in order to show more of the characters’ personalities. He also gave the rest of the Hogwarts students permission to wear their uniforms any way they wanted to in order to bring a greater sense of realism to the wizards’ school, hence why some of the students wear the uniforms very neatly while others have the shirts and ties hanging out.

9. Harry Melling had lost so much weight that the role of Dudley Dursley was almost recast. Eventually it was decided that Melling would continue to play Dudley and would wear a fat suit to make him look heavier.

10. During the filming of the sleeping bag scene, director Alfonso Cuarón, Michael Gambon, and Alan Rickman played a practical joke on Daniel Radcliffe (who had requested to have his sleeping bag next to a girl whom he liked at the time) by hiding a remote-control-operated Whoopee Cushion in his sleeping bag. According to Cuarón, Daniel tried really hard to stay in character while everyone else was laughing. 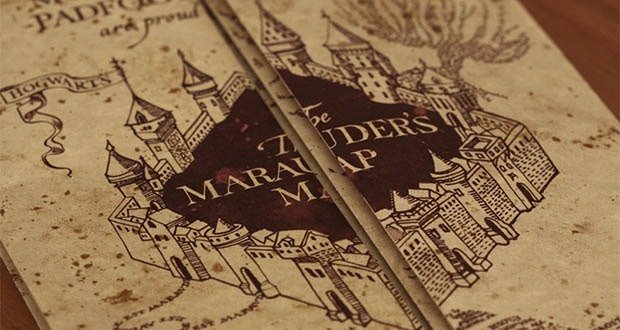 11. When designing the Marauder’s Map, graphic designers decided to stray from the traditional rolled-up treasure map with burned edges, and designed it instead as a folding map with many layers, each representing a different level of Hogwarts Castle. The shapes of the various areas and objects depicted on the map are defined with written words as opposed to draftsman’s lines. The map was printed on white paper and subsequently “aged” using a rich blend of coffee in order to give the appearance of old parchment.

12. The bats seen flying around in Hagrid’s hut are real. They were particularly challenging to train, and Daniel Radcliffe noted that they tended to urinate everywhere. The animal trainers kept the bats under control using food-rewards; they especially enjoyed banana.

13. The symbols under Sirius Black’s picture on the Wanted Poster translate as “more or less human.”

14. Warner Brothers supplied ushers at cinemas with night vision goggles to prevent illegal recording and pirating of the film.

15. Ron’s fear of spiders was explained by author J.K. Rowling as stemming from an early trauma, when his practical joker brothers, Fred and George, tormented him with spiders during his infancy. 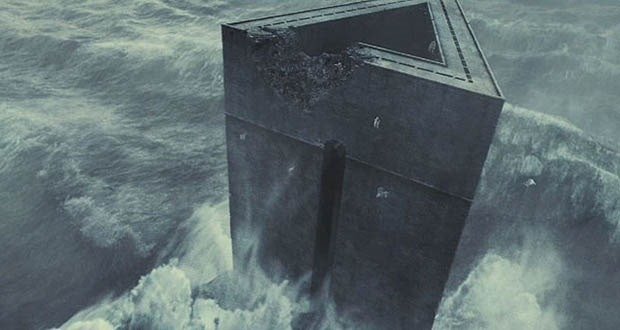 16. Azkaban Prison, though mentioned, never actually appears in the film. Nonetheless, concept art was created by both conceptual artist Andrew Williamson and production designer Stuart Craig. Both sketches depict Azkaban as a triangular stone fortress built on the edge of a giant waterfall. When Azkaban is seen for the first time in Harry Potter and the Order of the Phoenix (2007) the filmmakers looked to these sketches and ultimately decided to keep the triangular design but relocated the prison to an island in the middle of the ocean (closer to how it was described in the book).

17. Not only may Professor Remus Lupin’s last name possibly refer to a wolf (“lupus” being the species name of the wolf), but his first name does as well. In Roman mythology, Romulus and Remus were the founders of Rome and were both raised by a female wolf. (In actuality, Lupin is a type of flower, and Remus actually translates to “swift”.)

19. When we see the Marauder’s Map for the first time, the name ‘Newt Scamander’ can be seen. In the Harry Potter universe, he wrote the book “Fantastic Beasts and Where To Find Them”, but isn’t a teacher at Hogwarts.

20. Early in the film, Harry sees a newspaper article with a photograph of the Weasley family in Egypt. Though it is never again mentioned, this is a very important plot point in the book. While on an inspection of Azkaban the Minister of Magic had a copy of that paper, and gave it to Sirius Black who recognized Peter Pettigrew disguised as Scabbers. This is what made him decide to break out of Azkaban, track down Scabbers at Hogwarts, and take his revenge by killing him. 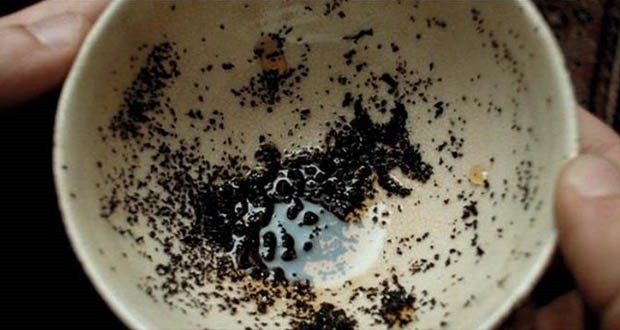 21. Sirius’, the brightest star in the night sky, is also known as The Dog Star. This foreshadows the fact that Sirius is The Grim, the dog seen throughout the film.

22. Although the Marauders’ Map, created by Messrs Moony, Padfoot, Prongs, and Wormtail plays a large part in the film, the identities of the first three are not made clear. This is surprising as this was important to understanding this plot in the book. Moony was Lupin, who was supported by his three friends. These learned “Animagus” shape shifting techniques to sympathize with him. James Potter was Prongs the Stag (a trait passed on to the Patronus of his son Harry), Sirius Black was Padfoot the Dog, and Peter Pettigrew was, more obviously, Wormtail the Rat.

23. In the scene where Harry sees Peter Pettigrew’s name on the map, but does not actually see him in the hallway, the sound of a rat scurrying about is faintly audible.

24. Professor Dumbledore seemingly stalls the executioner by saying that he needs to sign the execution order, and that he has “a very long name”. In Harry Potter and the Order of the Phoenix (2007), his full name is revealed to be Albus Percival Wulfric Brian Dumbledore.

25. Ron’s dream about spiders making him tap-dance is a two-in-one reference of the next book. In ‘Goblet of Fire’ there is an unforgivable curse where you can control what someone does, taught by Professor Moody. He makes a spider tap-dance on the desk.