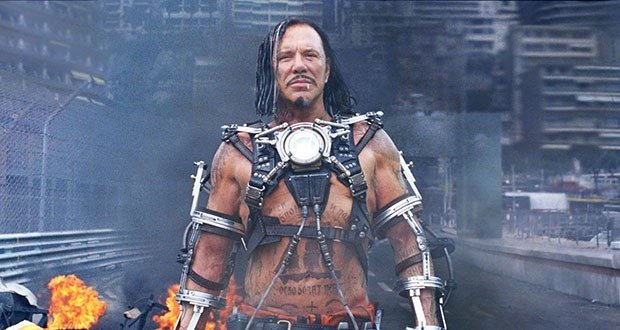 1. Not being tech literate, Mickey Rourke found the most challenging part about playing Whiplash was pretending to know his way around a computer.

2. A lot of Whiplash’s identifying features were suggested by Mickey Rourke himself. He wanted to perform half of his role in Russian, and consulted on the character’s tattoos and gold teeth as well as having a pet cockatoo. In fact, Rourke paid for the bird and the gold teeth out of his own pocket.

3. Although Mickey Rourke spent several months on treadmill and weight training, he initially was still unable to move around and use the whip prop in the Whiplash outfit test due to its sheer weight. To get around this problem, Rourke would wear heavy vests in subsequent physical training sessions to accustom his body in moving while wearing heavy armor.

5. The year in which Anton Vanko is said to have defected to the US, 1963, is actually the year in which Vanko first appeared in the comics (as the Crimson Dynamo) and defected. 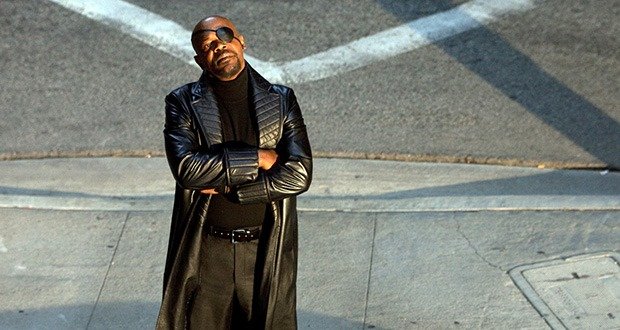 6. Samuel L. Jackson was promised that Nick Fury would be given more screen time by director Jon Favreau. Jackson almost didn’t return to play Fury, due to problems with contract negotiations, but secured a landmark nine-picture deal to play Nick Fury not only in this film but in forthcoming Marvel Studio productions.

7. Numerous news clippings shown in the film show Tony Stark and Ivan Vanko when they were younger men. Most of these are actual photos of Robert Downey Jr. and Mickey Rourke, both of whom came to fame in the 1980s.

8. To prepare for his role as Ivan Vanko/Whiplash, Mickey Rourke paid a visit to Butyrka Prison, Moscow: “I tried to incorporate the whole Russian philosophy. It’s a culture of its own and I really enjoyed doing the research and meeting the people and they were very gracious there at the prison.” Rourke also commented that Vanko’s dialogue is in a Slovakian accent.

9. Jon Favreau had a lot of friction with the Marvel higher-ups due to their constant intervention, to the point that they were having him rewrite the script as the film was still shooting. In particular, elements such as the increased prominence of the SHIELD subplot were the result of a need to establish the greater Marvel Cinematic Universe in preparation for Avengers Assemble (2012), at the expense of the coherence of the film’s own plot. These disputes got so bad that Favreau turned down directing Iron Man 3 (2013).

10. According to Jon Favreau, the technology in this film was portrayed as more futuristic: “After the first film (Iron Man (2008)), a number of tech companies talked about how uncanny a lot of our depictions of technology had turned out to be, and how many different films and videogames ended up being inspired by the imagery we used. This forced us to go a bit further into the future and try and change the nature of this technology; if we’d just duplicated what happened in the first one we would be behind the curve. So now we’re dealing with holograms, the interface within the suit and the suit being upgraded too.” 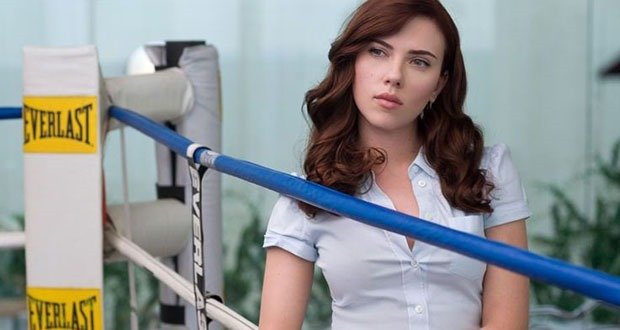 11. When Tony Stark asks Natalie Rushman if she actually speaks Latin, she responds with the phrase “Fallaces sunt rerum species,” a quote from Lucio Anneo Seneca meaning “The appearances of things are deceptive.”

12. While filming the fight scene in Monaco, Mickey Rourke couldn’t get the hang of the whips so they played Gnarls Barkley’s “Crazy” loudly for him to get the rhythm.

13. Tony Stark refers to the suitcase armor as “the football,” a reference to the briefcase with nuclear launch codes that accompanies U.S. President.

14. The layout and many of the buildings of “Stark Expo 1974” were based on the 1964-65 New York Worlds Fair. In the Expo promo film outtakes shown in the movie, young Tony Stark picks up the Bell System Pavilion. 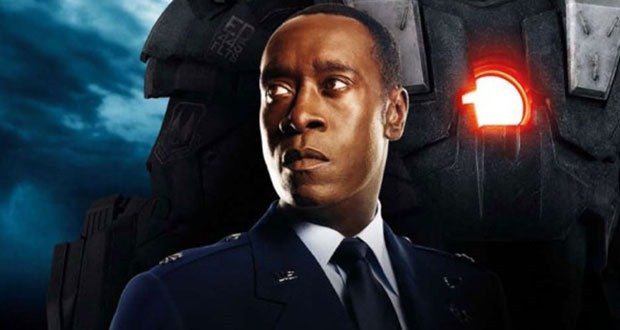 16. Terrence Howard was replaced with Don Cheadle in the part of Rhodes for no perceived reason. The actor claimed that his contract wasn’t honored. Entertainment Weekly stated that Jon Favreau did not enjoy working with him, often re-shooting or cutting his scenes. There was also speculation that Marvel had gone to Howard, asking him to accept a pay-cut for appearing in the sequel. As Howard had been the first actor cast for Iron Man (2008), he was paid the most.

17. As Justin Hammer is introducing each group of Hammer Drones, the anthem of each respective branch of the military plays in the background: The U.S. Army’s “The Army Goes Rolling Along (The Caisson Song),” the U.S. Navy’s “Anchors Aweigh,” the U.S. Air Force’s “The U.S. Air Force (Into the Wild Blue Yonder),” and the U.S. Marine Corps’s “Marines’ Hymn.”

18. Howard Stark’s (John Slattery) presentation of his idea for a futuristic city is heavily influenced by Walt Disney’s television revelation of his new EPCOT Center and the accompanying Florida Project. The 3D map of the city closely mimics that of EPCOT’s, and the posters behind Stark are from World’s Fairs in which Disney had a great influence, like Stark may also have been. In addition, one of the very few real-life 1964 World’s Fair buildings included in the Stark Expo is a replica of the General Electric pavilion, which famously featured Disney’s Carousel of Progress. Richard M. Sherman contributed the song “Make Way for Tomorrow Today” to the movie, a song similar to “There’s a Great Big Beautiful Tomorrow,” which Richard and his brother Robert B. Sherman composed for the Carousel of Progress, among many other classic Disney tunes.

19. This film has cameos for two actors that will star in future movies based on Marvel Comic characters. Kate Mara plays a U.S. Marshall that serves Tony Stark with papers. She went on to star as Susan Storm in the 2015 reboot of the Fantastic Four. Also making a cameo is Olivia Munn, who plays the TV show presenter at the Stark Expo. Olivia is starring as Psylocke in X-Men Apocalypse.

20. The map locations on the monitors in the Shield headquarters at the end of the film correspond to characters and event from the Marvel Comic books. The location in Africa is a reference to Black Panther. Other locations refer to Thor, Captain America, Hulk, and others. 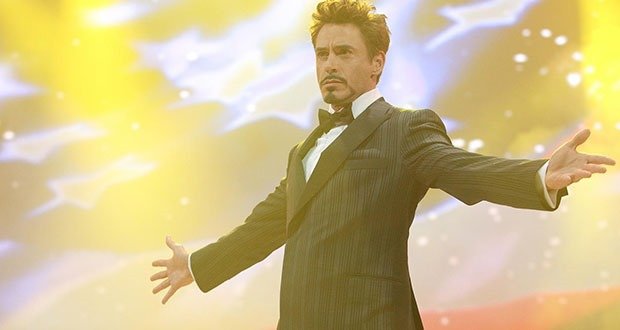 21. Tony Stark creates a new arc reactor with an item that resembles Captain America’s shield. This shield was earlier seen lying on a desk at Stark’s office in Iron Man (2008). This is an easter egg to reference Captain America who was a founding member of The Avengers along with Iron Man in the films (although Captain America didn’t appear in the Avengers comics until issue three, when they found him frozen). In the movie, Nick Fury refers to something called “The Avenger Initiative.” Contrary to popular theory, it is not actually the shield of Captain America.

22. The new element Stark creates comes from the Zeeman effect (a magnetic field) and the Stark effect (static electric fields).

23. When brainstorming the location for scene when Nick Fury meets a hungover Tony Stark eating donuts, Jon Favreau wanted something that was distinctly Los Angeles as Stark is the first onscreen Marvel superhero on the west coast. Favreau was figuring out where a character like Stark would visit after being hungover from partying all night and figured Randy’s Donuts, the 24 hour L.A. donut shop with the giant landmark donut on top was perfect. Favreau was relieved that Stark wasn’t going to be on a giant sign belonging to a national chain restaurant. When meeting with the shop owner, who liked the idea, the owner initially suggested Stark fly through the donut.

24. Curiously, every instance of the word “Russian” was made inaudible in the Chinese version. No explanation was given for why, although theories abound in the comments ranging from China thinking viewers would be distressed by a Russian villain, trying lend a courtesy to their longtime ally nation, or instead trying to distance themselves from Russia by obscuring all mention of it.

25. The Navy Hammer drones are marked “VX-23.” VX-23 is a US Navy Aircraft Test Squadron out of Naval Air Station Patuxent River that conducts research, testing, and evaluation of fixed wing tactical aircraft and UAVs.

AskReaders: What is the creepiest thing that has happened to you? – Part 4