1-5 Facts About The Force Awakens 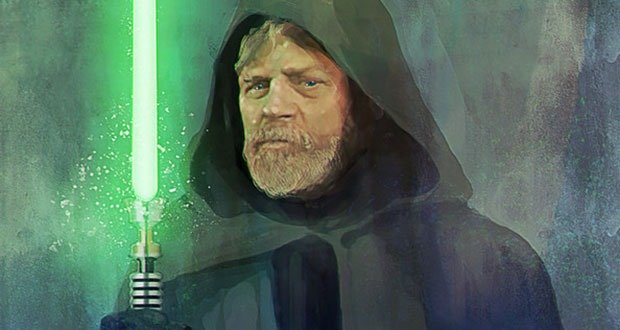 1. Mark Hamill claimed George Lucas nonchalantly told him over lunch a new Star Wars trilogy was going to be made by Disney, and if he did not want to be involved, Luke Skywalker would simply be written out of the script. However, Hamill immediately agreed to reprise the role. Hamill admitted, however, that he pretended to also be nonchalant about it so it didn’t seem like he was excited for the role.

2. In a real-life parallel to the film Fanboys (2009), Mark Hamill and John Boyega successfully lobbied director J.J. Abrams to allow Star Wars fan Daniel Fleetwood to see the film before official release, as Fleetwood had been diagnosed with terminal cancer, and was not expected to live to see the film’s actual release date. Fleetwood was shown the film at a screening in his home, after Disney agreed. Fleetwood died on 10 November, 2015.

3. This is the first J.J. Abrams film not to have a musical score by Michael Giacchino. Aptly enough, Giacchino stated in an interview that he would rather hear the music of John Williams in a new Star Wars film than his own. Giacchino’s name shows up in episode VII’s credits as a stormtrooper.

4. When the first trailer was released, there was much discussion about how it appeared to be getting back to the “grubbiness” (“dirty transporters, second-hand rockets, things that broke”) of Episode IV, rather than the CGI cleanliness of Episodes I-III. British TV star Phill Jupitus revealed in an interview that he “met an effects bloke in Essex, he drinks in my local coffee shop. He said [the makers of the new film] bought every gas-bottled air gun in England when they arrived because they wanted the Stormtroopers’ guns to have a kick when they fired them. You don’t have to fake it; it looks real.”

5. While filming in summer 2014, Harrison Ford broke his ankle on the door of the Millennium Falcon. About a year later, J.J. Abrams revealed that he broke his back while trying to help get Ford out from under the door.

6-10 Facts About The Force Awakens 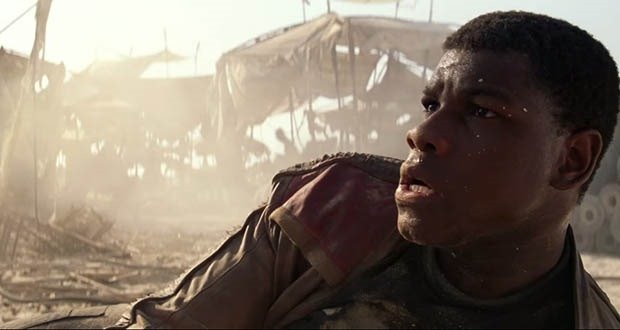 6. John Boyega was so nervous and frightened at the prospect of not getting the role that he didn’t tell his parents that he had been cast until after a cast photo was posted online by the official Star Wars twitter page.

7. When he was interviewed about “Star Wars: Episode VI – Return of the Jedi (1983)” on TV-AM in the UK in 1983, Mark Hamill (Luke Skywalker) stated that George Lucas had considered bringing Mark Hamill back as Luke Skywalker as an Obi-wan Kenobi-like character passing Excalibur onto the next generation in Episode VII and that Episode VII would not be until 2011.

8. Kevin Smith and Benedict Cumberbatch visited the set. Smith, infamous for his open and talkative nature, was forced to sign a non-disclosure agreement, and J.J. Abrams had World War 2 style propaganda posters titled “Loose Lips Sink Starships” hung up around the set as a reminder to Smith not to reveal spoilers for the film to the public. True to his word, the only tidbit Smith revealed about his visit was that he cried when he stood on the Millennium Falcon set, as it reminded him of how much he loved Star Wars as a child.

9. X-Wing Blue Squadron makes its debut in The Force Awakens. In the original Star Wars: Episode IV – A New Hope (1977), Luke Skywalker was originally supposed to fly with Blue Squadron, but the blue markings on the star fighters proved difficult to film against blue screens, so it was changed to Red Squadron.

10. In summer 2013, it was revealed both Carrie Fisher and Mark Hamill had begun a vigorous regimen of diet, exercise and stunt training to prepare for their roles of Leia and Luke, respectively.

11-15 Facts About The Force Awakens 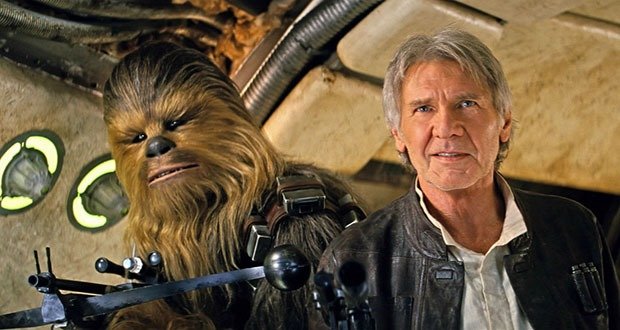 11. At one point, Han Solo refers to many of the iconic vocabulary from the Star Wars mythos as “mumbo-jumbo.” This is the very same word the late Sir Alec Guinness so (in)famously used in interviews, when complaining about the dialogue he had been given for his role in the first Star Wars film.

12. J.J. Abrams always wanted General Hux to be played by a young actor. He wanted the character to have a sense of tragedy and the fact that he appears to be too young to be in charge of a murderous group added to that. According to Abrams, the character’s name was created after he noticed an old, abandoned grave site with the name Hux engraved on the stone.

13. The symbols on the flags hanging outside Maz Kanata’s castle include Boba Fett’s Mythosaur skull, Ziro the Hutt’s Black Sun tattoo and Hondo Ohnaka’s pirate symbol. There is also the symbol of the 501st Legion on one of the flags. The 501st is an international fan-based organization dedicated to the construction and wearing of screen-accurate replicas of Imperial Stormtrooper armor, Sith Lords, Clone Troopers, bounty hunters, and other villains from the Star Wars universe. The 501st Legion also refers to an in-canon Clone War regiment that gained the name “Vader’s Fist”, as they were utilized by Darth Vader when he turned on the Jedi Order, during the first years of the Empire.

14. Because of the secretive nature surrounding the film, several cast members found out that they had gotten parts in the film with very short notice. Domhnall Gleeson found out the day after he auditioned which was only one day before the table read. Oscar Isaac found out only several hours before the table read and was instructed to wait in a London hotel room to receive a call telling him whether he was to go downstairs and into a waiting car that would take him to the table read or book a flight back to the United States.

15. The first Star Wars film to not have Kenny Baker cast as R2-D2. He is however credited as R2-D2 Consultant.

16-20 Facts About The Force Awakens 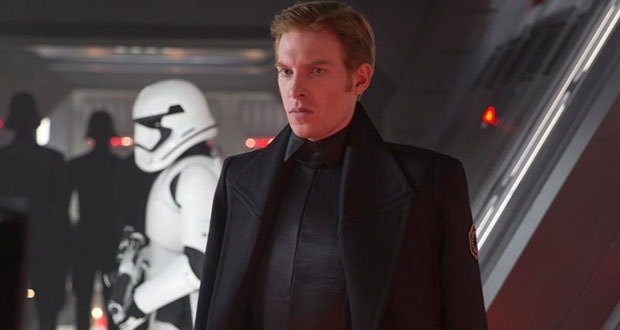 16. The uniform worn by General Hux (Domhnall Gleeson) is modeled after the uniforms worn by Nazis mixed with some naval influences.

18. George Lucas, while maintaining that he was at peace relinquishing his material, admitted to having mixed feelings before seeing the film, likening the experience to attending an ex-wife’s wedding.

19. The film had a budget of $200 million which was the highest of a Star Wars film upon release.

20. Although this is the second Star Wars film to be released in IMAX, it is the first to have IMAX cameras in use during filming.

21-25 Facts About The Force Awakens 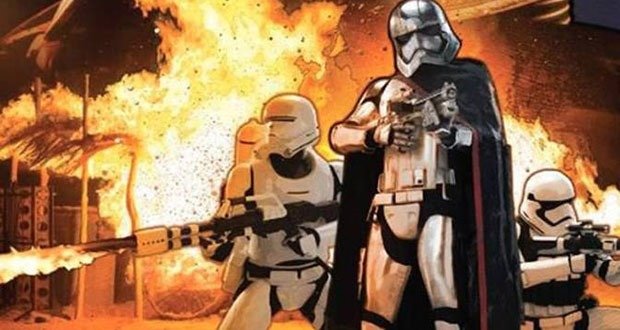 21. Stormtroopers are seen using flamethrowers for the first time in this film – this method explains the state Luke finds his home in during A New Hope.

22. The Millennium Falcon has a rectangular antenna in The Force Awakens. That’s because it lost its original antenna in the Battle of Endor in ‘Return of the Jedi’.

23. This sequel trilogy of Star Wars (Episodes : VII, VIII and IX) will introduce a new canon time line in Star Wars’ saga with a new Expanded Universe called “New Universe”, with new stories in the books, comics, games, etc. The former Expanded Universe is still recognized from Lucasfilm but it was moved from the original canonical events in an “alternative time line” known with the name “Legend Universe.” The official Star Wars’ time line is now composed of: Prequel trilogy (Episodes: I, II, III), Star Wars: The Clone Wars (2008), Star Wars Rebels (2014), Original trilogy (Episodes: IV, V, VI), and Sequel trilogy (Episodes: VII, VIII, IX). EA’s Star Wars: Battlefront (2015) is not officially canon, as it features gameplay in which characters can appear as Darth Vader as well as Luke Skywalker in his fully black outfit from Return of the Jedi (1983), on Hoth, neither of which truly happen in the canon timeline. Although Darth Vader did appear on Hoth in Episode V

24. The new version of the X-Wing includes an element that Ralph McQuarrie and Joe Johnston originally designed for Star Wars: Episode IV – A New Hope (1977) but was never used . Specifically the circular engines that split into two half circles. The classic trilogy design had two cylinders on each side. A new aspect that has been added for The Force Awakens is that the wings themselves split vertically as well as horizontally, with the front of the wing pushing down and the back half up.

25. The Millennium Falcon chess game that Finn accidentally triggers picks up right where the chess game between R2 and Chewie left off in Star Wars: Episode IV – A New Hope (1977).

AskReaders: What’s the most ridiculous thing you've bullshi**ed someone into believing?

Advice: How to shake yourself out when your brain goes into spiral of negativity