We had a great response to historical photos segment. After finishing 20-parts of that segment, we have decided to halt it for a while, and start some other new segment. One such one is Space Images segment. So here is part 1 and stay tuned for more. 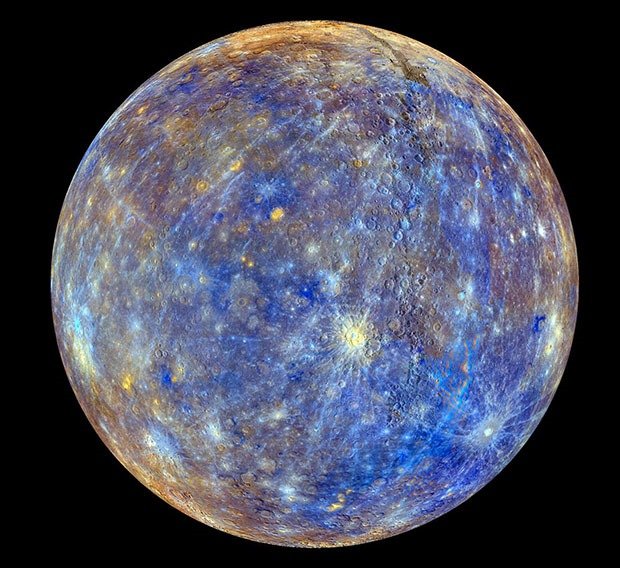 Clearest picture of Mercury. In real life, mercury isn’t this blue. Filter was added to the original picture to show rock and mineral make-up. On that note, here is a picture of what Mercury looks like in its real color. On a space craft you can get the most resolution per weight of your camera from a black and white image. True color imagery is pretty, but not terribly useful scientifically, which is why you see so many false color space images. They are using different wave lengths of light to observe different things. 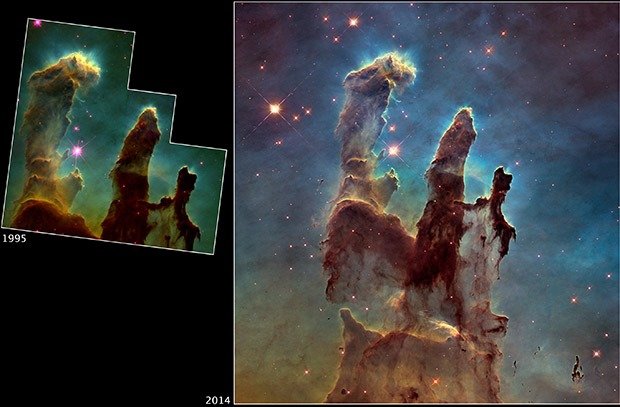 Hubble Revisits the Famous “Pillars of Creation” with a new lens. Images taken with the Spitzer Space Telescope uncovered a cloud of hot dust in the vicinity of the Pillars of Creation that one group interpreted to be a shock wave produced by a supernova. The appearance of the cloud suggests a supernova would have destroyed these Pillars of Creation 6000 years ago. Given the distance of roughly 7000 light years to the Pillars of Creation, this would mean that they have actually already been destroyed, but because of the finite speed of light, this destruction is not yet visible on Earth, but should be visible in about 1000 years. However, this interpretation of the hot dust has been disputed by an astronomer uninvolved in the Spitzer observations, who argues that a supernova should have resulted in stronger radio and x-ray radiation than has been observed, and that winds from massive stars could instead have heated the dust. If this is the case, the Pillars of Creation will undergo a more gradual erosion. 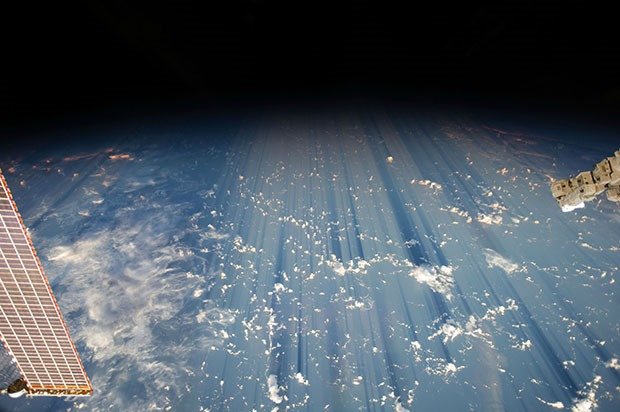 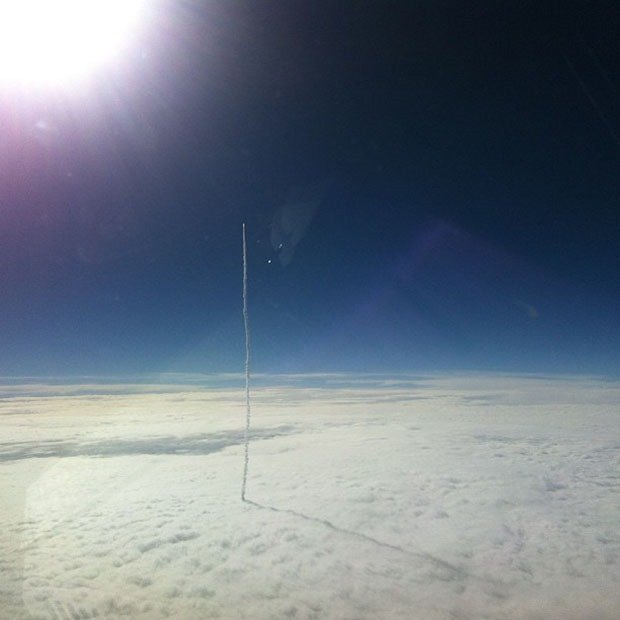 A rocket leaving Earth’s atmosphere. I like how big our rockets are in person, but how small and insignificant looking they are when compared to the planet and space. 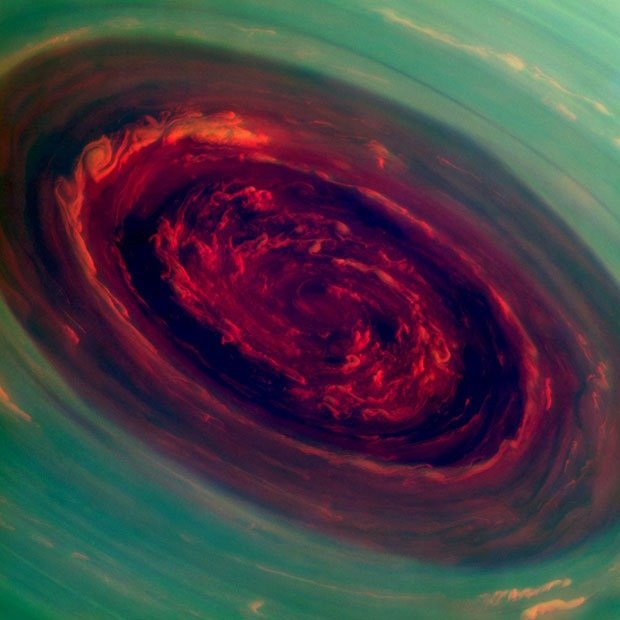 Saturn’s North Pole Storm. Absolutely Mesmerizing. The inner storm is about 2000 km across. The outer hexagon wall is 13,800 km, which is more than the diameter of Earth. 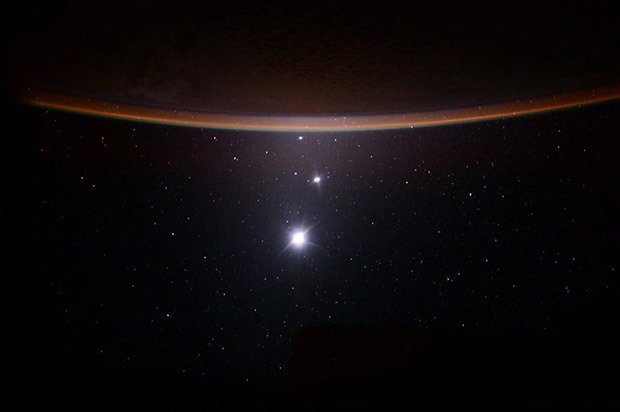 Astronaut Scott Kelly captures a Earth/Moon/Venus/Jupiter alignment from the ISS. 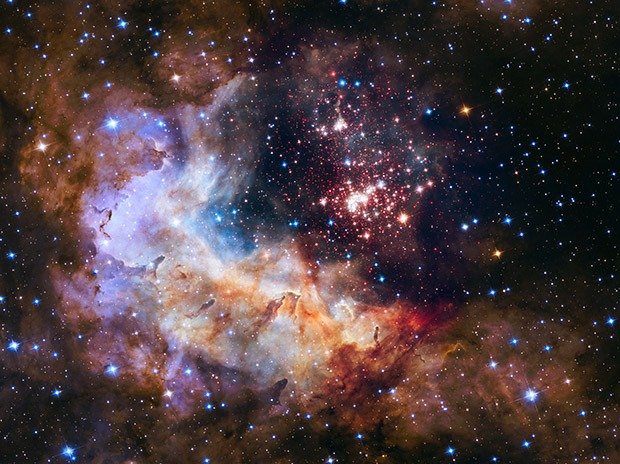 Hubble’s 25th anniversary image.  There is a bit of science behind this prettiness, I actually have a colleague studying the star cluster in this picture, which is called Westerlund 2 (after an astronomer named Westerlund who cataloged it). It’s about 20,000 light years from us in another spiral arm of the Milky Way, at a more-or-less similar distance from the center. The reason these stars are really interesting to astronomers is they are super young, as one might guess from being right next to the nebula, like only a million or two years old young. That’s nothing for stars like our sun that live billions of years, these guys are babies! Except these stars are particularly hot and bright ones- mainly O stars, the biggest kind of stars, which only live 5-6 million years. So if you’re an O star, you’re through a decent fraction of your lifetime already, and will explode in a firey supernova at the end of that life.

So I always say O stars are the true rock stars of the universe: live fast, shine bright, and die young. Anyway…

So the reason my colleague studies this cluster is it has some of the most massive stars we know of in it- there’s a pair of supermassive stars in a binary (which is awesome because then you can measure the star’s masses- luckily for reasons we don’t know most supermassive stars form in binaries) and one of those clocked in at 80 solar masses (80 times the mass of our sun). That is insane. For perspective, anything over 15 solar masses is already an O star, so we’re talking about a star that is maybe one of a hundred in a galaxy of 100 billion stars. It has a super strong stellar wind though, so was likely much bigger when it formed, and will be maybe “only” 50 solar masses when it dies. 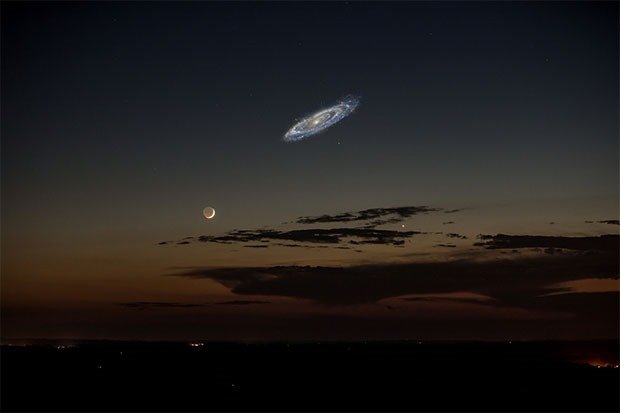 Andromeda’s actual size if it was brighter. Most versions of this size comparison paste the moon (rather poorly) onto an existing picture of the galaxy. But I couldn’t find any the other way round, where the galaxy is pasted onto an existing picture of the moon. I think you get a much more realistic sense of what’s ‘hidden’ in our night sky like this.

The measurement for how large objects appear to us in the sky is apparent diameter (or angular diameter or apparent size). It’s measured in degrees, minutes and seconds. Horizon to horizon is 180º.

The Andromeda Galaxy is 3º across and 1º high from where we stand on Earth. The moon is 30′ or 0.5° so that galaxy is about 6 times bigger than the moon from where we stand. For comparison the sun is about 30′ (which is why total solar eclipses work the way they do).

We measure brightness in magnitude. The (full) moon is -12, Andromeda Galaxy is 3.5. This is a logarithmic scale (each whole step down is twice as bright) so the Andromeda Galaxy is much dimmer than the moon. For comparison: the sun is -26, Venus reaches -4.9, Jupiter -1.6.

Andromeda Galaxy is about 2.5 million light years away so it seems dimmer and smaller to us than the moon which is 1.2 light seconds away. 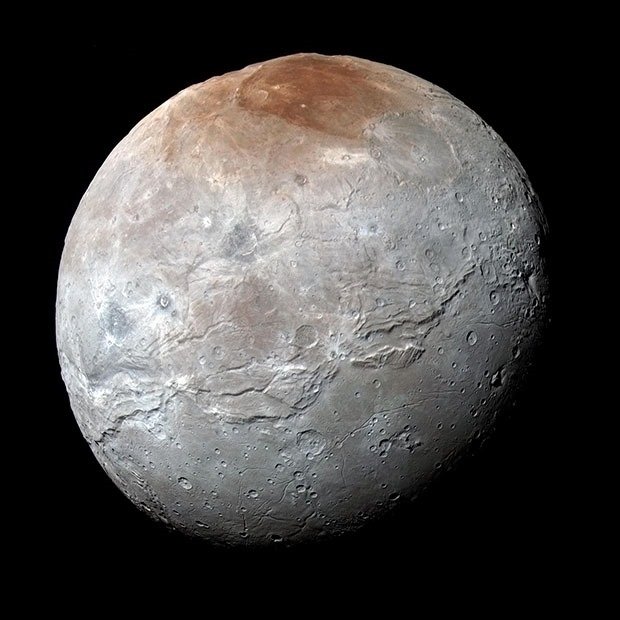 Pluto’s moon, Charon, at highest resolution yet and in color. Here’s some stuff we know about Charon from this image: 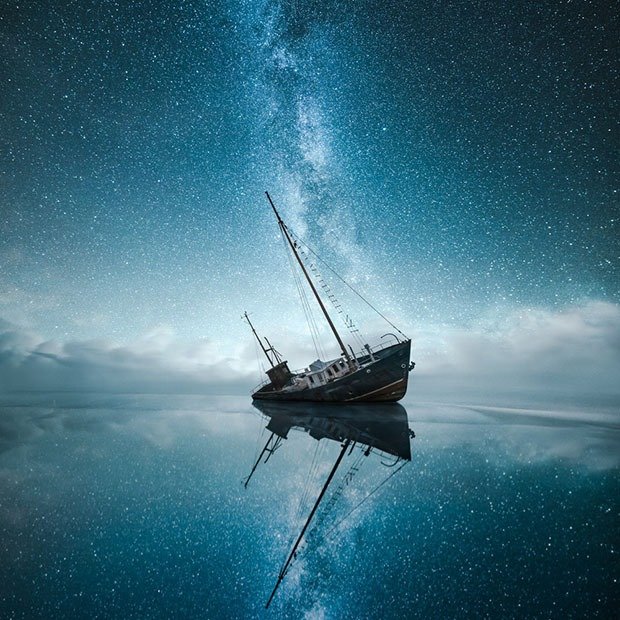 A Shipwreck under the Milky Way. Photographed by Mikko Lagerstedt 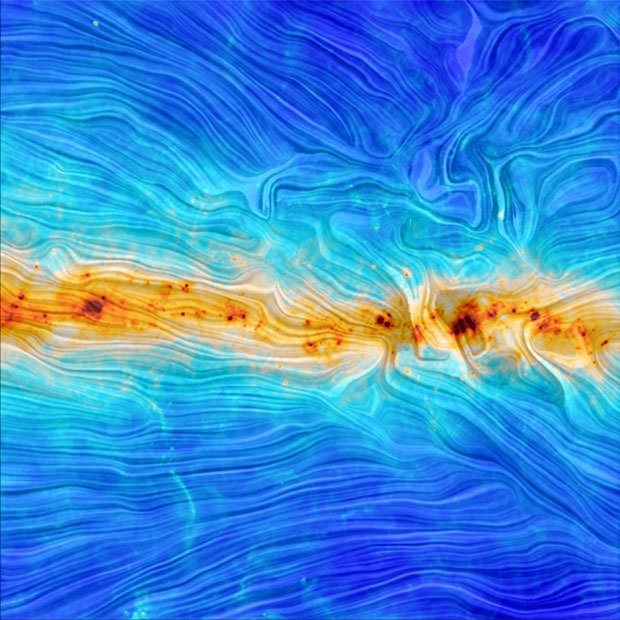 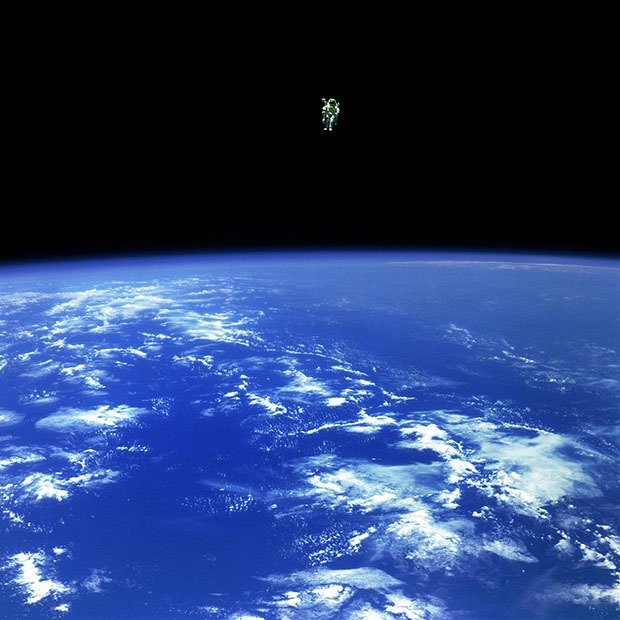 Bruce McCandless on the first ever untethered spacewalk, February 7, 1984. He said doing this walk was the most he ever trusted the laws of physics, that he wouldn’t start falling to Earth. It wasn’t as peaceful as he hoped because there were 3 different people talking in his ear the whole time. 1. Reminding him of the basic instructions. 2. Reading his vitals. 3. Another astronaut asking when it was going to be his turn to go. The whole experiment was done with the idea that the shuttle astronauts can go and repair satellites in orbit, without having to capture them. The plan was abandoned after Challenger happened.

Auto Advice: Inconsequential Things Drivers Do That Damage their Cars