What makes a weapon powerful? The word powerful can be very subjective in this case. Causing massive annihilation is powerful but so is inciting fear in a prolonged and painful manner. Anything that can destroy lives and properties is powerful, conversely anything that can protect lives and properties from these 25 most powerful weapons in history is also equally powerful. There is no stopping any country or institution from proving to the world how powerful they can be whether by destroying their enemy or protecting their own. 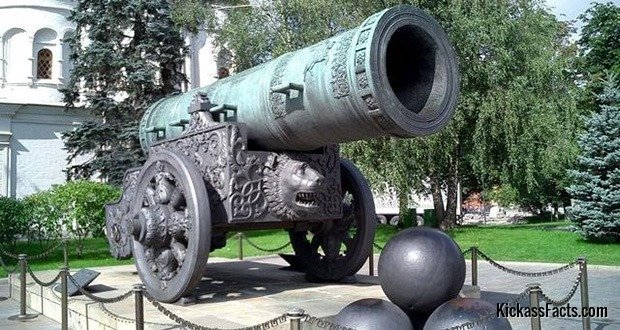 This engraved cannon is the largest howitzer ever made. It weighs 38 tons and is 5.34 meters long. Built in 1586, this massive weapon is now being displayed at the Kremlin in Moscow Russia. 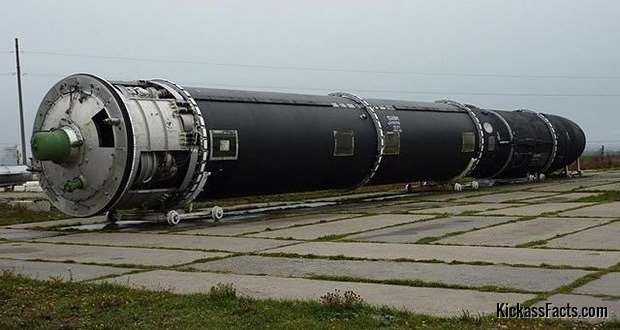 The difference between the previous entry and this Russian missile are the number of warheads that it can carry and the fact that it is normally launched from dry land. With its massive payload this ICBM wouldn’t have much trouble initiating a nuclear holocaust. 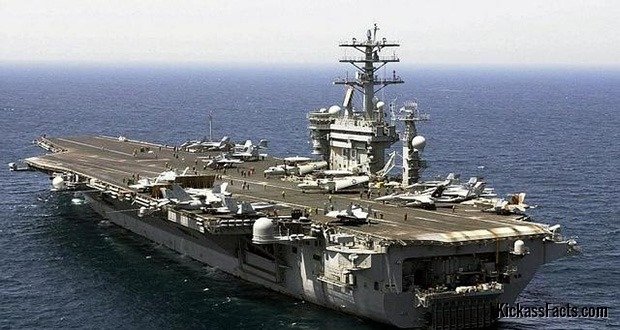 With twin nuclear reactors that don’t need refueling for 23 years and bays that are capable of holding up to 130 F/A-18 Hornets just the appearance of this carrier in any region is enough to influence global politics. 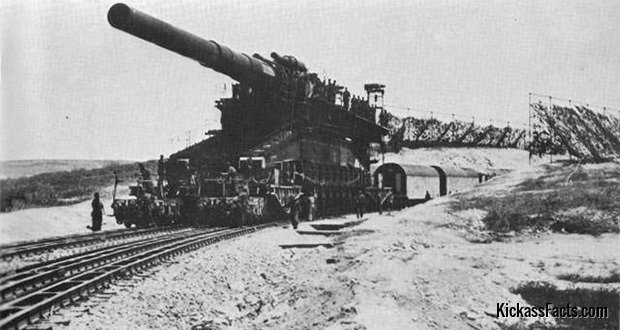 These two humongous World War II era German 80 cm railway siege guns are the largest caliber rifled weapons in history used in live combat and its shells are the heaviest of any ammunition ever. 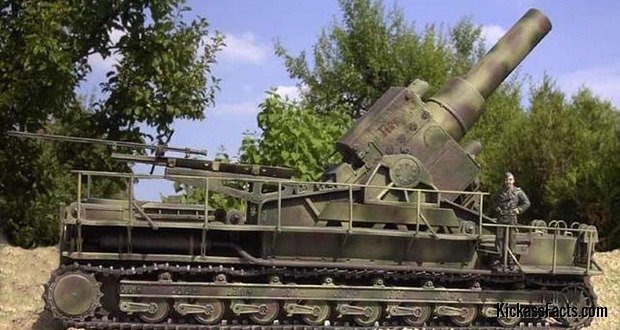 This mean machine created by Rheinmetall for the Nazi war machine was the largest self-propelled weapon to be used in actual attacks during World War II. 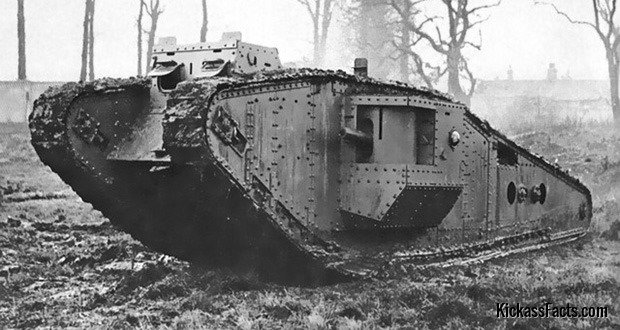 The first war vehicle to be called a tank could carry 5 machine guns and 8 soldiers. Mark I had several upgrades numbered II to X but all bore the same resemblance to their “Mother”. This massive tank and its variants were used by several countries throughout the First World War.

7. The Predator and Predator B (aka The Reaper) 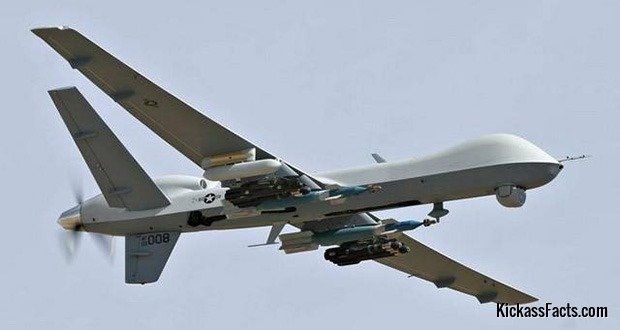 Used by the United States, the Royal Air Force, and the Italian Air Force, these drones are becoming increasingly common for both combat and recon operations. 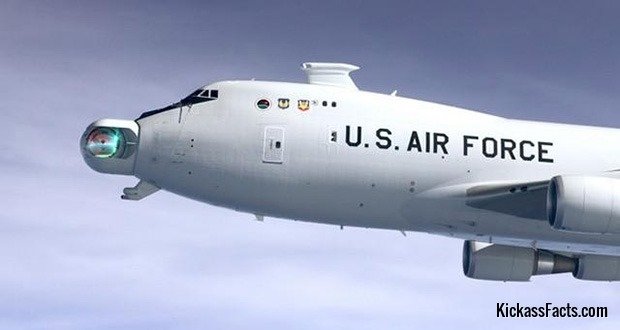 The Boeing YAL-1 Airborne Laser Testbed, (formerly Airborne Laser) weapons system is a megawatt-class chemical oxygen iodine laser (COIL) mounted inside a modified Boeing 747-400F. It is primarily designed as a missile defense system to destroy tactical ballistic missiles (TBMs) but funding for the program was cut in 2010. 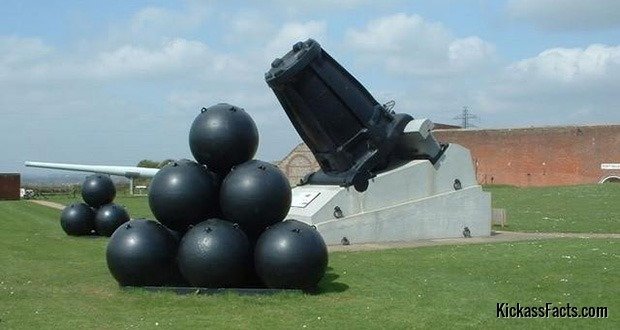 The world’s largest cannon ever has a caliber of 975 mm. Created by Joseph Paixhans, this monster weapon staked its notoriety during the Siege of Antwerp in 1832. 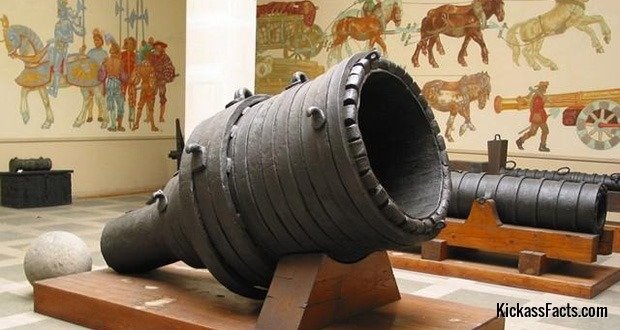 With a ball diameter of 80 cm, this super gun was the largest weapon used in 15th century Austria. Heeresgeschichtliches Museum at Vienna houses this monstrous bombard today. 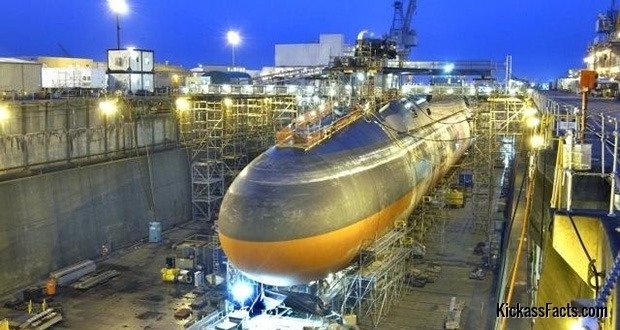 Launched from a submarine, this missile contains eight thermonuclear warheads. That’s bad news for anybody even remotely near the target. 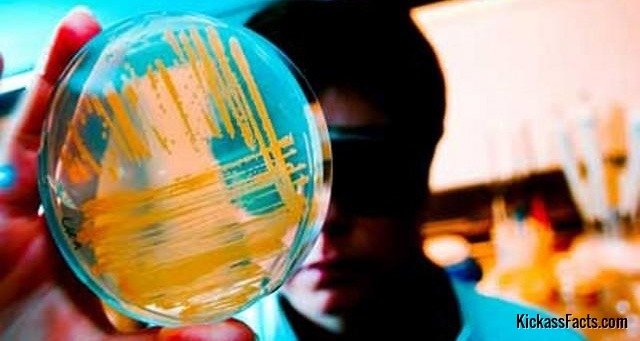 As we just said, being able to destroy an entire city in less than a second with the push of a button is one way to measure destructive power, but being able to selectively and slowly decimate a population with disease and infection is so unconventionally brutal that it has to top the list. 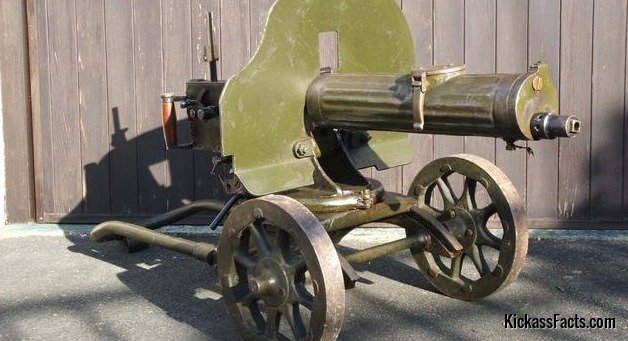 A self powered machine gun that could fire 600 rounds per minute which is equivalent to the firepower of 30 contemporary bolt action rifles. It has mostly been associated with British conquests and was famously used when 700 British soldiers fought off 3,000 warriors with just four Maxim guns in the Battle of Shangani. 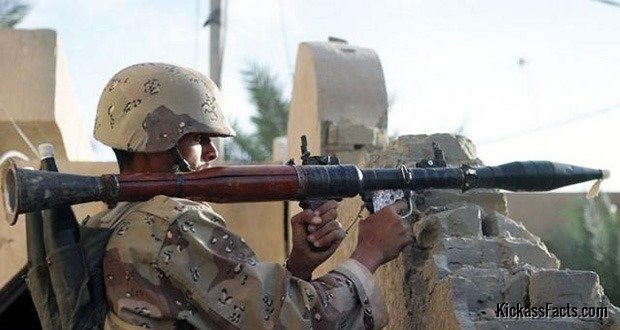 The Ruchnoy Protivotankovyy Granatomyot or hand-held anti-tank grenade launcher or simply the RPG is the most widely used anti-armor weapon in the world. Used by both militaries and insurgent groups, RPG’s even the battlefield out against opponents with more heavy artillery. 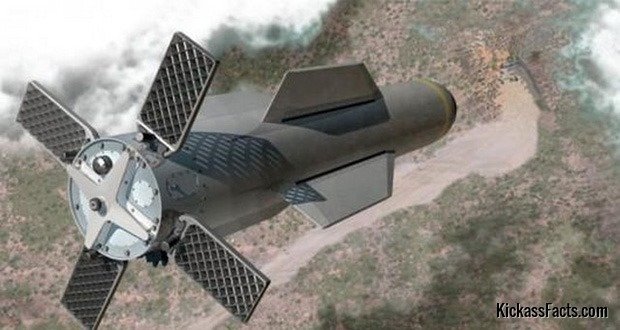 Nicknamed “Father of All Bombs” (FOAB), this is a Russian-made air-delivered/land-activated thermobaric weapon. In describing the bomb’s destructive power, Russian deputy chief of the general staff Alexander Rukshin was quoted as saying, “all that is alive merely evaporates.” 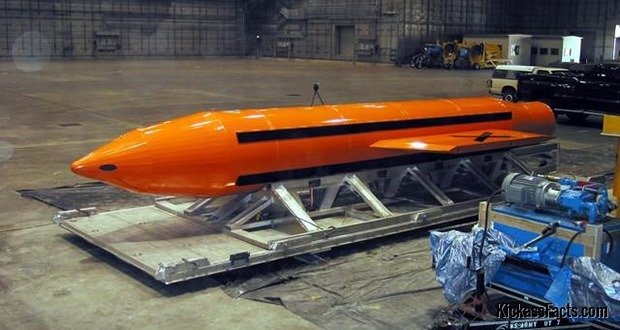 During the time of its development, the Mother of all Bombs or the officially named GBU-43/B Massice Ordinance was considered the most powerful non-nuclear weapon ever designed. Tested on March 11, 2003, its blast can destroy 9 city blocks with a radius of 137.61 m. A larger version of 13 tons was reportedly developed. 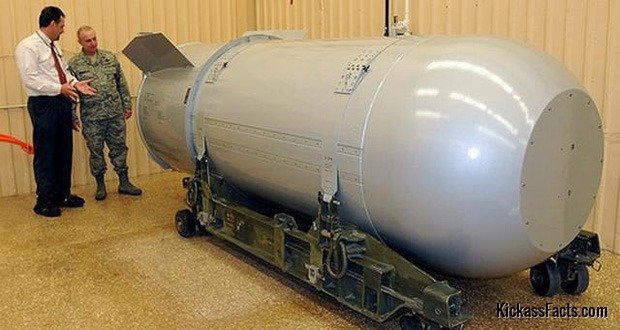 The 9 megatons of TNT in B53 staked their claim as the most powerful warhead ever. It is one of the last very high yield thermonuclear bombs in the U.S. service but is no longer used actively. 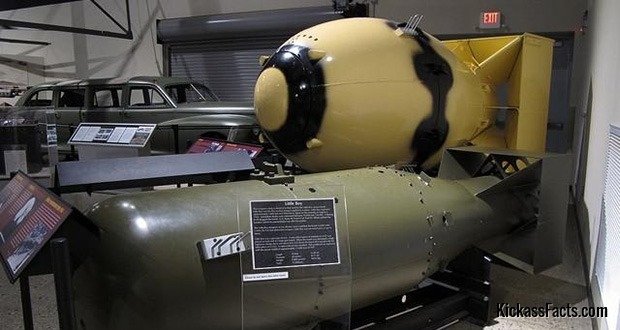 We all are familiar with the Nagasaki and Hiroshima bombings that changed the course of history during the last World War. Named after film characters, these two infamous nuclear bombs gave humanity a shocking memory of what warfare can do to a nation and its future generation. 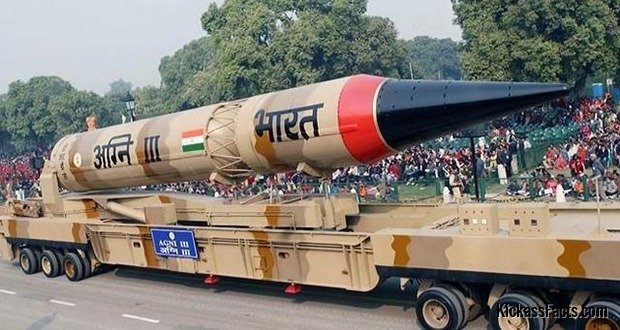 The Agni missile is a family of medium to intercontinental range ballistic missiles developed by India, named after one of the five elements of nature. 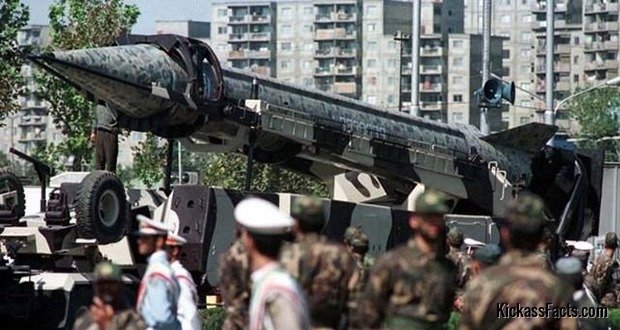 A class of long range Iranian missiles that could potentially reach up to 5,000 km, Shahab missile upgrades are shrouded in secrecy but the assumption is that they would be used during a possible invasion by Israel. 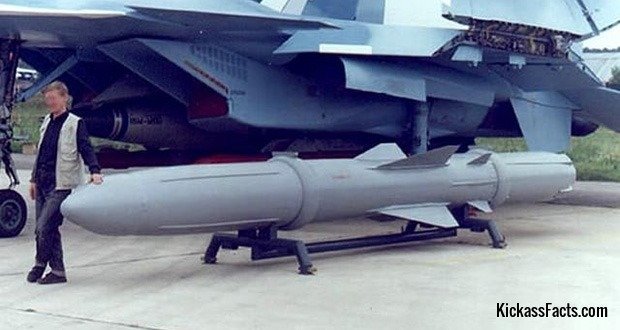 Other than the fact that its recorded speeds are between Mach 2.9 up to a whopping Mach 5.7 making it way faster than the previous item on this list, this Russian supersonic anti-ship cruise missile can also effectively sink a US carrier. That’s powerful. 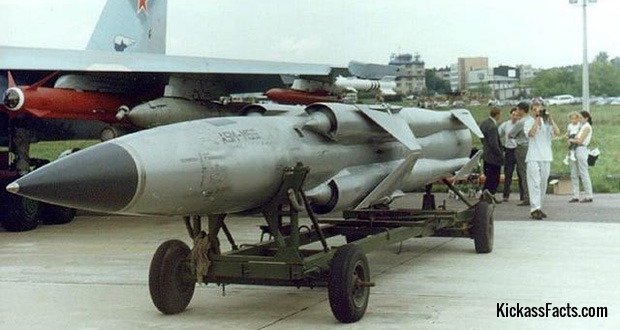 With a top speed of Mach 3, this Russian supersonic ramjet powered cruise missile makes it hard for enemies to counter attack. Not only that, because of the active military weapons’ secrecy, little is known about it’s background except for some measurements, calculated speed and a few other bits of very basic information. 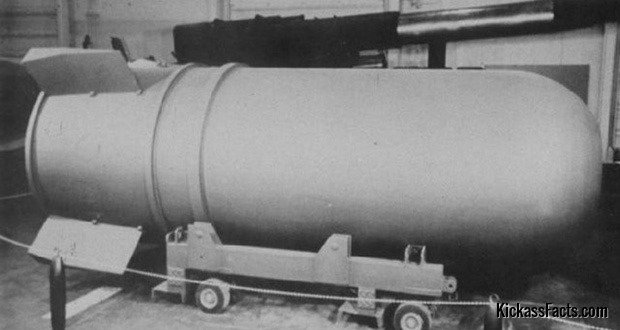 This gravity bomb is the United States’ most powerful nuclear warhead ever but has already been retired in 1957. The only 2 bombers that carried it were the B-52 Stratofortress and B-47 Stratojet. 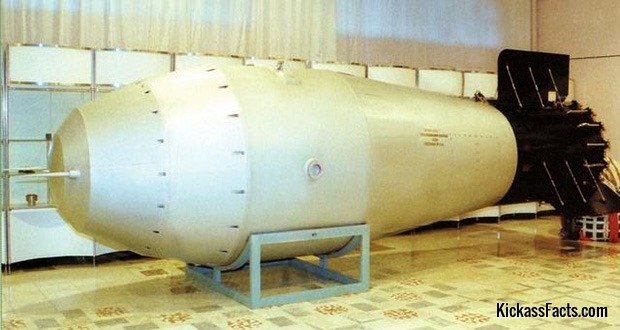 Remember those enormous mushroom cloud explosions in history books? Well those were caused by these guys. The Tsar Bomb had a mass of 27 tons and would create a fireball with a radius of 3.5 kilometers. 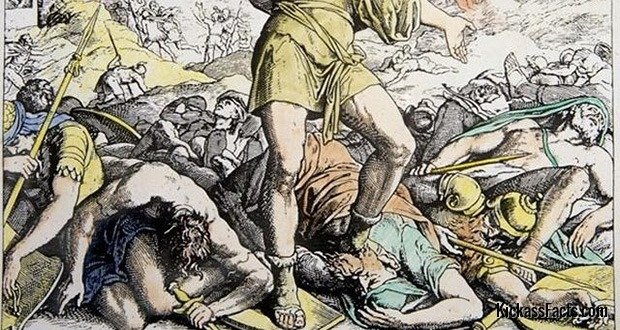 Nuclear bombs and lasers are scary and powerful, no doubt about that. But as they say there’s more than one way to skin a cat, and if you’re going for slow, mentally devastating destruction sometimes launching the diseased riddled bodies of prisoners that you’ve executed back over the city walls is the most sadistic way to go about decimating a population.