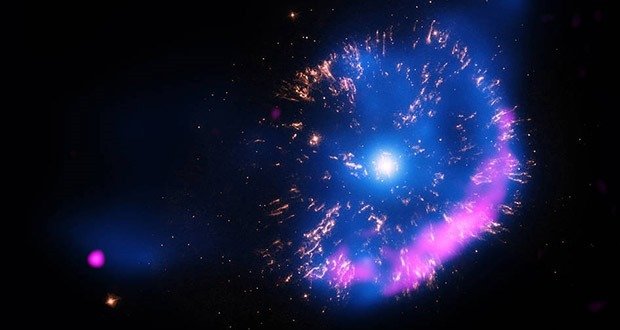 A classical supernova is a thermonuclear explosion on the surface of a White Dwarf star. A White Dwarf is a dead sun-like star, slowly cooling and losing its glow. Classical Supernovae are basically mini-supernovae.

These kinds of explosions occur when the dead star’s still powerful gravity pulls in enough hydrogen and space debris to reignite nuclear fusion. The resulting instability causes the new matter to explode outwards for a short period much like a normal supernova does. It takes layers of the star with it. 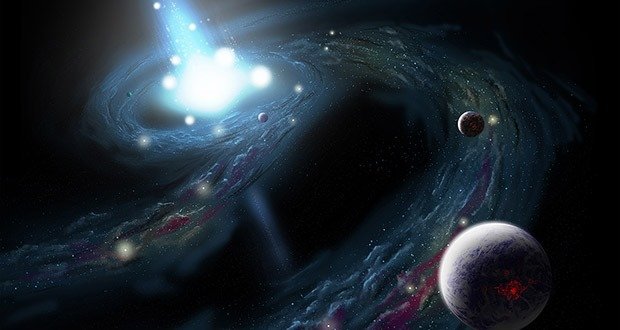 A White Hole (WH) is the (highly unsupported) idea of the possibility of anti-black holes. Their speculated properties include an outward stream of matter exploding into our universe at every resonant frequency whilst no matter can enter it.

One idea is that when a Black-Hole (BH) ‘dies’ the matter and energies that it has collected re-explodes back into the universe. Almost as if there is a point where a black hole just cannot physically contain any more mass, so it inverts and spills out.

Another more common idea sees them as the ‘exit point’ for an Einstein-Rosen bridge (or wormhole). Think of it like this. A black hole is a vortex in space that you can enter into but never return out of. This theory sees a black hole as an entry point to a wormhole. Wherever you then come out is therefore the end of the wormhole and by logic a white hole.

You can see variations of while hole theory littered around science fiction because they make sense scientifically, but are (currently) completely fictional. As an example, the planet factory from The Hitchhikers Guide to the Galaxy sits inside its own version of a while hole. We know that these do not exist because of how bright they would be if they did. 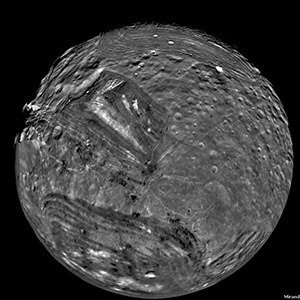 Miranda is a strange little moon of Uranus. It seems un-extraordinary, being one of the smaller moons in the Solar System; however, Miranda has a quirk. For some unknown reason, it is completely trashed.

It has a very strange physical structure, with bizarre segments missing or oddly shaped. This strange look has caused Miranda to have the largest cliff face in the entire Solar System (12 times deeper than the grand canyon). If you look at the image, it almost seems like it’s been blurred, or distorted.

A bunch of theories exist as to how it managed to obtain its gigantic scars and random geometry. Miranda is supposedly made of predominantly Water Ice and at some point may have been ‘melted’ by tidal frictions with Uranus’ other moons. Another theory states that it could have been the subject of a massive collision which split the moon in two, the fragments then somehow reassembling themselves.

In either case, many scientists see this as a kind of Frankenstein’s monster moon, appearing to be a jumbled up mess of other parts just hastily smashed together. 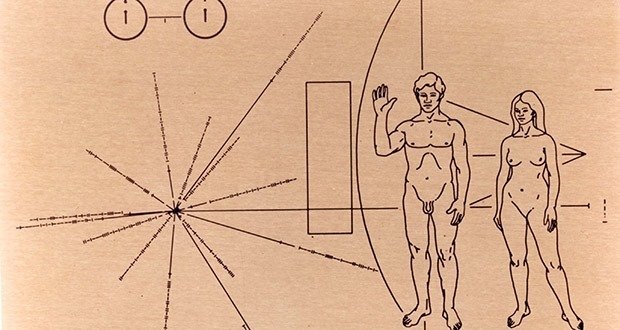 40 years ago Pioneer 10 was launched. It was the first man-made object to navigate through the asteroid belt of the Solar System before taking up close photos of Jupiter and Callisto (as well as test some trajectories for Voyager later on). It was then launched into deep space as the first man-made object to achieve escape velocity from the Solar System.

Pioneer 11 was very similar to pioneer 10, just with a single instrument difference. It was the first to reach Saturn and the second to traverse the asteroid belt and Jupiter. We lost contact with it on the outer rim of the solar-system due to the distances involved. It is likely nearing the edge of the solar system as you read this.

Both of these probes also had a unique feature. Fixed to their support struts is a golden version of the plaque you see above. It is a time capsule to any species out there. Telling them who we are as well as some basic information on what we know and where to find us.

Being millenia from anywhere in the direction it is headed and surrounded by a vaccum (and made of unreactive gold), the plaque will likely last thousands and thousands of years. It may well outlive the human race. This would make it and any of it successors the last visual representations of humans to ever exist.

Some other, newer probes have similar more modern ideas. A new probe going to the moon is offering people to send their DNA for example.

The top left of the plaque symbolises hydrogen in one of its configurations. The large web like diagram is our sun in relation to 14 pulsars (commonly considered the best way to charter space as like a cosmic GPS) and the center of our galaxy. To the right is 2 humans, overlaid on a silhouette of the spacecraft. At the bottom sits Earth in comparison to the other planets with Pioneer’s path (yes including Pluto).

Something quite interesting to note here is the binary representation for 8 checked out in the far right. It is used elsewhere in the image to better present the distances as planetary distances and confirm certain aspects of the representation for hydrogen. If you look at the planets you can see small bits of coded data, this binary 8 is used to better quantify these numbers. 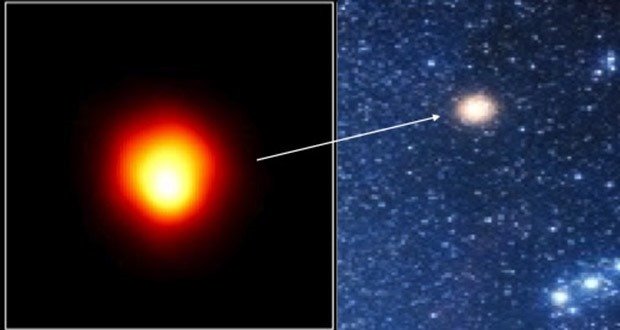 Anyone that has seen Men In Black will recognize that this is a picture of the Orion constellation (see his belt?). Betelgeuse (pronounced Beetlejuice), is one of the biggest and brightest stars in the night sky. It is predicted to explode quite soon in astronomical terms (at most between now and a million years). We know this because it has been dramatically shrinking recently, a normal prelude to a supernova.

The explosion wouldn’t cause much damage to the Earth at all but in the night sky it will appear as a beautifully intense bright Star. Possibly even visible during the day.