Here is part 3 of strange and unsolved cases. 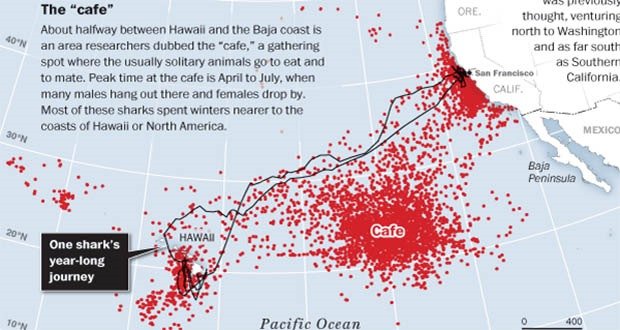 In a nut shell, the White Shark Cafe is the name given to a spot in the Pacific Ocean, located about halfway between the West Coast of the US and Hawaii. While the practice of tracking Great White sharks began as early as the 1970’s, it wasn’t until the early 2000’s that the data began to be complied in a meaningful way, (helped by the use of tracking devices) and a migratory pattern was observed. While around 20% of the sharks tracked headed to Hawaii for the summer, 80% returned year after year to a seemingly arbitrary spot out in the middle of the Pacific, and hung out there for several months, until the pinnipeds they feed on returned to the West Coast. The reasons for this gathering are as of yet unknown.

During their time spent in the Cafe, the white sharks are found to practice repeated diving to depths of up to 500m (1640 ft.), as often as every ten minutes. The age and sex of the sharks that gather in the cafe also varies widely, which, as I’ll discuss in a moment, throws a bit of a wrench in one of the theories as to why the sharks gather here. Great Whites are also known to be, for the most part, solitary hunters, so the large grouping of so many individuals for such a long period of time is an anomaly.

Mating. Obviously, with any animal that congregates with members of the opposite sex for any given amount of time, this has to come in as a reason. It is hypothesized here that the diving behavior seen is done for some type of either scenting or endurance test between males.

As mentioned above, just the differences in the ages of sharks that come to the Cafe makes the mating theory a bit of a stretch, as both adult and juvenile sharks are present. Great Whites typically don’t reach sexual maturity until around 26 years for males, and 33 years for females, and mothers do not care for their young after birth, as far as we know, , so the juveniles being at the Cafe seems strange if it is used for a mating ground.

The second theory is Feeding. Any animal that heads to a certain destination on a regular basis is more often than not following a food source (at least once a mating area has been ruled out). While it does make an interesting theory for the Cafe, the stats of the area tend to make this a bit hard to believe. The area has been described by many as a “desert” in terms of food availability. As far as scientists know so far, there are no major migrations of fish that move through this area at this time, and no set population of food large enough to sustain a large population of Great Whites. The other possibility, which could also explain the diving behavior, is that the sharks are feeding on giant squid. Source. However, this theory is heavily debated, given the ready availability of food sources elsewhere.

So, what is causing these sharks to meet in such a lonely, desolate place for such long periods of time? Heck, how are they even finding this place, as by all accounts there is not much there to begin with. Is it mating, food, a mixture of both, or something entirely different that make the Cafe such a hot spot for Pacific Great Whites? With shark species of all types facing endangerment and extinction, do you think we will be able to solve this mystery before it’s too late?

Here is a great wiki on white sharks and source of stats. 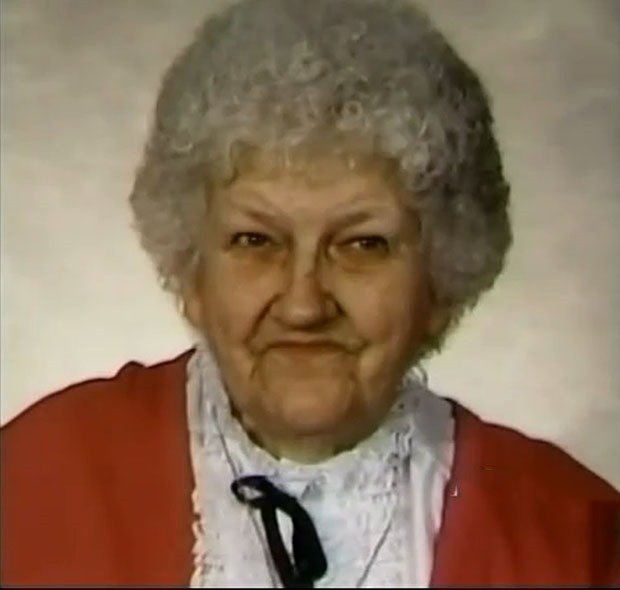 At around midnight on June 22, 1991, factory worker Charles Holden was leaving a fast food restaurant when a stranger came to his truck, asking for a ride. He said that his sister was having a baby and that he needed to get to the hospital. Charles first said he couldn’t because he lived just a few blocks away but eventually changed his mind and took him.

A few minutes after getting picked up, Charles stopped at an intersection where he would normally turn to drive home, but then the stranger attacked him, demanding his money as well as his truck. He ran to a store to get help, but the stranger, armed with a screwdriver, raced towards him, and at that point he said he would take him where he wanted to go. However, as the stranger went around to enter the passenger side of the truck, Charles sped off and the stranger tried to run after him but gave up. He then began to drive around a bit trying to shake off his experience. When he finally started to return home, he noticed the stranger was lurking around his home and he drove away again to call the police at a pay phone. A police officer went with him to his home and that of his mother, Dorothy Donovan, who lived in the main behind his. They found that the back door window had been broken and there was blood inside the house. They then went up the stairs to her bedroom and found her dead. She had been stabbed to death. Nothing had been stolen from the house, and authorities suspected that Charles was responsible, until physical evidence was found that did not belong to him. The stranger remains unidentified.

Fortunately, this one is solved. In February 2006, DNA evidence at the scene along with the bloody palm print on the banister identified Dorothy’s killer as Gilbert E. Cannon of Delmar, Maryland, who was arrested and charged with first degree murder. He told authorities that he was on drugs at the time of the murder and was looking for a place to stay. Furthermore, he said he chose Dorothy’s house because it was the first one he could find that didn’t have any lights on. He pled guilty to the murder and was sentenced to life in prison without the possibility of parole.

03. The Case of Bobby Dunbar 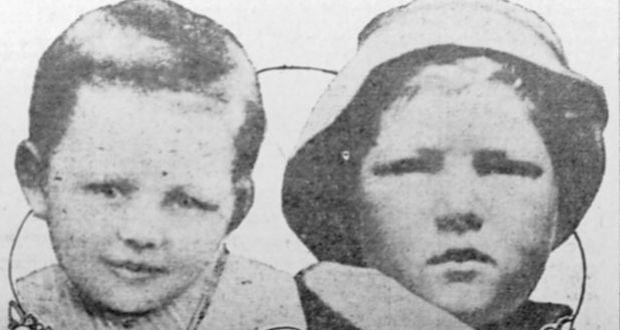 Bobby Dunbar was an American boy whose disappearance at the age of four and apparent return was widely reported in newspapers across the United States in 1912 and 1913. After an eight-month nationwide search, investigators believed that they had found the child in the hands of William Cantwell Walters of Mississippi. Dunbar’s parents claimed the boy as their missing son. However, both Walters and a woman named Julia Anderson insisted that the boy with him was Anderson’s son. The court system eventually sided with the Dunbars and they retained custody of the boy, who proceeded to live out the remainder of his life as Bobby Dunbar.

In 2004, DNA profiling established in retrospect that the boy found with Walters and returned to the Dunbars as Bobby had not been a blood relative of the Dunbar family. 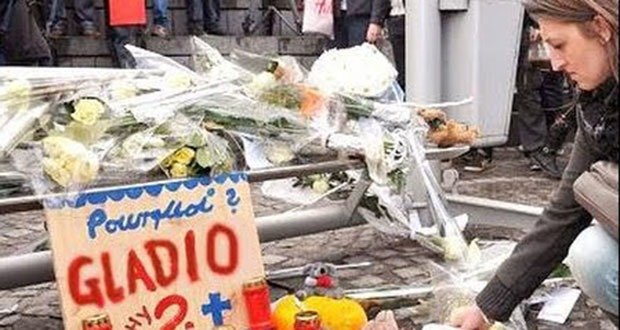 The Brabant Massacres were a series of particularly brutal attacks that left 28 people dead between 1982 and 1985. To this day, the culprits dubbed the Brabant Killers have still not been identified. The raids were usually carried out by three men, who held up supermarkets, stores, hostels, and a gunsmiths in small towns across the Belgian province of Brabant.

The attackers were known to open fire on customers and store owners for no apparent reason. Several children died in the attacks. During their last series of robbery, after exactly 666 days of silence, they shot and killed eight people.

The minute they got out of the car, they started shooting at everybody. They would even throw away the money after the robbery, which hinted strongly that robbery wasn’t a motivation for what they were doing.

The investigation was never closed by the Belgian police. Even in July of 2015, a neo-Nazi was arrested and suspected of having been part of the gang. He denies any involvement. New developments also claim the gang operated from a US base. 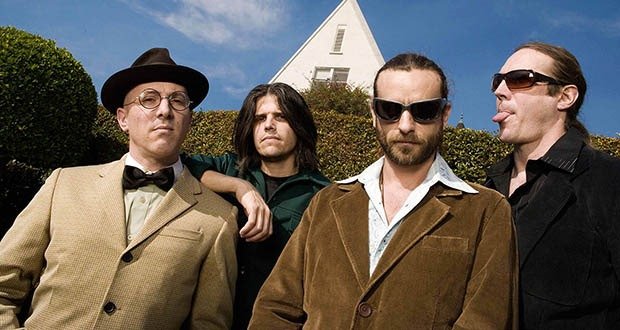 Progressive rockers TOOL supposedly released an item of memorabilia that contains a hidden complete studio recorded song with vocals and the whole 9 yards, a complete song.

Unfortunately, for anyone hoping to stumble upon the hidden tune is out of luck, as the band is intentionally vague about, well, everything they do. Not to mention, they like to prank their fans, like the one time they reported the band being in an accident and seriously injured, canceling a tour. That being said, it’s entirely possible there is no song whatsoever, although I would like to believe otherwise.

Here is a summary of hints provided by the band in interviews and newsletters. I tried to boil it down to something digestible. The song is titled “Problem 8: The Reimann Hypothesis” It was “ingeniously hidden” in or on some limited production piece of TOOL related memorabilia, of which maybe 30 copies exist. It is hidden in such a way that one “wouldn’t ever think to play it”, likely a non-traditional format or something completely unique. It was probably recorded in 1995/96, likely when sophomore release Ænima (1996) was recorded. Length of the song is “somewhere in the 6-minute range.” It was possibly inspired by the Klaatu-Beatles controversy, wherein the Beatles were suspected of releasing albums under pseudonym Klaatu, which turned out to be a band that just sounded like the Beatles. The media it is stored on is apparently becoming obsolete. The most recent hint was simply “Reel to Reel.”

If there really is a hidden song out there, somebody has it hanging on their wall or in a display case, and looks at it every day. Since this mystery is relatively unheard of outside of TOOL forums and fan sites they might not even know to look for it.

AskReaders: What is the creepiest thing that has happened to you? - Part 2