Here is a list of torture devices of the past. 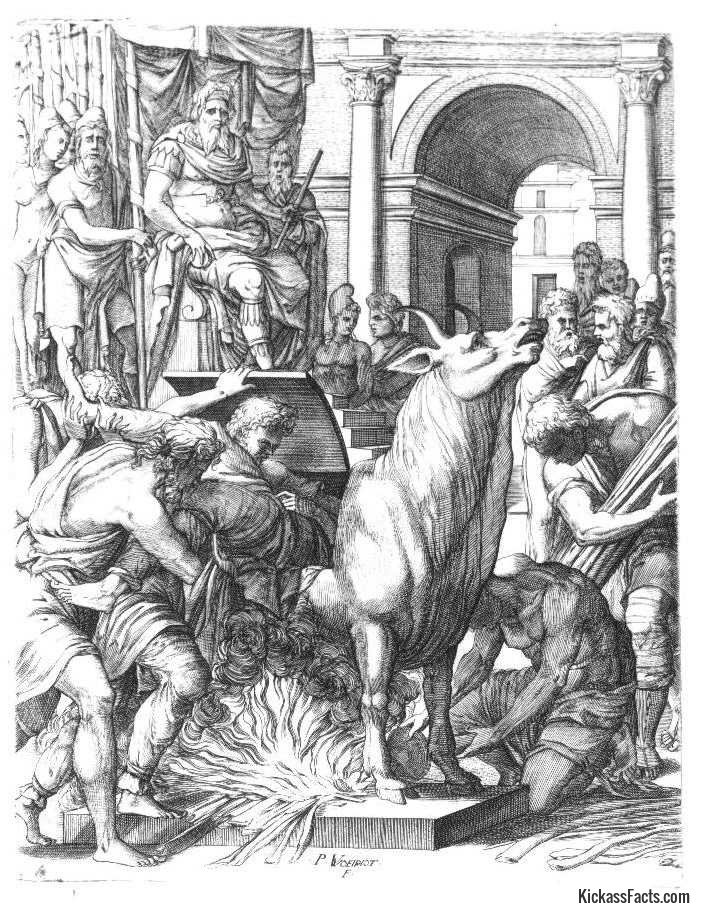 Invented by the Greeks and said to be a crowd pleaser, the brazen bull was a bronze or copper chamber, often shaped like a bull, placed over a fire with a victim trapped inside. Over an excruciatingly long period of time, the victim would be slowly roasted alive. The Greek version of the brazen bull had hollow tubes leading out of the interior to better carry the victim’s screams. 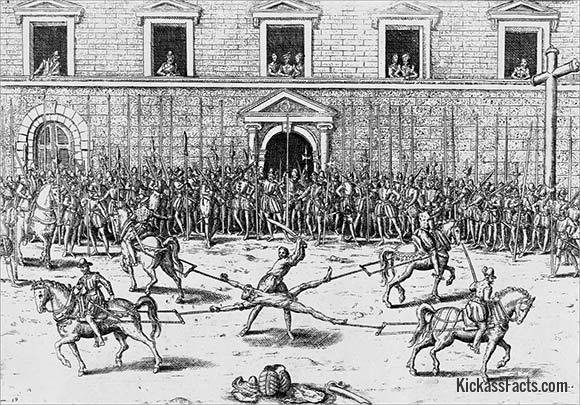 With each limb strapped to either a wheel or large animal, the victim was pulled to his or her literal breaking point. 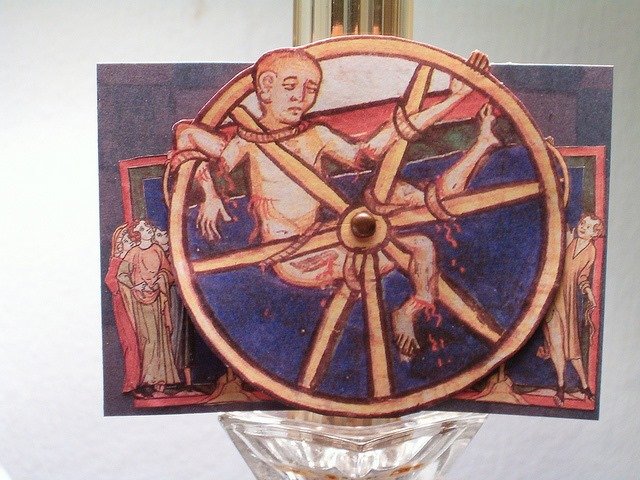 The wheel was a torture device whose uses were limited only by the imagination of the torturer. Held in place while the wheel turned, limbs could be easily broken. Strapped to the outside, the victim’s spine could be stretched to the breaking point. Merely strapped to the spokes, the victim was helpless against lashing, hammering, roasting, impalement, or wild animals. 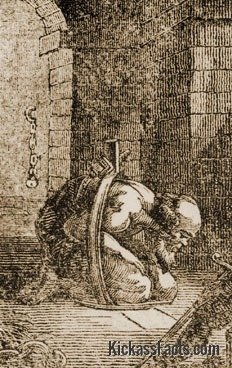 The scavenger’s daughter was devised as a perfect complement to the rack, compressing the victim’s body instead of stretching it. The tightness of the device could be gradually increased, eventually breaking the ribcage and dislocating the spine. 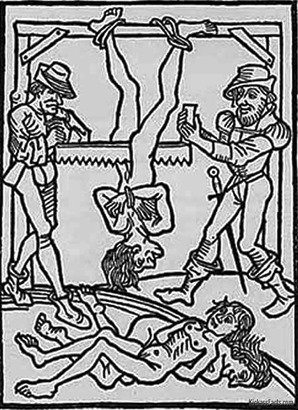 Records of this method of execution date back thousands of years from all over the globe. In the middle ages, this brutal punishment was often reserved for traitors, heretics, and homosexuals. 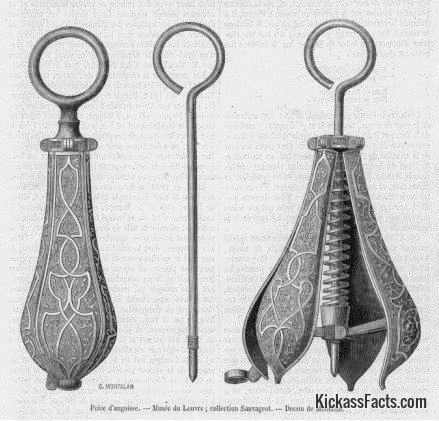 A twist of the screw causes the leaves of the pear to expand. When inserted into a vagina, anus, or throat, the pain would be excruciating. 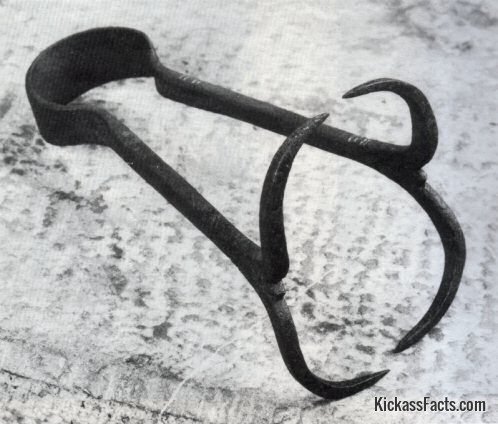 The masters of torture in medieval Europe had many devices reserved solely for women. These iron claws were designed to rend the flesh from the breasts. 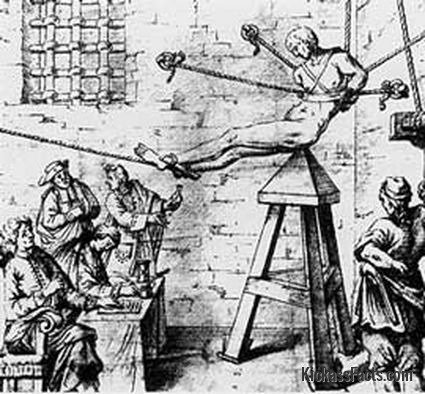 Placed atop this wooden or iron pyramid, the victim had to constantly keep his or her anus clenched or suffer gradual impalement. The anticipation of eventual, inevitable doom must have been agonizing. The tearing of muscle and tissue to follow, even worse. 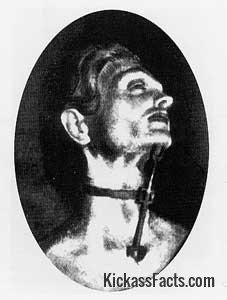 The heretic’s fork was used not so much as torture but punishment after a confession had been elicited. Speaking or swallowing when the fork was in place was nearly impossible. It’s said that the fork caused so many to die of disease and infection, it was often an accidental death sentence. 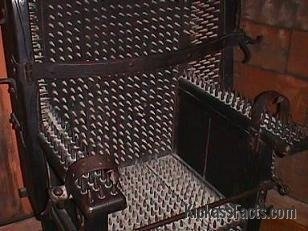 Strapped to the chair the victim could be subjected to further tortures– foot roasting, rats, flails– unable to struggle against his or her torment. 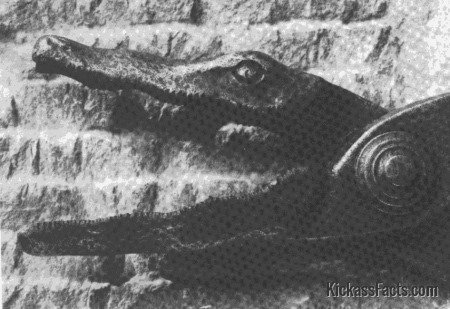 Few records of the use of crocodile shears have survived, almost all as punishment for attempted assassinations. The male version of the breast rippers, the victim’s penis was placed inside the shears and the jaws closed. The mangled ribbons of flesh that remained would serve as a lifelong reminder of the consequences for impudence. 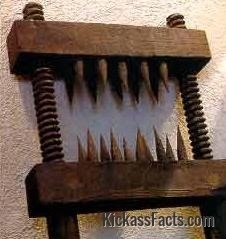 Used on more than just knees, any flesh caught between the slowly closing jaws would be torn to pieces. A well-placed mallet swing would render a limb useless in an instant. 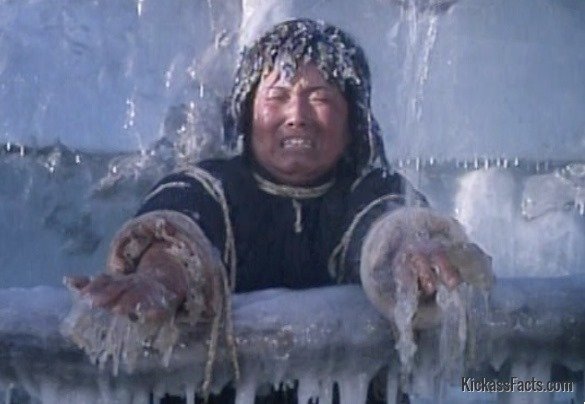 Still used in many regimes today, the victim is restrained outside in freezing weather, slowly covered in water, and allowed to freeze. 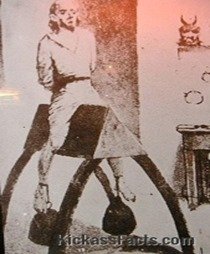 Straddling a wedge, weights were gradually added to the victim’s feet. There reports of so much weight being added, the “donkey” would slice a victim in two.