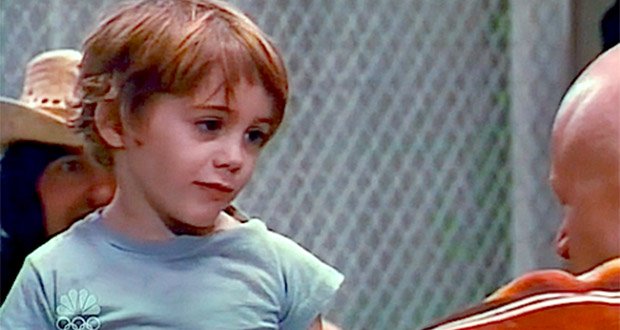 We have decided to do a series of articles about actors and their first on-screen appearances. Here is the first in the series.

Robert Downey Jr. at 5 years of age made his screen debut in the movie “Pound” released in 1970. The movie written and directed by his father Robert Downey Sr.

His only line was: “Have any hair on your balls?”

Unfortunately, he didn’t get the part. Instead, his career began with his appearance in several commercials, educational films and as a supporting cast member of the sitcom “Growing Pains” (1985). It wasn’t until 1989 that DiCaprio landed his first credited role: two episodes of “The New Lassie.”

Anthony Hopkins made his first professional stage appearance in the Palace Theatre, Swansea, in 1960 with Swansea Little Theatre’s production of “Have a Cigarette”. In 1965 (age 28) he made his screen debut as Dr. Harding on the TV series “The Man in Room 17”.

As the daughter of actor Jon Voight, Angelina Jolie appeared in the media from an early age. She was 7 years of age when she was featured in her first film “Lookin’ To Get Out” (1982) as Tosh, also starring her father.

In 1991, Reese Witherspoon (age 15) attended an open casting call for “The Man in the Moon”, intending to audition as a bit player, she was instead cast for the lead role of Dani Trant, a 14-year-old country girl who falls in love for the first time with her 17-year-old neighbor. Her performance was regarded as “memorably touching” by Variety magazine, and critic Roger Ebert commented, “Her first kiss is one of the most perfect little scenes I’ve ever seen in a movie.

As a child, Jake Gyllenhaal was regularly exposed to filmmaking due to his family’s deep ties to the industry. He would audition for the film “The Mighty Ducks” but his parents did not allow him to appear in it because it would have required leaving home for two months. Instead, Gyllenhaal (age 11) made his acting debut as Billy Crystal’s son in the 1991 comedy film “City Slickers”.

Scarlett Johansson began acting during childhood, after her mother started taking her to auditions. She would audition for commercials but took rejection so hard her mother began limiting her to film tryouts. She made her film debut at the age of 9, in the 1994 fantasy comedy, “North”.

Here she is, 9-year-old, during a casting audition.

Before Al Pacino gained his celebrity status he acted in basement plays in New York’s theatrical underground. He made his screen debut (28-years-old), as a cast in “Deadly Circle of Violence”, an episode of the ABC television series N.Y.P.D., premiering November 12, 1968.

Joaquin Phoenix’s first acting job was a guest appearance on the television show “Seven Brides for Seven Brothers” also starring his brother, River Phoenix. The series told the adventures of a parentless family of rowdy brothers trying to run the family ranch in northern California. Here he is (8-year-old) on an episode called “Christmas Song” from 1982.

Clint Eastwood’s acting debut was an uncredited bit part as a laboratory assistant in the 1955 film “Revenge of the Creature”. Over the next three years, he had uncredited bit parts in several other films. He was criticized for his stiff manner, his squint, and for hissing his lines through his teeth… a feature that would become a lifelong trademark.

After dropping out of UCLA, James Franco decided to pursue his dreams as an actor, combining acting classes with a late-night job at McDonald’s to support himself. He began auditioning in Los Angeles and his first paid role was a television commercial for Pizza Hut, followed by a few guest roles on different television shows.

Nicolas Cage (nephew of Francis Ford Coppola) made his first screen appearance, age 17, on ABC’s comedy film “Best of times” (1981). You can see him working out, dancing on a supermarket and giving an inspirational speech. It is also the film debut of Crispin Glover.

Prior to her career as an actor, Michelle Pfieffer worked as a check-out girl at Vons supermarket. In 1978 (19-years-old) she participated and won the Miss Orange County beauty pageant. Following her participation she acquired an acting agent and began to audition for television and films.

Morgan Freeman first became known to the American public through the PBS kids show “The Electric Company” (1971-1977). Notably as “Easy Reader”, “Mel Mounds the DJ”, and “Vincent the Vegetable Vampire”.

Sammy Davis Jr. a.k.a. the “greatest living entertainer in the world”. At age 7, Davis played the title role in the film “Rufus Jones for President”, in which he sang and danced with Ethel Waters. Initial release: September 9, 1933.

Affleck first appeared, age 7, in a local independent film called “Dark Side of the Street” (1981). However, his biggest success as a child actor was as the star of the PBS children’s series “The Voyage of the Mimi” (1984).

September 8, 2015
Latest Posts
Subscribe to Blog via Email
Did you know?
Loading...
Facts of the Day
Registration is disabled.