We asked our regular contributors through e-mail, What is the biggest movie plot-hole you have ever seen? We got many interesting responses. Here are some of them. We have just copied and pasted their responses, not editing them in any way and most of the respondents have requested to stay anonymous, so no names will be published. 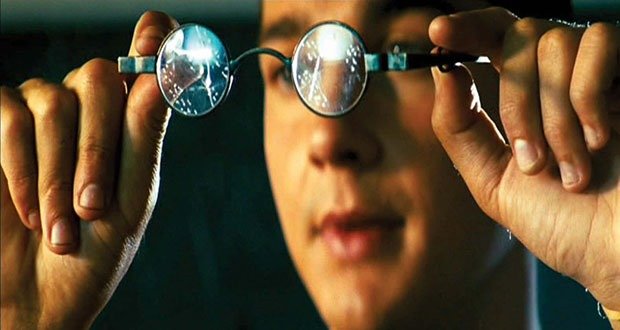 1. In Transformers why didn’t the Decepticons just buy Sam’s grandfathers glasses on ebay?

2. Any Christmas movie where Santa is real and none of the adults “believe” in him. Where do you think the presents for your kids came from if you didn’t buy them?

4. In every romantic comedy based in New York: how can these young people afford to live in New York? Welcome to my 2,000 sq foot Manhattan apartment I pay for by waiting tables. Oh, none of my furniture is second hand or IKEA. Also, when I go shopping I always buy a loaf of French bread and it sticks out the top of the bag I carry.

5. We’re getting chased by Dinos but, oh, here’s a 20-year-old dilapidated jeep we can instantly repair and run on 20-year-old gasoline sludge. Jurassic World. 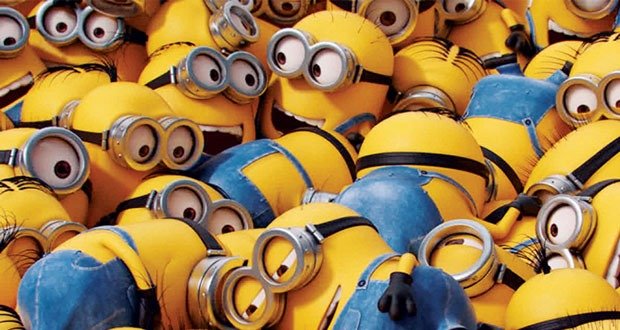 6. Okay this has bothered me forever: basically, Minions itself is a giant plot hole. Gru invented his minions- he rearranged the DNA in corn and created each one, which is why each one has a name, and he knows every single minion. But in Minions, it does an entire 180, and says that the minions were living during the age of the dinosaurs. This totally puts the minions in some sort of confusing “existence limbo”- even if there’s evidence of the minions being invented by Gru in his lab (can’t find the picture right now), was Minions the movie trying to re-invent the canon? or did they disprove Gru’s inventing the minions? It keeps me up at nights and I keep trying to explain it to any kid I can and it bothers them too.

8. In G.I. Joe: The Rise Of Cobra there is a scene near the end of the movie when the Joe’s blow up the polar ice caps. Large chunks of ice then proceed to subj  destroying the underwater cobra base. Think about it. Ice doesn’t sink in water.

9. The Butterfly Effect. The whole point of the movie is that going back in time and changing anything, no matter how small, will have drastic changes to the future. While in prison Ashton goes back in time and stabs both his hands in a classroom in front of everyone in his class. When he goes back to the future he should probably be in a mental institution considering how crazy you’d have to be to do that. The other problem of course is that his cellmate would never have seen the change, to him Ashton would have always had those scars on his hands. They throw the whole premise of the movie out the window with that scene.

10. Rocky leaves for Russia to fight Ivan Drago. His son is 5 years old. When he returns, his son is 15. 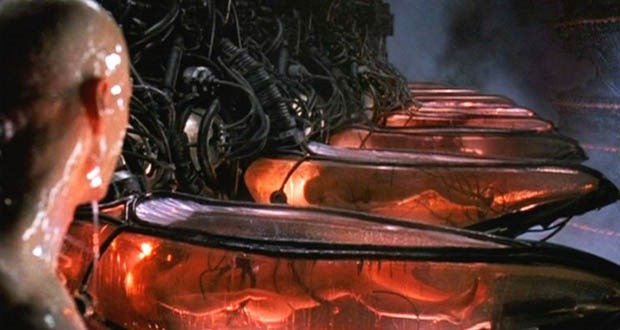 11. The Matrix: if they’re so short on energy, why do they use humans, who are net energy sinks (we use more than we produce, like all life on earth), rather than tapping into those huge storms to extract wind power?

12. In The Rock, Sean Connery’s character breaks into Alcatraz by rolling under a furnace using knowledge of the flame burst timings he had acquired while breaking out. He opens a door to let the others through. On his way out, why didn’t he use the door?

13. Star Wars a New Hope- Vader captures Leia and interrogates her. Doesn’t know it’s his daughter or sense the force in her. Somehow knows Luke is his kid in Empire and can sense the force in him. In Jedi Luke reveals Leia is his sister and she has the force too. If true, how come Vader couldn’t sense this in the first movie? I think Lucas made it up as he went along.

14. Maybe not biggest, but one that has really irritated me. The hamster ball scene. Everybody is rolling around in the balls having a great time. Then the I-Rex starts wreaking havoc, so they announce on a park wide PA system that everyone needs to seek shelter, and all hamster balls should return to base. Of course, the children don’t listen and continue to explore. So then the aunt calls them on their cell phones to be like, hey seriously, giant dino on the loose, get back here. Oh no though!!! Poor cell reception. The most advanced theme park in the world has bad cell coverage. The reaction to this is what drives me nuts. Everybody freaks out and is like we have to go get them. They give up trying to contact them. HOW BOUT YOU USE THE SAME PARK WIDE SYSTEM THAT YOU JUST USED TO CALL IN EVERYBODY ELSE. THE ONE THEY JUST IGNORED. GET ON THERE AND BE LIKE “HEY [CHILDREN’S NAMES] YOU THINK WE ARE PLAYING? GET BACK HERE OR YOUR DAY WILL BE RUINED.”

15. LOOPER! The whole plot is that in the future you can’t kill anyone. It’s so impossible to get away with murder than it’s easier to send people back in time and have them murdered by someone at some point in the past than it is to murder them. Then – spoilers – they get all angry at Bruce Willis and shoot his wife without even thinking twice about it. IF YOU CAN MURDER HIS WIFE IN THE MIDDLE OF THE DAY WHY DIDN’T YOU JUST MURDER ALL OF THE OTHER PEOPLE YOU NEEDED DEAD INSTEAD OF CONCOCTING THIS RIDICULOUSLY ELABORATE CONVEYOR BELT OF SELF-MURDERING TIME TRAVELLING ASSASSINS TO KILL PEOPLE. 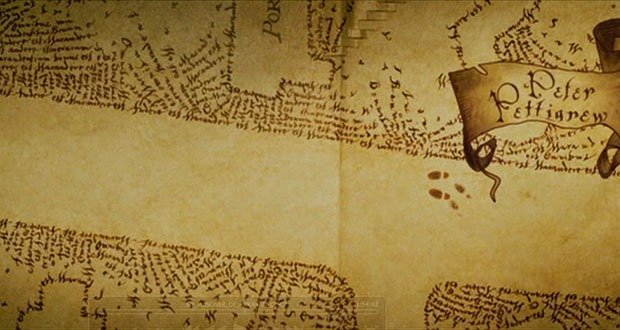 16. In Harry Potter, how come Fred and George never noticed their brother sleeping with a man named “Peter Pettigrew” for all those years they had the marauder’s map?

17. The Dark Knight – At the very end, Bruce Wayne states that he could be the one who killed those people, taking the fall for Harvey Dent. That is why he needs to be chased and hunted down. But wait, didn’t we follow a crazy madman who blew up a hospital, police station, two warehouses and potentially two boats and had terrorized the entire city couldn’t be blamed for the deaths of those people? And if no one believes the Joker himself, didn’t it seem he had, like, 100 other followers that could have done it while he was doing something else. Especially since they were cops and law officers. That one never made sense to me.

18. One of the final destinations. Might be final destination 3. The premonition takes place at an amusement park. One of the teens with a video camera hops on the roller coaster with several other teens. During the ride, things start going wrong with the hydraulics, but it wasn’t until the kid with the camera drops the camera and the strap wraps itself around the track and completely cuts the hydraulic hose when the coaster goes by. This causes the roller coaster to derail and explode killing everybody aboard. Once the premonition ends, the main character freaks out and gets a good chunk of people off the coaster including the guy with the camera!!!! The coaster takes off in real life this time and still derails in the exact same way. That coaster should have never crashed and nobody should have died. This should have led to a lot more avoiding death deaths throughout the movie.

19. In Harry Potter, when “invading” Gringotts Hermoine’s purse doesn’t explode even though her bigger on the inside spell would fade when they go through the waterfall.

20. This scene has bothered me ever since I saw the movie in theatres. In one of the final scenes in I am Legend Will Smith could have just popped the grenade next to the glass and tucked away inside the safe, rather than dramatically running right at the zombie leader guy and killing himself. 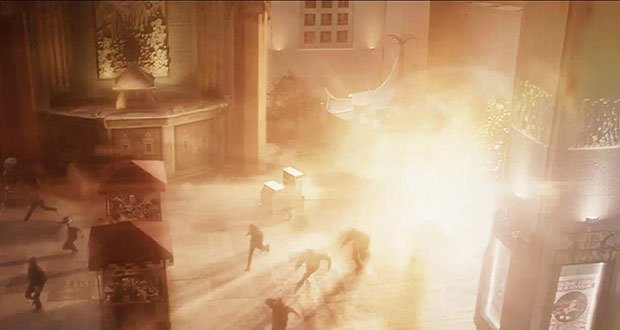 21. In Iron Man 3, when the guy explodes at the theatre and injures Happy Hogan, they find his dog tags and use them to link him to the other bad guys. The problem is, unless his dog tags are made out of pure Osmium, Rhenium, Tungsten or Carbon (and they are not), they would have disintegrated along with the rest of his body and clothes, since they specifically say his temperature reached over 3000 degrees, and he was holding the dog tags when it did so.

22. Interstellar. It is easier to send people out to space and through a black hole than it is to create a greenhouse that grows plants on earth.

23. John Wick. It’s illegal to pump your own gas in New Jersey.

24. In ant man it says that when something is shrunk it keeps the same weight and density, so the tank keychain would have been way to heavy to carry around in Pym’s pocket.

25. All the lawns in every neighborhood are perfectly manicured in The Walking Dead.