So one of our readers asked us this question the other day: Michael Phelps beat a 2000 year old Olympic record set by Leonidas of Rhodes in 152 B.C for the most Olympic wins ever. Are there any other ancient Olympic records that have remained unbroken?

I wouldn’t be surprised if there are more swimming events that Phelps competes in than ancient events as a whole. There were three fighting events: boxing, wrestling, and pankration (a combination of the two, a bit like MMA). Two riding events: chariot and horseracing. Four different running events (including the race in armor), and the pentathalon. So I think it is a bit unfair to Leonidas. 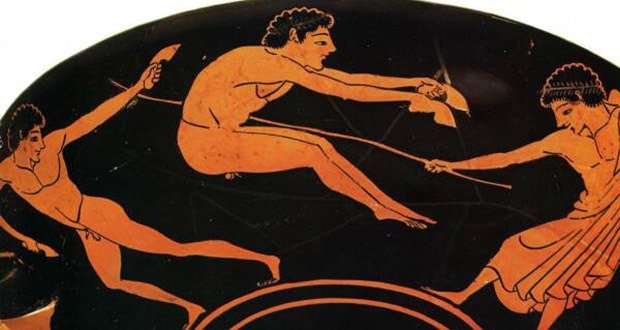 The one that comes to mind is Phayllos of Kroton, who leapt so far he cleared the pit and broke his leg. As the pit was about fifteen meters long, this is well beyond the 8.9 Mike Powell managed in Barcelona. That being said, the sheer size of this leap has made plenty of people a bit leery, and it does seem to be straining against the limits of the possible, and so there is a bit of a debate over what the long jump was actually like. One possibility is that the weighted halteres that the athletes apparently held while jumping was used in some way to add lift or effect the center of gravity, but modern testing hasn’t really provided a comparable effect. The simpler explanation is that it was just a triple jump, which makes 15 meters extremely impressive but well within the 18.3 meters that is the current record.

I should probably be clear that the Olympic events were not entirely fixed and there was probably some variation across time. That being said, the central aspect of the Olympic competitions was individual military quality. They tested martial excellence: for example the javelin throw and race in armor are pretty obvious, but also the long jump tested the ability to clear obstacles on the battlefield.

If you want to read more, Leuven has a great little site about the Olympics, I linked Phyllos’ page.

AskUs: Why have we not used IVF to impregnate an elephant with a wooly mammoth yet?