So one of our readers asked us this question the other day: What is the craziest WW2 story that you haven’t already shared on this site?

Ever heard the story of the submarine that managed to sink a train? 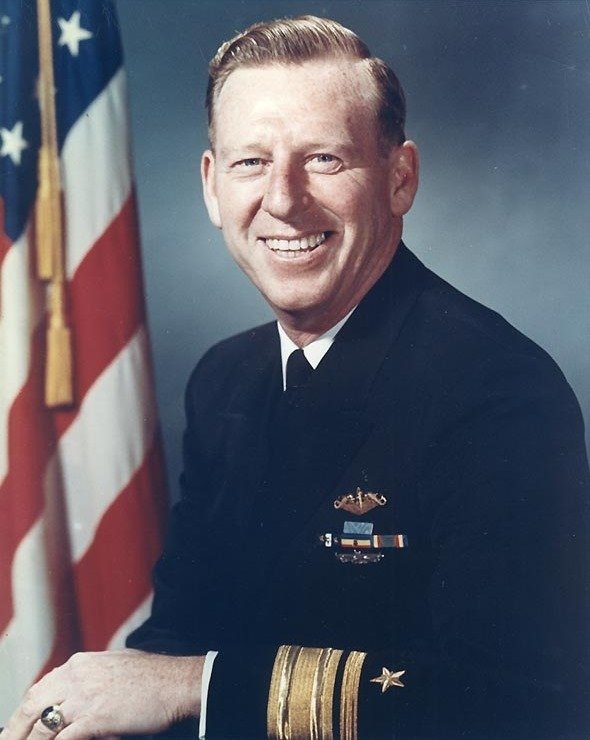 July 18, 1945 (Patience Bay, Off the coast of Karafuto , Japan ). It was after 4 A.M. and Commander Eugene Bennett Fluckey rubbed his eyes as he peered over the map spread before him. It was the twelfth war patrol of US submarine USS Barb, the fifth under Commander Lucky Fluckey. He should have turned command over to another skipper after four patrols, but had managed to strike a deal with Admiral Lockwood to make one more trip with the men he cared for like a father, should his fourth patrol be successful. Of course, no one suspected when he had struck that deal prior to his fourth and what should have been his final war patrol on the Barb, that Commander Fluckey’s success would be so great he would be awarded the Medal of Honor. 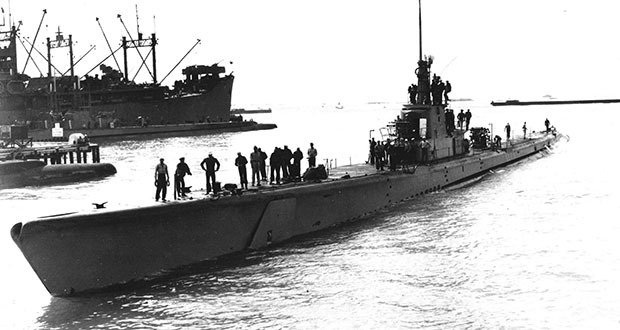 What could possibly be left for the Commander to accomplish who, just three months earlier had been in Washington, D.C. to receive the Medal of Honor? He smiled to himself as he looked again at the map showing the rail line that ran along the enemy coastline. Now his crew was buzzing excitedly about bagging a train.

The rail line itself wouldn’t be a problem. A shore patrol could go ashore under cover of darkness to plant the explosives, one of the sub’s 55-pound scuttling charges. But this early morning Lucky Fluckey and his officers were puzzling over how they could blow not only the rails, but also one of the frequent trains that shuttled supplies to equip the Japanese war machine. But no matter how crazy the idea might have sounded, the Barb’s skipper would not risk the lives of his men. Thus the problem… how to detonate the charge at the moment the train passed, without endangering the life of a shore party. 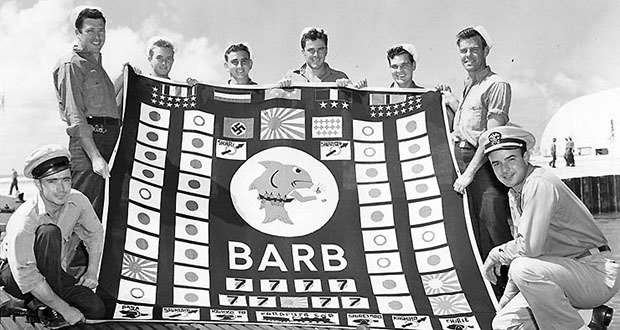 Cruising slowly beneath the surface to evade the enemy plane now circling overhead, the monotony is broken with an exciting new idea. Instead of having a crewman on shore to trigger explosives to blow both rail and a passing train, why not let the train blow itself up. Crewman Billy Hatfield was excitedly explaining how he had cracked nuts on the railroad tracks as a kid, placing the nuts between two ties so the sagging of the rail under the weight of a train would break them open. “Just like cracking walnuts,” he explained. “To complete the circuit (detonating the 55-pound charge) we hook in a micro switch between two ties. We don’t set it off, the train does.” Not only did Hatfield have the plan, he wanted to be part of the volunteer shore party.

Fluckey established his own criteria for the volunteer party: No married men would be included, except for Hatfield. The party would include members from each department. The opportunity would be split between regular Navy and Navy Reserve sailors. At least half of the men had to have been Boy Scouts, experienced in how to handle themselves in medical emergencies and in the woods. FINALLY, Lucky Fluckey would lead the saboteurs himself.

When the names of the 8 selected sailors was announced it was greeted with a mixture of excitement and disappointment. Among the disappointed was Commander Fluckey who surrendered his opportunity at the insistence of his officers that “as commander he belonged with the Barb,” coupled with the threat from one that “I swear I’ll send a message to ComSubPac if you attempt this (joining the shore party himself).” Even a Japanese POW being held on the Barb wanted to go, promising not to try to escape. (The idea of blowing a train up with a sub…well even the Japanese POW thought it was a lark).

The Barb had crept within 950 yards of the shoreline. If it was somehow seen from the shore it would probably be mistaken for a schooner or Japanese patrol boat. No one would suspect an American submarine so close to shore or in such shallow water. Slowly the small boats were lowered to the water and the 8 saboteurs began paddling toward the enemy beach. Twenty-five minutes later they pulled the boats ashore and walked on the surface of the Japanese homeland.

Three men were posted as guards, John Markuson assigned to examine a nearby water tower. The Barb’s auxiliary man climbed the ladder, then stopped in shock as he realized it was an enemy lookout tower, an OCCUPIED tower. Fortunately the Japanese sentry was peacefully sleeping and Markuson was able to quietly withdraw and warn his raiding party.

The news from Markuson caused the men digging the placement for the explosive charge to continue their work more slowly and quietly. Twenty minutes later the holes had been dug and the explosives and batteries hidden beneath fresh soil. During planning for the mission the saboteurs had been told that, with the explosives in place, all would retreat a safe distance while Hatfield made the final connection. If the sailor who had once cracked walnuts on the railroad tracks slipped during this final, dangerous procedure, his would be the only life lost. The men disobeyed this order completely, with every saboteur watching over his shoulder as he made the final connections. They had come so far, under such conditions that everyone wanted to make sure the job was done right. 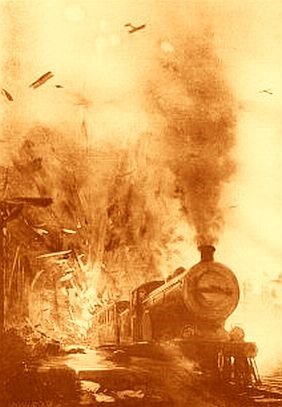 The two boats carrying his saboteurs were only halfway back to the Barb when the sub’s machine gunner yelled, “Captain! A train’s coming up the tracks!” The Commander grabbed a megaphone and yelled through the night, “Paddle like the devil!”, knowing full well that they wouldn’t reach the Barb before the train hit the micro switch. The darkness was shattered by brilliant light and the roar of the explosion. The boiler of the locomotive blew, shattered pieces of the engine blowing hundreds feet into the air. Behind it the ammunition cars began to accordion into each other, bursting into flame and adding to the magnificent fireworks display. Five minutes later the saboteurs were lifted to the deck by their exuberant comrades as the Barb turned to slip back to safer waters. Moving at only two knots, it would be a while before the Barb was into waters deep enough to allow it to submerge.

The Barb had “sunk” a Japanese train!

The story of the saboteurs of the U.S.S. Barb is one of those unique, little known stories of World War II. It becomes increasingly important when one realizes that the 8 sailors who blew up the train at near Kashiho, Japan conducted the only ground combat operation on the Japanese “homeland” of World War II.

When the Barb returned to Hawaii, a single locomotive was painted on her conning tower, in honor of her achievement. She became the only submarine in history to sink a land vehicle in combat.

42 Funeral and Burial Customs from Around the World (Infographic)