So one of our readers asked us this question the other day: Did everyone bite their nails before nail clippers were invented?

It is free to bite your nails and, more to the point, quite standard for nails to break off in the course of even light manual labor. So in some premodern societies where status is less based on conspicuous consumption than today, one of the things archaeologists have observed is that nail-grooming actually becomes a status symbol!

Eamon Kelly makes this case for early Ireland especially off the “bog bodies” found in Ireland and a few other places. Clonycavan Man, who was (archaeologists argue) sacrificed in the 300s, was found with nicely manicured nails and a sort of hair pomade made of materials probably imported from northeastern-ish Iberia. (Tollund Man and Graubelle Man, from Denmark, are two others frequently cited as having manicured fingernails.)

It’s not unusual for later Bronze Age/early Iron Age northern European bodies to be buried with “hygiene kits”–razors for men, tweezers, and a sort of mortar-and-pestle set that may have been used to grind powder for makeup. Fair warning, I’m WAY out of my normal area here. But to my knowledge, we don’t see specific tools used for nail trimming. Instead, there are nail cleaners. 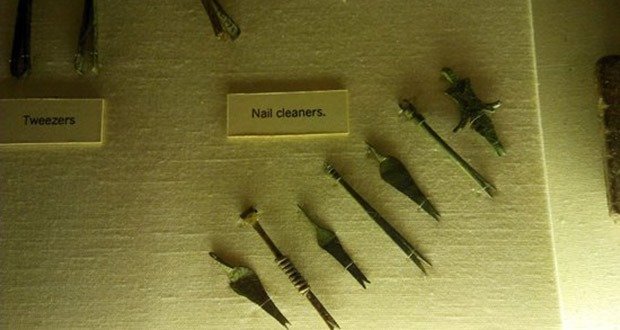 These are particularly prevalent in grave sites in Britain: elite graves from the pre-Roman period, and then becoming more common during the formal Roman presence. They’re found at all sorts of sites–villages, larger towns, military camps, Roman villas, suggesting a distribution across social strata. I should note, following Hella Eckhardt, that we can’t be sure these are specifically nail cleaners. However, in British sites’ hygiene kits they replace the type of pick more typically found in Gaul and have a tip type that seems more suited to be a dedicated nail cleaner versus the other major possibility, a tooth pick.

As far as nail cutters go, there are a few options. First, scissors in the sense of “two blades that slide past each other” are quite ancient. In ancient Rome proper, where nail hygiene was a defining element of style, barbers used a tool called a cultellum tonsorium (literally, “barber’s little knife”) to cut customers’ nails. The tradition of using knives persisted in the Latin Middle Ages. I have read that archaeologists have found what they suspect are specialized nail-cutting tools in Romano-British grave sites, but I’ve not seen a clear description of how they functioned.

AskUs: How does Alzheimer's kill a person?