So one of our readers asked us this question the other day: Did paper airplanes exist before the Wright Brothers?

Might paper kamikaze-bomber-drones suffice as an answer? If so, we can date description of this military-grade paper airplane as far back as China’s Ming Dynasty (ca. 14th century), and specifically pertaining to one of the 7 Military Classics: the Huolongjing (The Fire Dragon Manual).

Taking a page from the Mongol Hordes, who had use actual fire birds -as in setting cages of birds on fire and then releasing them to fly into cities (though far more likely the birds had bags of burning embers tied about their necks or legs, which would have been more effective in not, y’know, not immediately roasting the ordinance to death), the Ming Dynasty engineer thought up a method of armament deployment that didn’t depend wholly on the scatter patterns of animals being burnt alive. 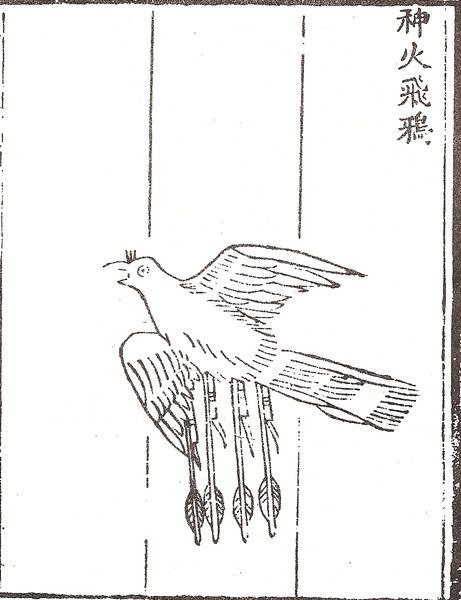 Instead, the Ming Chinese came up with the shen huo fei ya, meaning “Magic Flying Fire Crow” (pictured above).

“The body [of the bird] is made of [fine] bamboo laths forming an elongated basketwork, in size and shape like a chicken, weight over a catty [0.6 kg]. It has paper glued over to strengthen it, and it is filled with explosive gunpowder. All is sealed up using more paper, with head and tail fixed on before and behind, and the two wings mailed firmly on both sides, so that it looks like a flying crown.

Under each wing there are two [slanting] rockets. The fourfold fuse, connected with the rockets [and about a foot long], is put through a hole drilled on the back. When in use, this is lit first.

The bird flies away more than 1000 ft, and when it eventually falls to the ground, the explosive gunpowder in the cavity of the bird is lit, and the flash can be seen miles away. This weapon is used against enemy encampments to burn them, but also at sea to set ships aflame. It should never fail to bring victory.” 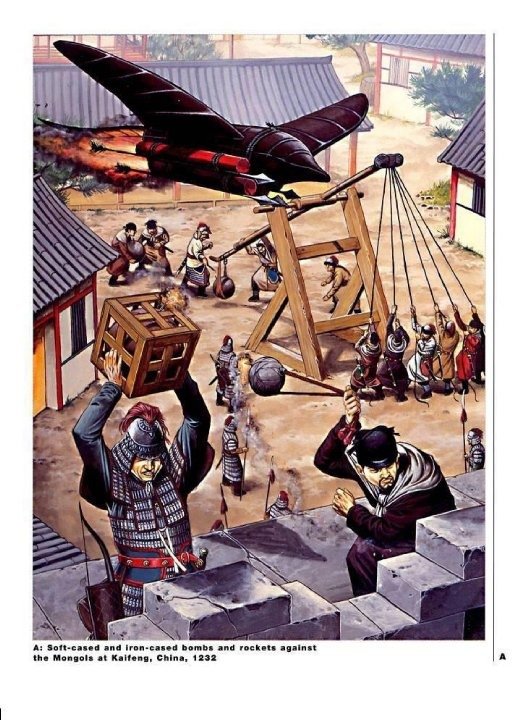 And there there was the Hellfire Missile of its day, the Fei Gong Chi Zei Chen Tian Lei Pao – rather awkwardly translated a lot of the time as the “Flying enemy-pounding thunder-crash bomb” – but we might somewhat more poetically (and awesomely) call just the Thunderbird Missile.

It was, as its name might imply less of a “paper airplane” than a rocket with some cursory paper wings attached for stability. From Science and Civilization in China, vol. 5: Chemistry and Chemical:

“There is another winged rocket-bomb, or rather grenade, in the Wu Pei Chih, the ‘free-flying enemy-pounding thunder-crash bomb.’ A rocket-tube is contrived within the body of it, and when the wind is favorable the fuse is lit, whereupon it flies over to the enemy. Then the rocket-composition is nearly burnt out, the charge automatically ignited, releasing poisonous and irritating smoke as well as water calthrops the thorns of which are tipped with tiger-poison. The whole thing is no more than 3.5 in. in diameter, made of dozens of layers of oiled paper, but on each side it has artificial wind-borne wings which will take it, in suitable conditions, right over a city wall.”

AskUs: Why was WWI considered "inevitable"?

AskUs: Why can’t humans see UV or IR light, while other animals can?