So one of our readers asked us this question the other day, Ancient Babylon: Did they really practice public deflowering of virgins via ritualized sex in the name of some goddess? Both Herodotus and the Old Testament describe how young women in Babylon and other ME regions were brought to a temple when they were old enough and would prostitute themselves for a day. Is there any truth to this practice, or is it just embellishment by Herodotus and anti-Babylonian propaganda by the ancient Hebrews?

As you describe it – that is, that as a rule young women would lose their virginity as part of a ritual process – this definitely did not take place. The idea that ‘temple prostitutes’ existed (either for a day or as a profession) is almost entirely reliant on Herodotus’ account and no explicit literary evidence from the Ancient Near East exists to back him up.1

Looking at the evidence for sexual activity (including prostitution) that took place in and around temples a little more evidence is available, but it is still very scarce compared to descriptions of other professions related to ritual practice. Lerner suggests that for deities connected explicitly with fertility and procreation (such as Inanna/Ishtar), offering prostitution would have been seen as divinely appropriate, and perhaps seen as separate from ‘commercial’ prostitution.2 Westenholz adds that, if sexual activity was carried out within a temple context – say, to bestow a divine blessing on a man trying to conceive with his wife – it should not rightly be called ‘prostitution’ since it was carried out within strict boundaries of conduct and explicitly with a ritual purpose.3 Commercial prostitution, on the other hand, would be outside this controlled sphere, and Westenholz suggests that the generally blurred lines between sacred and secular account for the embellished descriptions of sexual activity in or around temples as we find it in Herodotus, or the allusions to it in the Hebrew Bible. Whether this is a particularly useful semantic distinction is up for debate: if we define prostitution as ‘the act of providing sex in exchange for payment’ it is quite possible that sexual activity associated with temples in Mesopotamia might qualify; however, we simply don’t have enough evidence to determine whether this was the case. 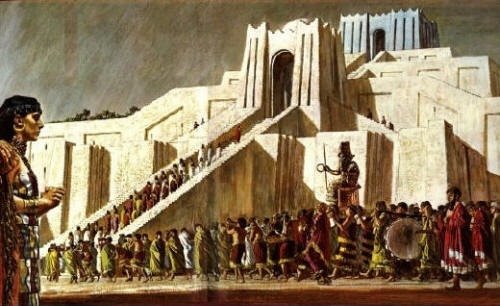 Some kind of ritual sex seems to have taken place in the late-3rd to early 2nd millennium BCE during the Akitu festival (the Babylonian and Assyrian new year celebration), involving the king and a priestess (perhaps even the high priestess), to symbolize the union of Dumuzi/Duzu and Inanna/Ishtar that bestowed fertility.3 Inanna/Ishtar furthermore served as the patron deity of prostitutes – several words for prostitute are recorded in Old Babylonian legal texts – and it is possible that one kind of prostitute was employed directly by the temple for commercial (but not ritual) purposes.4

Other kinds of activities associated with procreation were certainly and explicitly connected with the temple and with ritual – importantly, childbirth and midwifery. The word qadishtu ‘holy woman’ (describing a type of priestess performing these duties) seems to underlie the Hebrew word (qedesha) that is used in Hosea 4 and Genesis 38, the two main passages previously thought to allude to sacred prostitution. However, according to the available evidence, the qadishtu did not provide sexual services but rather was a kind of temple-employed midwife.

To sum up: there seems to be some evidence for prostitution in association with temples, but only explicitly for commercial purposes. Whatever sexual activity took place would be exclusively ritual (in the case of the Akitu festival), not understood as prostitution quite in the way we usually see it. The kinds of embellishments found in the Hebrew Bible and Herodotus are poor reflections of actual practice, and this is clear even with the relatively restricted evidence we have for it.

1 Oden, The Bible Without Theology, University of Illinois Press, 1987.

2 Lerner, ‘The Origin of Prostitution in Ancient Mesopotamia’ in Signs 11, 1986.

4 Gruber, ‘Hebrew Qedesha and her Canaanite and Akkadian Cognates’ in Ugarit-Forschungen 18, 1986.

AskUs: How did USSR prevent people from leaving East Germany to the West?

AskUs: Did everyone bite their nails before nail clippers were invented?