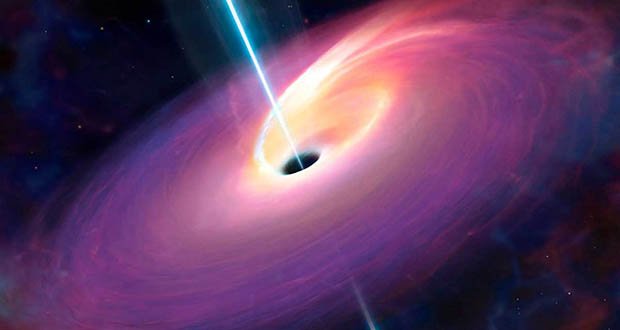 So one of our reader asked us this question the other day: Explain to me the theory that states black holes can be used for time travel

Get ready for a crash course in advance astrophysics.

First you have to know that space isn’t a non-existent thing but a thing in itself. We call it space-time. So when something rests on space-time it distorts. Imagine a bed sheet. If i stretch it out and put a bowling ball on it the bed sheet warps under the weight of the ball. This is how space-time works, but it isn’t like a bed sheet, its existence is in more than 3 dimensions so the human mind can’t conceive of the true shape of space-time. So the objects will distort space and cause it to have bumps and grooves all over the place. The more massive the object the more massive the bump or depression. A black hole is an object that is so heavy that the bottom of the dip is infinitely deep, so it takes the relative description of a hole.

Now lets talk about light. Light travels at the universal constant. That constant is how fast two points can “talk” to each other. Light wont slow down or speed up from that constant, it always travels that distance at the same rate. Other things that travel that fast would be gravitational waves, and any other mass-less object. Light also travels along space, so it moves with the bumps and hills in space-time.

Now gravity! So when an object comes close to another object in space. The object approaches it travels in a straight line until it reaches the next object’s space-time distortion. So imagine rolling a marble past the bowling ball. The marble always travels straight. When it hits the depression of the bed sheet the marble “turns.” That turning comes from the distortion, the marble is still traveling straight but the bed sheet is turning underneath it causing the marble to turn. The marble will continue to orbit until it leaves the “gravity well” or until it hits the bowling ball.

Black holes only magnify this effect because of the massive amount of distortion it puts onto space, so the amount of time dilation is noticeable to humans. Oh and speed messes with time as well. The closer to the speed of light you get, the slower time travels in order to make sure you don’t pass the universal constant. So if you travel really fast along the outer edge of an event horizon time will dilate so much that thousands of years will go by in no time from your perspective.

AskUs: How do interpreters hear the next line while interpreting what was just said?

AskUs: How do blisters form and what is the purpose of the liquid inside the blister?

July 23, 2016
Latest Posts
Subscribe to Blog via Email
Did you know?
Loading...
Facts of the Day
Registration is disabled.