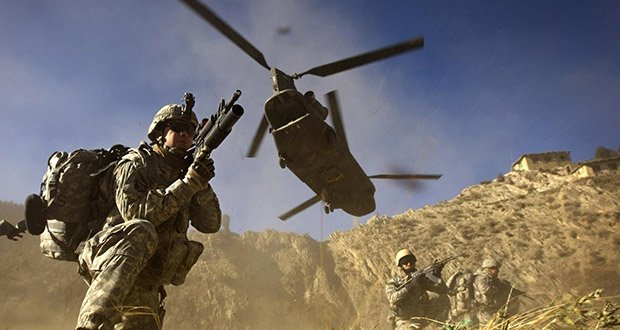 So one of our readers asked us this question the other days: How are big wars “controlled” nowadays?  So we’ve all played or at least know about C&C, Red Alert, Warcraft, Starcraft etc. I select a group of units and tell them where to go. But how does that process look like in real life, who sets up who should be where and when to attack where and so on? What does that process look like?

So there’s a chain of command in simple terms:

In reality, its a massive chain. The equivalent of a field marshal in the United States would be a five-star general, which we haven’t had since WW2.

The US Military operates under a brilliant piece of legislation passed in the 80s called Goldwater Nichols. GN completely stream lined the chain of command and arguably solved a problem dating back to the Romans: getting the Army and Navy to talk to each other.

Under GN, each branch of the US Military (Army, Navy, Air Force, and Marines) became known as a “Force Provider”. Their job is to ‘recruit, train and equip; military forces. Prior to GN each branch also had operational responsibility too. This worked (kinda) fine for big wars like WW2, but as wars have gotten smaller and more integrated (meaning the Sergeant in the tank needs to be able to talk directly with the pilot in the F-16 overhead), the old arrangement wasn’t working. The most high profile example of this was the attempted rescue of the hostages in Iran where each branch blamed the other for failure. Post GN, the head of each branch (who’s also a member of the Joint Chiefs) lost command authority over their forces. Individually each Service Chief is responsible for administration, and as a body the Joint Chiefs are an advisory board to the President and Secretary of Defense. GN also enhanced the power of the Chairman of the Joint Chiefs to oversee it.

GN’s biggest change was the creation of a streamlined and separate operational chain of command. Reporting directly to the Secretary of Defense are 4 star Generals and Admirals who are Combatant Commanders. The responsibility of each CoCom is governed by a document published by the Defense Department called the Unified Command Plan. The UCP and the Commands it creates aren’t new to GN, but they each reported to a different Joint Chief and were heavily biased towards one branch (good luck being an Army unit assigned to the Navy controlled Pacific Command before GN). In addition to making each CoCom report directly to the Secretary of Defense, GN also required that the Officers given Command of a CoCom have a resume filled with Joint assignments. If you’re an Army General who’s never served on a Joint Staff, led a Joint Task Force, or been trained in Joint Operations, you won’t be allowed to command a CoCom. The goal is to create CoComs that are neutral in terms of who Commands them (an Admiral in charge of a ground war in Europe wouldn’t blink an eye today, pre GN though it be unthinkable).

Today there are 9 CoComs, 3 functional and 6 regional. The Functional CoComs are US Transportation Command (moving people and stuff from one part of the globe to the other by air, sea and land), US Strategic Command (nukes, cyberspace, and space assets), and US Special Operation Command (which acts more like a service branch, it administers everything from Army Rangers to Navy Seals making sure they all play nicely). The 6 regional CoComs are US North Command (homeland defense), Southern Command (South America), US European Command (doubles as NATO Supreme Allied Commander), US Africa Command, US Pacific Command (biggest in terms of Area of Responsibility), and US Central Command (the Middle East). Each branch of the military is responsible for providing each CoCom with a Service Component Command. US Central Command’s service components are the 3rd Army, 9th Air Force, 5th Fleet, Marine Forces Central, and Special Operations Command Central. Each Service Component Command can, if needed, serve as the foundation for a Joint Task Force (US Africa Command’s 6th Fleet was made into a Joint Task Force to bomb Libya), or to service as a Joint Functional Component Command. 3rd Army is the Joint Land Component Commander, leading all Army and Marine ground forces. 9th Air Force is the Joint Air Component Commander controlling (kinda) all air units, whether it be Air Force, Navy, or Marine squadrons. 5th Fleet is the Joint Maritime Component Commander responsible for all Navy, seaborne Marines, and Coast Guard units. The Joint Functional Commanders report to the Joint Force Commander, who’s either a Joint Task Force Commander under the CoCom for a specific operation (bombing ISIS), or the CoCom himself. Despite cool names like 3rd Army, most CoComs don’t have permanent forces assigned to them, they are Headquarters units able to command massive forces, if needed. If 5th Fleet needs 5 Carrier Strike Groups, it’s Central Command’s job to request it, the Secretary of Defense’s job to approve it (under the advice of the Joint Chiefs and President’s consent), and the Navy’s job to have forces ready to send.

AskUs: What actually happens that can cause women to die during childbirth?

AskUs: Why can't most freshwater fish survive in saltwater and vice-versa?

August 6, 2016
Latest Posts
Subscribe to Blog via Email
Did you know?
Loading...
Facts of the Day
Registration is disabled.