So one of our readers asked us this question the other day: How did people in the Middle Ages and earlier deal with Down Syndrome and autism?

Medieval western Europe certainly did not have the medical categories we perceive today. Kanner and Asperger’s tandem research on what we now call autism, for example, was done in the 1930s and 40s. What medieval people did have was observation: an awareness that certain people acted differently. Whereas today cognitive and psychiatric conditions are diagnosed by medical professionals (or, I suppose, by Dr. Google), in the Middle Ages it would have been a process of social recognition. At what point did a person’s difference render it difficult or impossible for them to fit into normal society?

For the most part, we know, people whose disabilities rendered them unable to function on their own were the responsibility of their families. We have a few snatches of stories from saints’ miracle collections where the healing miracle gives us one or two sentences about the previous condition. These stories often involve siblings transporting the person to the shrine, or a mother describing how she used to help her adult child get dressed every day.

Only at the very end of the Middle Ages, the 15th century, do we see the first formal establishment of institutions dedicated to people with cognitive/mental disabilities in the West. It’s possible that there would have been some similarly disabled people residing in earlier monastic hospitals along with the indigent and indigent (physically) sick, but not on a focused basis. To be sure, these 15C institutions were not hospitals or sanitoria in the modern sense, with a goal of treatment. It was just a place for them to live and maybe learn a little bit about God.

We learn a little more about the roles of the cognitively impaired in medieval society through law codes and religious sources. Already in late antiquity, Roman civil law distinguished crimes committed by someone unwell, that is, “insane”–with fuller descriptions making it clear that these laws typically applied to criminals with cognitive impairment, not the temporary insanity we all know from Law & Order. 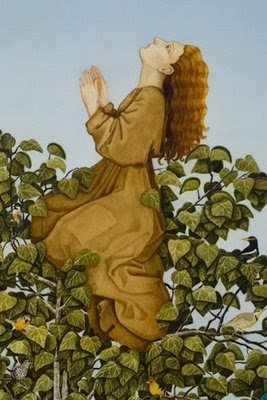 From the high Middle Ages, it used to be standard scholarly practice to assume mental disability was interpreted as demonic possession. We now know that’s far from a blanket assertion. The 13th century holy woman Christina Mirabilis (Christina the Astonishing), for example, is sometimes pointed to as a (non-canonized) saint whose hagiography pretty clearly depicts her as cognitively different than her peers, even after accounting for medieval hagiographic topoi. (The part where she climbs trees and chirps like a bird, for example.) In other cases, yes, mental illness might be perceived as a demonic intrusion, especially if it developed later in life rather than being present from birth. There are some cases of nuns described in a manner reminiscent of various mental illnesses who are denied the Eucharist because of it!

But heaven and hell certainly weren’t the only options–or even, oddly enough, the primary concern. Indeed, where we see authorities intervening in cognitive health isn’t to perform exorcisms and certainly not to force recantation of heresy. No, it’s to regulate ownership and inheritance of property!

In late medieval into early modern England, for example, “idiots” and “lunatics” (those are the terms) were designated wards of the king–similar to minor children who were considered unfit to make legal decisions for themselves. This wasn’t to ensure they were cared for; this gave the crown control over any property they owned. As a result, we have some really fascinating records of court cases where people sue to have themselves ruled “not an idiot”. More frequently and sadly, though, we see family members in court on the cognitively impaired person’s behalf, basically using them as a pawn in order to maintain control of property within one lineage or seize it for their spouse’s extended family.

AskUs: How prevalent was Homelessness/Poverty in the Soviet Union?