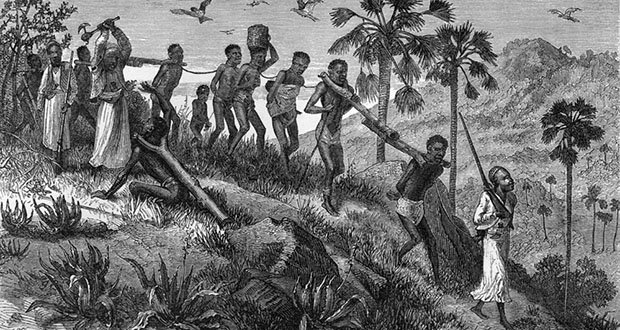 So one of our readers asked us this question the other day: If I lived in western Africa during the height of the Atlantic slave trade, how likely is it that someone I know was captured and shipped to the Americas? Was there a drastic change in culture as a result of the massive loss in population? What societal impact was there? My textbooks tend to focus mostly on the (awful) transit to the Americas and the equally horrific experience of slaves once they got there. It kind of skims over the people left behind. But there has to have been a huge effect, right? You can’t lose that many people in your society without some drastic changes to your society and your culture.

The Atlantic slave trade had a catastrophic and permanent effect on western and central Africa. One of the common misconceptions is that slave trade already existed in Africa, so the trans-Atlantic trade couldn’t have had significant negative effects. That’s entirely wrong. To give an analogy, it’s like comparing the quilts your grandmother sells on Etsy with the product of Pendleton Woolen Mills. They operate on entirely different scales.

One of the things you’ll read again and again when you study the history of the trans-Atlantic slave trade is the idea that it was a “transformative event.” The transformation thesis says African slavery over the past millennium (this includes the Islamic slave trade) has altered African history more than any other event.

Just look at the scale of the trans-Atlantic trade: 5.5 million slaves to Brazil, 6 million to the Caribbean and Guyanese colonies, half a million to the North American mainland. If you imagine a West African population of 50 million in the 18th century, this is an extraordinary fraction of the region’s people, one of the largest mass migrations in world history.

As Paul Lovejoy explicitly stated in 1989: “The European slave trade across the Atlantic marked a radical break in the history of Africa, most especially because it was a major influence in transforming African society.”

One of the books I have on my shelf is a collection of essays entitled The Atlantic Slave Trade: Effects on Economies, Societies, and Peoples in Africa, the Americas, and Europe. The first four essays in the book are devoted to the effects of the slave trade on African society. It’s an older book (the essays are from a 1988 conference) but they’re still reliable, I believe.

The first of the four essays, by Martin Klein, discusses the impact of the trade on the societies of the Western Sudan. He discusses how theorists believe the slave trade “contributed to a quest for arms” in western Africa. Not only did people have an economic interest to collect slaves, they also were determined to defend themselves from others who might enslave them. Focus on warfare encouraged famine and starvation, disrupted trade routes and led to a more impoverished life.

The constant need for more slaves meant warfare was a permanent fact of life. If you believe Clausewitz and his theory that warfare is simply an extension of politics, and that wars end when the political situation is resolved, slavery upends this theory. It creates an atmosphere and need for permanent warfare.

Sylvane Diouf, in a collection of essays called Fighting the Slave Trade: West African Strategies discusses how Africans attempted (sometimes successfully) to resist slavers and their lackeys. What historians find time and time again stands out in the historical record is the incredibly vibrant culture of defiance and self-determination exhibited by Africans taken into slavery, and later their descendants. The problem is that even successful resistance takes a toll.

Slavery hugely imbalanced the population mix in western Africa. Because slavers wanted male slaves more than female ones, the slave trade encouraged polygamous relationships and discouraged monogamy because there were many more women than men. Slavery spread disease, as populations mixed in warfare and along the coast. Slavery spread starvation, as slave-raiding parties burned granaries, scattered farmers and torched farms. Slavery disrupted trade, as it crowded out the non-slave trade and discouraged conventional exchanges in things like cotton.

For all the problems slavery caused in the Americas, for all the horrors it inflicted on individuals, its effects on states and nations were just as deleterious.

AskUs: Why are fiber-optic connections faster? Don't electrical signals move at the speed of light?

AskUs: Did the Roman Empire have Snack Foods?