So one of our readers asked us this question the other day: During the Cold War, how did the USSR prevent people from leaving East Germany to the West? I know in Berlin they had the Wall and checkpoints, but the East/West border was much larger and harder to defend. Also, how did Western allies get to Berlin as it was right in the middle of “enemy” territory. I know about the Berlin Airlift, but that was only a short amount of time, what about the next 40 years?

Let me first answer a simple question many people have What was the purpose of West Berlin? Why have a city (or part of a city) deep within unfriendly territory?

It was something that evolved out of a different political environment during WW2. The Soviets and West were friendly during the war when the Yalta and Potsdam agreements were made that divided the city to split the burden of occupation and the prestige of occupying Germany’s capital. However as the Cold War started and the West and Soviets fell out and the symbol of West Berlin came to be a line in the sand for the resistance to Communism. Giving up Berlin for the Allies meant losing out the Soviets, which is exactly what the Soviets would see it as, while for the West Germans retaining part of their former capital was a prestige issue.

To answer your question, how difficult it was to cross East and West Germany?, it actually was very hard. No one was allowed to even come close to the border. People living near it were relocated. There were only a few rail lines and highways connecting West Germany with West Berlin. Of course some people made it across, mostly via the Baltic sea or the less ironclad border between Austria and Hungary. But it was very hard to pull off successfully.

There were special border crossings for West German people, so they could then drive through the German Democratic Republic(East Germany) by car on special routes (it was not allowed to leave these streets and you were only allowed to stop for a short rest, communicating with East Germans was forbidden by the GDR, Stasi was constantly spying on everybody; entry stamps with time into the entry visa had to be shown on leaving the GDR to make sure the travel had been done without major breaks). 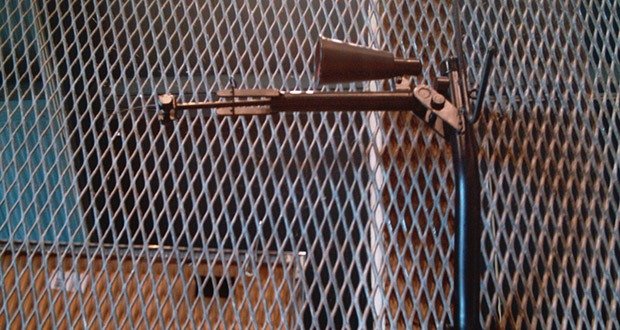 On the intra-German border, there was a 5km ‘forbidden zone’. Anyone who was in this zone, had to have a special permit. Without one, one would immediately be arrested on suspicion of “Unauthorized departure from the Republic.” The border itself was sealed off with a system of mines (there were no mines on the West-Berlin border), electric fences (with automatic shooting devices[pictured above]) and watch towers every few hundred meters. The automatic shooting devices were a very nasty piece of technology which the West Germany objected to all the time. These devices were very deadly, and at times they even armed the devices with ‘dum-dum’ bullets. The device itself would be attached to one of the many border fences. When the device detected any movement, it would fire a short burst of bullets. This sound would alert the closest border guards and they would be there within minutes.

In the East Germany there was a mandatory military service for all men from the age of 18. It could be two or three years. Serving in the Border Unit (Grenztruppen der DDR) was one way of doing the military service. It was also the most boring way since much did not happen at the border.

German airlines were not allowed to fly to West Berlin, so Pan Am, British Airways and Air France covered most of the flights from West Germany to West Berlin (also airlines like Air Berlin USA (with HQ in Miami – now Air Berlin, second largest airline in Germany) and EuroBerlin France (joint-venture from Air France owning 51% and Lufthansa 49%) were founded. Trains were going without any stops (in the east) directly from and to West Berlin, the DR (East German railways) operated these trains within the GDR (West German cars but eastern locomotives) with highest priority to make sure there are zero stops within the GDR, of course all this happened with extensive border checks on the eastern side prior entering and leaving (plus the constant spying of Stasi members).