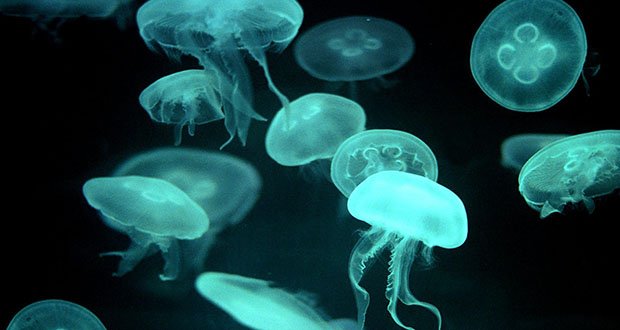 So one of our readers asked us this question the other day: How do jellyfish swim and eat if they have no brain or no blood?

DNA organizes their cells same as it does yours. The rest is mostly reflexes and some simple sensory data they detect with their tentacles.

When the doctor tests your reflexes by tapping your knee the signal that causes your leg to twitch actually synapses in your spinal cord. Your brain doesn’t play any part in that process. That’s roughly what is at work in jellyfish. They have a network of nerves that, although it is de-centralized, has simple reflexive process programmed in and that’s all they need.

They can detect when they’ve encountered an obstacle and change their shape to be more or less buoyant to try and move around it. They can detect saltiness and will avoid freshwater as best as they are able. They can sense light, their tentacles are programmed to basically try and eat anything they can grab, and they can undulate their body for very simple locomotion.

They’re 98% water and the parts that aren’t are very fragile indeed. If they get caught in a rough tide and smashed up against the rocks they’re done for, in some cases rough surf alone can rip them apart. Most of the jellies you see in aquariums are grown from larva or polyps because catching and transporting them as adults without damaging them is very difficult.

I’m sure they have some other chemical-sensing organs in their skin for detecting the best time to reproduce, but other than that… that’s about all there is to them.

AskUs: In loud environments, do sound canceling headphones damage the ear or function as hearing protection?

August 11, 2016
Latest Posts
Subscribe to Blog via Email
Did you know?
Loading...
Facts of the Day
Registration is disabled.