So one of our readers asked us this question the other day: How do scientists achieve extremely low temperatures? From my understanding, refrigeration works by having a special gas inside a pipe that gets compressed, so when it’s compressed it heats up, and while it’s compressed it’s cooled down, so that when it expands again it will become colder than it was originally. How are extremely low temperatures achieved then? By simply using a larger amount of gas, better conductors and insulators?

If you want to go to really, really low temperatures, you usually have to do it in multiple stages. To take an extreme example, the record for the lowest temperature achieved in a lab belongs to a group in Finland who cooled down a piece of rhodium metal to 100pK. To realize how cold that is, that is 100*10-12K or just 0.0000000001 degrees above the absolute zero!

For practical reasons you usually can’t go from room temperature to extremely low temperatures in one step. Instead, you use a ladder of techniques to step your way down. In most cases, you will begin at early stages by simply pumping a cold gas (such as nitrogen or helium) to quickly cool the sample down (to 77K or 4K in this case). Next you use a second stage, which may be similar to your refrigerator at home, where you allow the expansion of a gas to suck out the heat from a system. Finally the last stage is usually something fancier, including a variety of magnetic refrigeration techniques. 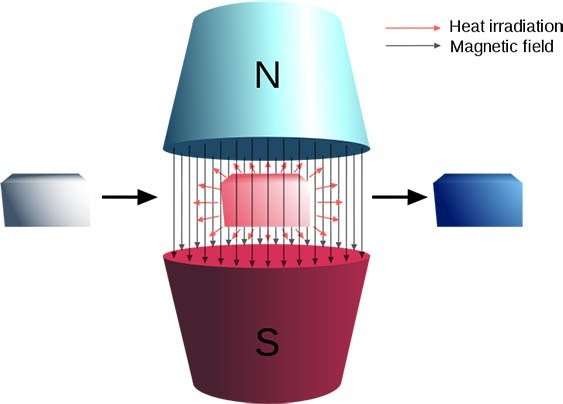 For example, the Finns I mentioned above used something called “nuclear demagnetization” to achieve this effect. While that name sounds complicated, in reality the scheme looks something like the above diagram. The basic idea is that 1) you put a chunk of metal in a magnetic field, which makes the spins in the metal align, and which heats up the material. 2) You allow the heat to dissipate by transferring it to a coolant. 3) You separate the metal and coolant and the spins reshuffle again, absorbing the thermal energy in the process so you end up with something colder than what you started out with.