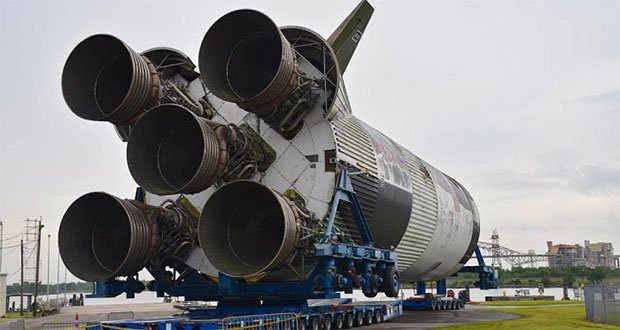 So one of our readers asked us this question the other day: The Saturn V Rocket is called the most powerful engine in history, with 7.6 million pounds of thrust. How can this number be converted into, say, horsepower or megawatts? What can we compare the power of the rocket to?

Another way to put it: How much mass could it accelerate from 0-60 mph in 2.5 seconds like a Porsche or Ferrari?

Pounds of thrust is a force, so you can’t convert it into horsepower or watts which are both units of power.

Using the old v = a*t equation, and plugging in 60mph as the final speed using that acceleration, we learn that the time to get from 0-60 is 1.4 milliseconds.

Given that a blink of an eye is literally ~200 milliseconds, that’s almost too fast to comprehend for me. So let’s turn it around and ask how much mass could go from 0-60 in the 2.5 seconds of a very high end sports car? That becomes a ‘solve for x’ type equation that you learned about in algebra, and the answer is 3.2 million kg.

So what is 3.2 million kg? Let’s think about a loaded train car. How much do those weigh? The Internet seems to think a loaded train car is about 100 tons, so going with that, a Saturn V could accelerate a ~35-car fully loaded freight train from 0-60 in 2.5 seconds. That would be truly amazing and terrifying to watch.

These numbers are assuming your car magically pushes out this thrust without attaching the mass of the entire rocket to the car. This was just a fun thought experiment to put the amount of force in context to something you’re more familiar with, not saying it’s actually possible.

AskUs: If 3 supernovas occur in Milkyway every century, why haven’t we observed any since the last one in 1604?

AskUs: Ancient Greek men thought the ideal male body possessed a small penis. Do we have any idea what Greek women thought?