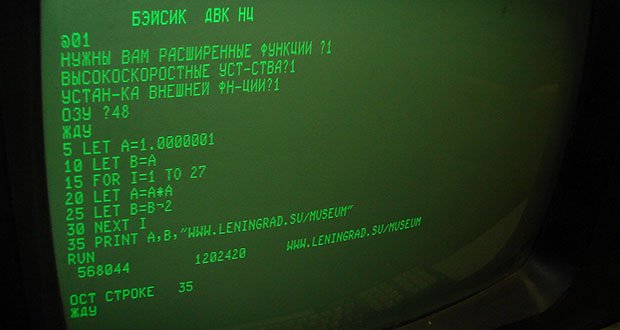 So one of our readers asked us this question the other day: How powerful were Soviet computers? What programming languages did they use?

From 1945 to the late-1960s, pretty good; not very powerful in the 1970s; completely obsolete by the 1980s. The Soviet industry developed at about the same pace as the West until about 1969, which is when the Soviet government terminated independent Soviet programs in favor of attempting to copy/pirate IBM.

As of the late-1980s, Eastern bloc computers were at least 10-20 years behind the West (and Japan). In East Germany for instance, university labs would only have “one 8-bit Sinclair Spectrum with 64K of RAM for every 10 to 15 scientists.” This computer was released in the UK in 1982 and only sold for £125, which obviously placed it within the range of the home computer market. Eastern bloc scientists, more or less, only had a few hours access per week to the same computing power as an average British consumer.

At the top-tier of computer development, Soviet scientists in the mid-1980s were developing supercomputers capable of 100 to 10,000 megaflops. In contrast, Americans had developed machines capable of 1.9 gigaflops by 1985. The STAR-100, a machine developed by Control Data Corporation (Minnesota, USA), hit 100 megaflops in the early-1970s.

Tracing languages is a bit outside of my knowledge. A journalist in the late-1980s visited a school in Novosibirsk, Russia, and reported that students learned BASIC, ALGOL, FORTRAN, and PASCAL, although the latter was only theoretical as no computers in the school could handle it. He also reported his portable Toshiba 1100 Plus PC was more powerful than the single computer shared by “300 students in Novosibirsk.” Granted, these anecdotes are likely exaggerated by the politics of the time, but surely some there are some truths to the statements. Also, the Soviet consumer computer industry was virtually non-existent compared to western Europe, America, and Japan by this point.

AskUs: How is it that we have 7 days in a week?