So one of our readers asked us this question the other day: How the Great Barrier Reef is now considered “dead” and what factors lead to it? 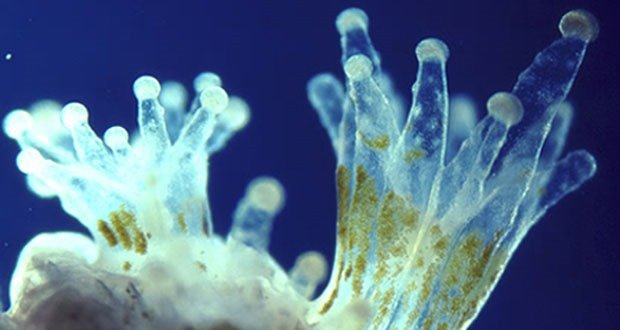 The corals are bleaching. Most corals (but not all) have a symbiotic partnership with a type of chromalveolata called zooxanthellae, which lives in the tissues of the coral. The coral protects the algae with its stinging cells and by generally being poisonous as hell, and the algae shares food that it photosynthesizes with the coral. Corals are animals, though, so they can also just eat stuff, mostly filter feeding (some corals do not have zooxanthellae algae, they just filter feed) 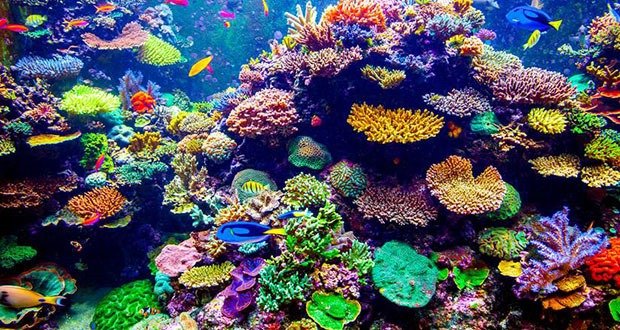 When stressed, like for instance when the water gets too warm, the corals flush all their zooxanthellae out of their tissue. Scientists are not entirely sure why they do this. The zooxanthellae is where corals get all the cartoonishly amazing colors you see. The zooxanthellae can also be killed by toxic substances in the water that don’t kill the coral, leaving them without their algae. Just to give you an idea, here’s a completely realistic anemone, and here’s a bleached anemone with no zooxanthellae. The latter anemone is still alive, but it may not be for long. 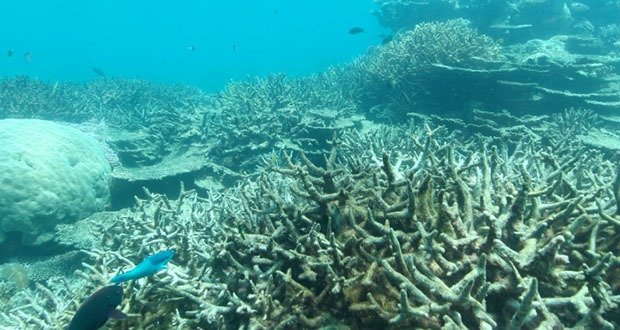 When a coral bleaches, it’s possible that it can absorb algae from the environment and start over. However, that’s not usually very likely. Usually, once a coral bleaches, it slowly dies. And once the living tissue is gone, pest algae species will grow on top of the skeleton and prevent new coral tissue from recolonizing it. About 20% of the Great Barrier Reef is bleached out, meaning the corals are either already dead, or dying. The algae is gone. And since it’s huge swaths of the reef all bleached out, it’s very hard for the corals to pick up zooxanthellae, because none of their neighbors have any, either.

There are a few reasons for the GBR bleaching. A great deal of it has to do with global climate change. While a two-degree average increase may not sound like much, you have to think about what kind of wild temperature changes it takes to swing the average of the entire planet. Corals are very sensitive to temperature – because of how well water both reflects heat and holds onto heat, the reefs don’t change temperature much. But the increased average temperatures around the globe have created intense high spikes of temperature, raising the water temperature higher than what the corals can deal with. 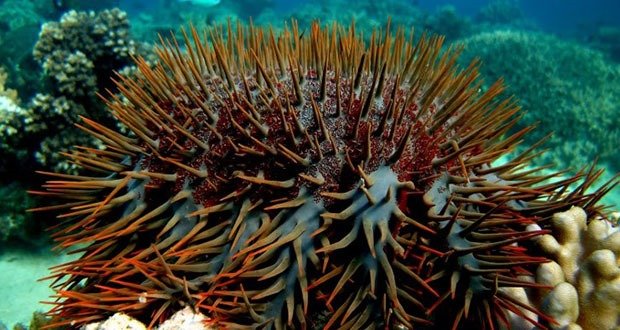 Another significant problem is the crown of thorns starfish. These starfish eat the polyps and tissue of corals, creating scars on the skeletons where tissue is missing. That leads to the pest algae growth, competing with the coral tissue for access to the skeleton. Also, believe it or not, corals can get infections. The damaged tissue can let infections or parasites into the tissue. Corals also occasionally do something called Rapid Tissue Necrosis, or RTN, for no apparent reason, but it usually shows up when the tissue has been damaged in one place. Basically, one part of the coral starts dying, and then within a day or so the entire coral is dead. Normally, the crown of thorns starfish isn’t bad for reefs, because they can slow down the fastest growing corals so the slower ones have a chance to catch up. Like any predator, they protect the prey species by creating room for more of them to grow. But for some reason – probably somewhat related to global warming, scientists think the crown of thorns starfish are reproducing and marauding around the Indo-Pacific reefs as massive colonies that devastate whatever reef they wander into, like underwater locusts. It’s not clear what’s going on, though, especially since this seems to be a cyclical occurrence, happening about every 17 years. So…it might be completely natural and just has very unfortunate timing to happen now while the reefs are already in really poor shape? Or climate change may be causing an abnormal increase in their numbers? Some combination of the two?

In any case, as the reefs die, the life around it dies, too. There are a number of creatures that rely on corals for food or safety. Angelfish and parrotfish both eat corals, and some angelfish are obligate corallivores – their diet must include corals. Clownfish, obviously, rely on anemones for safety. A lot of fish hide among the corals, using the stinging and poison of the corals to ward off bigger predators that can’t get between the corals. As the corals disappear, those fish disappear, too. Then the bigger predators of those fish, like sharks and eels and whatnot start disappearing, too. With no shelter, tangs like blue regal tangs get picked off by the hungry predators. Tangs are a vital part of the health of the reef since they graze on algae that would otherwise grow on the reef, competing with corals for real estate under the sun. The corals can’t grow fast enough to keep up with the algae, so the algae choke it out. That kills more coral, which means less food for the corallivores and less shelter, which means fewer of those fish, and fewer and hungrier predators, which means fewer tangs, which means more algae…

The original (nonclickbait) article was talking about the fact that because of the bleaching, large parts of the GBR are not expected to reproduce like they normally do. Without making a long post even longer, corals coordinate their sexual reproduction and that time is coming up, but with much of the reef very stressed out, those parts probably won’t be able to participate, which will just keep the reef from recovering.

AskUs: Why do we "zone out", or stare into space?