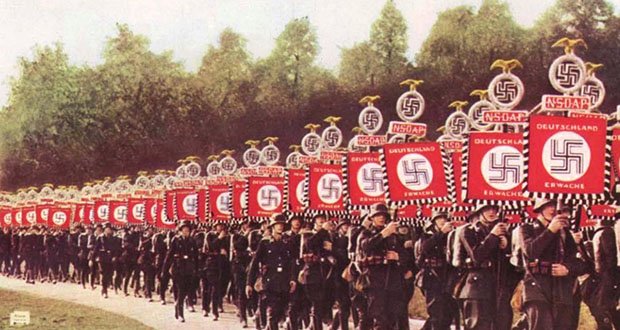 So one of our readers asked us this question the other day: How was Germany able to create such a massive army with vastly superior weaponry in WWII despite being penniless from the results of WWI?

A quick answer is:

How Germany created a massive army?

Germany in the 30s had a conscript army with mandatory service and so having a population of nearly 80 million after annexations of Austria and parts of Czechoslovakia it wasn’t out of the ordinary to come up with such numbers if you assume that the whole country was being mobilized for war. If you look up military strength often you will see two figures – the current standing military and the “military age” which means all people aged 18-49 who can be called upon to serve in times of war. Consider this – look to the right-side table under “manpower”. Can you see the figure for people of “military age”? Don’t get confused comparing professional militaries with militaries of a country mobilized for full-scale conflict or “total war” when the whole country is fighting.

It also helps to remember that both France and the USSR had larger standing armies in peacetime. When Germany invaded France in 1940 they mobilized over four million men, France defended with over five after having mobilized a third of its reserves. The Soviet Union had a standing army of five million brought up to ten million plus reserves when mobilized.

That is a myth. A very persistent one and very hard to dispel even though there are some great lectures and videos on youtube explaining it.

What was vastly superior about German military was their tactical doctrine. It was absolutely revolutionary and you could argue that Germany introduced modern warfare on tactical level to the world. This is an important distinction because while brilliant tactically Germany had terrible strategy, very little operational planning and absolutely dismal logistics – which is why they ultimately lost the war. Germany introduced modern coordinated mechanized maneuver, close air support and a large degree of independence on lower levels of command. They had also a very revolutionary concept for infantry tactics which was centered around machine guns as the main weapon with the squad as support when the allies had machine guns as support of the troops. That proved very effective.

Only some of the weapons they had could be considered superior. Definitely the Bf109 was a top fighter in the early war and the Stukas were excellent dive bombers. But that’s really it. The tanks were not and the main strength was in coordination and proper use as mechanized units or “cavalry” rather than mobile guns for infantry support. Artillery was fairly standard and Germany lacked proper long-range heavy artillery.

A very persistent myth about early WW2 is that Germany defeated Poland, France and the USSR (early on) by superior weaponry but that’s straight form German propaganda. Truth is Germany defeated the countries by better preparation (Poland), luck and advantageous tactics (France) and complete surprise and lack of preparation for war on the part of the Soviets in 1941. When Germany finally went against a prepared opponent – Great Britain in 1940 they failed, and contrary to common knowledge Britain was never “on the brink”. The whole battle of Britain was a showcase of complete failure of German strategic and operational planning.

How they financed it

In short? They printed money to pay for that. Lots and lots of money, to the point where in late 1938 it was becoming slowly evident that a major economic crash was about to happen. I’ve read opinions that had Germany not invaded Czechoslovakia in March and then Poland in September of 1939 they’d be forced to go to war – either as means of acquiring money and resources or as a way to divert attention from a massive downturn. Germany has never been invaded in WW1 and almost none of their infrastructure was destroyed. All their industries and skilled labor was there because the winning powers never considered literally disarming Germany. They only banned them from having certain weapons and working on them. So Germany only needed money which in short term is never the problem if you control all of government. You also have to remember that Germany really went on a shopping spree in 1935 or even 1936. Before they just developed technology and weapons in secret which wasn’t that difficult if you consider that even though Germany was defeated in WW1 they still were the largest industrial economy in Europe.

How they managed to hide it

Through smart choices. First of all the most important thing that contributed to Germany’s success was their choice to respond to Versailles treaty forcing them to have a maximum of 100 thousand troops by maximizing the officer and NCO numbers. They became a “brass-heavy” army which focused on training rather than large army that focused on paying for troops not working in the economy after correctly concluding that if you are fighting with conscripts anyway then good commanders are more important than good soldiers. Germany was banned from having a staff school (a great Prussian invention) but they had it anyway, just under a different name. Because they became an “army in training” they could focus on improving tactics based on their experience in WW1 because having a small army with officers tasked with training and improvement is a good environment for innovation compared to huge armies tasked with maintaining discipline, recruiting soldiers, paying for everyday essentials etc etc.

Germany hid its tank design under various civilian projects like agricultural tractors. Their development of air force was hidden under a growing aerospace industry for civilian use. They also made a pact with the Soviet Union (which wasn’t recognized by international community in the early 20s) to help each other. Germany provided the USSR with technology and the Soviets allowed them to test their ideas in the USSR. This is why for example both Germany and the USSR had developed huge armored and mechanized forces because in both countries the leading proponents – Guderian and Tukhachevsky – could exchange ideas. Also in Germany Guderian’s push for mechanization was not accepted unanimously and even then was implemented poorly. Hitler liked tanks so they built tanks. And then the supplies were being carried with horses throughout the war because Hitler also wanted “guns and butter” which meant that he never mobilized the whole economy like Soviets or Americans did until it was much too late.

Why nobody did anything

That is another common myth resulting from misconceptions, propaganda and general ignorance. First of all Germany didn’t build a huge army in a vacuum. Germany was a huge 90m country which was forced to have a tiny 100k military when France (50m) had 3 to 5 million. Poland (35m) had a million strong army in peacetime. Soviet Union (160m) had five million and counting. When Germany first expanded its army to 1.5 million it was still below what others had so there was a huge jump from “they have an army” to “we are all doomed”. Also the west was absolutely traumatized by WW1 and many people did understand the criticism of the Treaty of Versailles as not fair, especially that president Wilson did promise a fair settlement. So everyone was thinking of Germany as just returning to its normal status, blowing off some steam and then just getting on with everyone. Two famous politicians Stresemann and Briand received a peace prize for working towards French-German reconciliation. Then you have to remember that fascism and socialism were all the rage politically, the cutting edge of social and political doctrines and nobody really thought of Hitler as anything else than Germany’s Mussolini. Mussolini took over in 1922… and nothing happened! When Hitler decided to remilitarize people became worried and late 1936 and early 1937 the plans for expansion and modernization were underway in both Britain, France and Poland. The Munich accords far from being “appeasement” were just a ploy to delay armed conflict because nobody wanted to start it unprepared and nobody – and this is important – nobody wanted to ruin their already fragile economies in the process. Hitler didn’t care and would bankrupt and break Germany… but then two things happened which nobody expected:

First Czechoslovakia gave up without a single shot being fired and then they conquered Poland within two weeks because Poles were completely disorganized and made serious strategic blunders. The initial plan assumed that Poland would defend for three months so that France could mobilize and come to aid. And then the fall of France was a complete shock because it was won by sheer luck!

AskUs: Is there actual pathology behind the common trope of characters (like Hodor) with low IQ only being able to say their name?

AskReaders: What food is not as bad for you as most people believe?