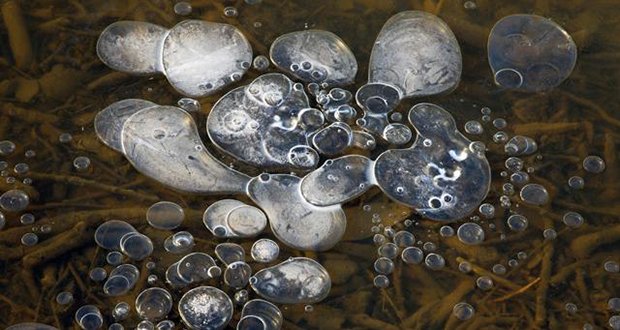 So one of our readers asked us this question the other day: How worried should we be about the Clathrate Gun? Year after year is becoming hotter than the last. Scientists are being ‘caught off-guard’ by record temperatures. Natalia Shakhova says we may have only DECADES before things get really bad. Are things really this dire? Could the human race be gone in less than 100 years?

There is at the present, to my knowledge, no consensus on the immediacy of a “smoking” global & catastrophic clathrate gun. I believe it is worth quoting at length the conclusion of the following recent study (Ruppel, C. D. (2011) Methane Hydrates and Contemporary Climate Change. Nature Education Knowledge 3(10):29):

Catastrophic, widespread dissociation of methane gas hydrates will not be triggered by continued climate warming at contemporary rates (0.2ºC per decade; IPCC 2007) over timescales of a few hundred years. Most of Earth’s gas hydrates occur at low saturations and in sediments at such great depths below the seafloor or onshore permafrost that they will barely be affected by warming over even 103 yr. Even when CH4 is liberated from gas hydrates, oxidative and physical processes may greatly reduce the amount that reaches the atmosphere as CH4. The CO2 produced by oxidation of CH4 released from dissociating gas hydrates will likely have a greater impact on the Earth system (e.g., on ocean chemistry and atmospheric CO2 concentrations; Archer et al. 2009) than will the CH4 that remains after passing through various sinks.

That being said, it appears that there might indeed be a localized increase in clathrate destabilization in some specific settings such as the relatively shallow Arctic continental shelves (Op. cit.), but the rate and actual scale of this phenomenon, as well as what actually happens to the released gasses (does it remain in solution? does it get degraded by microbes?), remains to be determined.

The safe answer to the question is that you probably shouldn’t be worried about the clathrate gun hypothesis. There is evidence of releases in the geological record coinciding with sharp increases in temperature but the causal relationship between the two is debated. However, probably most importantly, as we learn more about methane hydrates the probability of it being a major issue gets less and less over time. The conditions in which they form and exist have become more constrained. The concentrations of them in oceanic sediments has drastically declined. The mechanisms of how they contribute to climate change has been with increase clarity revealed to be less rapid than what we initially thought. The current understanding is drastically more informed and less catastrophic than when hypotheses of apocalyptic temperature increases as a result of a clathrate gun were formulated.

Some good additional reads about the question:

Global estimates of hydrate-bound gas in marine sediments: how much is really out there? which includes an overview of all past estimates, their methodologies, etc.
Have Sudden Large Releases of Methane from Geological Reservoirs Occurred since the Last Glacial Maximum, and Could Such Releases Occur Again? which is another good review of the subject.