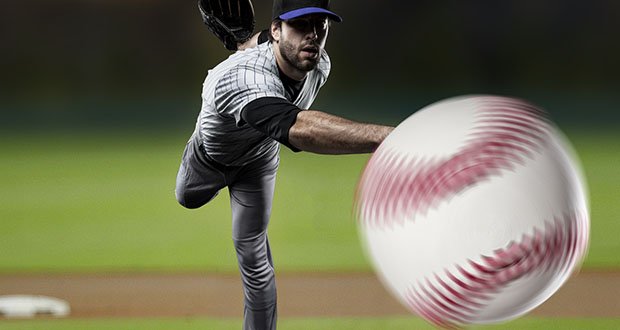 So one of our readers asked us this question the other day: I found this gif in which a pitcher is throwing what is known to be a “Knuckleball” and it has a lot of breakdown to it. I love baseball and would like to know when a pitcher throws a baseball, how does it curve?

A baseball can curve for a number of reasons.

For a knuckleball, the ball moves around as it approaches the catcher because it isn’t spinning. Spinning helps stabilize the ball, and prevents small turbulent effects from affecting its flightpath. A non-spinning ball isn’t perfectly spherical, so as the air comes off the face of the ball, it creates turbulence in the air, and causes the ball to move erratically. You can see an example of vortex shedding here in the gif below.

The more wind, the more the knuckleball moves when in flight, towards the catcher. The more turbulence, the better for the pitcher. It is called the Magnus effect.

It’s also worth considering the humidity and air temperature, which have a pretty serious effect on air density. The higher either of those are, the higher the air density will be, and the larger the effect will be on the ball in flight. So there will be a big difference in ball movement between someone pitching in cold, dry weather than that same person pitching in hot, humid weather.

The knuckle ball is unique as the only pitch that doesn’t have deliberate spin. Fastballs, curves, sliders, etc all are given spin as the ball is released from the pitcher’s fingertips. Any ball moving rapidly through the air creates a wake of turbulence behind it. It also carries a thin layer of air along with it.

For something like a curve ball, the spin of the ball is what causes it to move in a certain direction. As the ball spins, one side goes in the same direction as the air passing the ball, and the other side goes in the opposite direction of the air passing the ball. The side that moves in the same direction accelerates the air slightly (imagine the surface being rough, and acting to push the air as it goes by). The side going in the opposite direction slows the air slightly. As air accelerates, the pressure drops, and as it slows, the pressure rises (this is how planes fly). The net result is that the ball gets pushed by this pressure difference. With a top spin, you’ll see the ball dropping, and with a backspin, you’ll see the ball rising (or at least not dropping as quickly). If you apply this to a side spin, it’ll cause the ball to curve from left-to-right or right-to-left.

It’s worth noting that fluid dynamics is super complicated, but that’s a pretty simplified explanation.

AskUs: Why isn’t it possible to simply add protons, electrons, and neutrons together to make whatever element we want?

AskUs: Why do we see black spots after looking into a bright light?