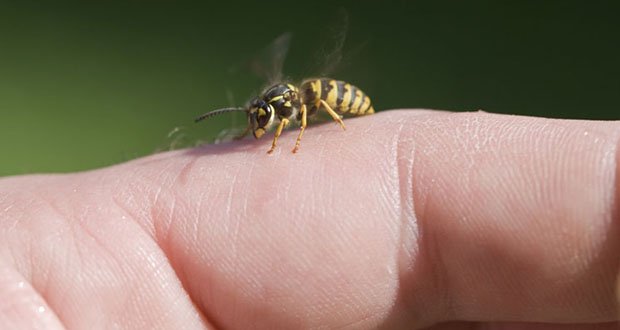 First of all, while many insects might bite and/or sting, only one species of bee – the honey bee (apis mellifera) – is the one we normally think of. It has a much larger barbed sting than other bees or wasps and is the kind of species which dies after stinging you. (I want to point out that bees don’t always die when they sting; this only occurs when the bee stings a creature with thick skin, such as most mammals, where the barbs get stuck in the skin.)

When the honey bee stings you, it releases an apitoxin (literally a “bee poison”) which contains histamines (as well as other toxins) which can cause and accelerate inflammatory responses such as swelling; in highly allergic people, the sting can also lead to anaphylactic shock, which is just our immune system going way out of control.

Other insect bite/stings (such as wasps, certain ants, and kissing bugs) can also trigger the immune system to react wildly. It is interesting, however, that people are usually not highly allergic to all of these – someone who is allergic to bee stings might not be allergic to wasp stings or vice versa, which proves that the venom isn’t the same across all species.

AskUs: Why is 70-75% alcohol a better antiseptic than that of a higher concentration?

25 Kickass and Interesting Origin Stories of Some English Words