So one of our readers asked us this question the other day: Is a Yellowstone eruption in the next decade imminent?

First, we have to define what is meant by “Yellowstone eruption.” I presume you refer to the very large scale eruptions of the caldera which have received so much press lately. The whole area is prone to much more localized volcanic events, but lets leave those aside. 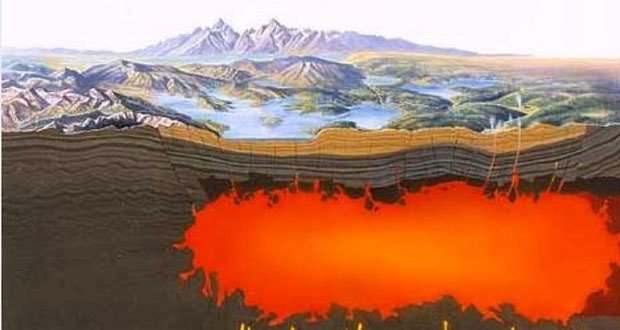 I’ll refer you to the 2007 USGE open file on Yellowstone volcanic hazards, which has this to say (my highlights):

“Of all the possible eruptive hazards that might occur in the region of Yellowstone National Park, by far the least likely is that of another major caldera-forming pyroclastic eruption of 100 km3 or greater. Three such events have occurred in about the past 2 million years, each associated with a cycle of precaldera and postcaldera rhyolitic volcanism lasting on the order of a million years. In the Island Park area, west of the 639±2-ka Yellowstone caldera, the older rhyolitic source areas have subsequently produced basaltic lava eruptions. In contrast, contemporaneous basaltic magmas surround the Yellowstone caldera, but none have erupted within the caldera. This pattern strongly suggests that the crust where rhyolitic magma chambers existed during the previous two major caldera-forming eruptions and their associated rhyolitic volcanism has cooled and solidified sufficiently to fracture and allow basaltic magmas to intrude from below, precluding the possibility of large volumes of eruptible rhyolitic magma remaining there. However, the great heat flow represented by the massive long-lived hydrothermal circulation system of Yellowstone (Fournier, 1989) as well as significant delays in seismic-wave travel times and wave attenuation imaged in the shallow crust beneath the Yellowstone caldera (Benz and Smith, 1984; Miller and Smith, 1999; Husen and others, 2004) strongly suggest the continued presence of magma. What remain most uncertain are (1) the percentage of melt in the remaining, partly crystallized magma, (2) its degree of interconnection, and (3) its potential eruptibility. The more than 600 km3 of highly differentiated magma that has erupted as lava flows within the caldera between ~170 and 72 ka represents a volume equivalent to a large caldera-forming eruption. Those eruptions perhaps partly degassed and depleted the magma sufficiently slowly without triggering voluminous pyroclastic eruptions that they may have rendered another major caldera-forming eruption from the present subcaldera chamber unlikely.”

So what must we make of this:

We refer to rhyolitic vs basaltic magmas; the rhyolitic ones are the ones we keep a close eye on because they usually contain more gas, and that gas is what gives eruptions their explosive character. Basaltic magmas tend in general to have less gas and make for calmer eruptions.

As to saying we are “overdue for such an eruption in the next few years”, there are no signs to that effect, so: Nah… Kickback in a comfy chair with a cold beer, enjoy the sunset, or perhaps Old Faithfull.

AskUs: Is there a difference between consuming 1500 calories in a day vs. consuming 2000 and burning 500?