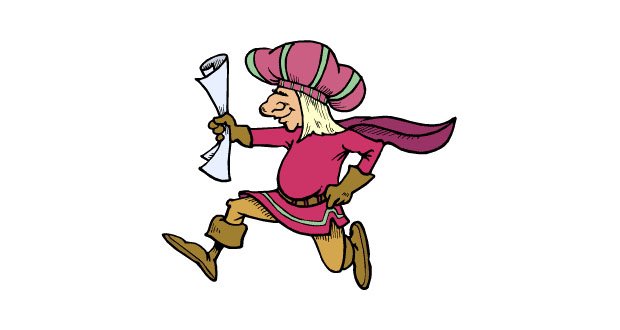 So one of our readers asked us this question the other day: We often hear of “killing the messenger,” but how dangerous was it, really, to be a messenger bearing bad news or unwelcome demands in Classical or Medieval Europe/Near East/North Africa?

Was there an unwritten (or written, for that matter) code protecting messengers? Was killing them frowned upon to the point that even absolute rulers or warlords would face some opprobrium? Or was this a job that nobody wanted because it was totally unsafe?

On that last point, a follow-up: who became messengers, and why? Obviously, there were high-level delegates and envoys, but I’m thinking more of the “little guy,” — some poor schmuck who has to tell Attila that he’d better get out of Roman territory, for example.

That’s an interesting and really broad question, so I’ll just deal with the Roman period. There were numerous factors protecting the bearers of bad news in this period.

Messengers within Republican Rome itself to the Senate, for instance, could be anybody: they could be civilians carrying news from somewhere else. They may not have been citizens or even Latins so they did not necessarily have legal protection. For a start, the Romans, like everybody else were basically not in the habit of hurting or killing people who brought them news for the very practical reason that ‘shooting the messenger’ might mean you got no more (accurate) messages. Plutarch castigates Tigranes of Armenia for such a foolish act:

“Since the first messenger who told Tigranes that Lucullus was coming had his head cut off for his pains, no one else would tell him anything, and so he sat in ignorance while the fires of war were already blazing around him, giving ear only to those who flattered him and said that Lucullus would be a great general if he ventured to withstand Tigranes at Ephesus, and did not fly incontinently from Asia at the mere sight of so many myriads of men.” (Plut. Luc. 25.1)

In the Imperial period, messengers within the Empire were usually soldiers, but they worked giving messages to Imperial authorities. As citizens they were both more and less vulnerable to being ‘shot’ as the messenger: they were subject to disciplina militaris, which denied many of the rights to safety and appeal of the civilian citizen, but on the other hand their being soldiers meant they could generally only be executed for a military reason, lest an official or officer upset the local soldiers, which could be very fatal for them. Mutiny was perhaps the Imperial soldier’s most important protection from unreasonable violence from superiors. So ‘shooting the messenger’ was not a great option for soldiers either. I would not be surprised to find examples of certain Roman Emperors who are unpopular in the literature committing such an act (I can’t think of any at the moment), but these would be looked upon with scorn by the writer and used as an example of that particular Emperor’s bad character.

For the Romans, the reputation of their nation and the high status of their messengers might also protect them from harm. The story of Gaius Popilius Laenas single-handedly facing down Antiochus IV and his army in Egypt to prevent them from attacking the Ptolemies, a Roman ally, is instructive:

“At the time when Antiochus approached Ptolemy and meant to occupy Pelusium, Caius Popilius Laenas, the Roman commander, on Antiochus greeting him from a distance and then holding out his hand, handed to the king, as he had it by him, the copy of the senatus-consultum, and told him to read it first, not thinking it proper, as it seems to me, to make the conventional sign of friendship before he knew if the intentions of him who was greeting him were friendly or hostile. But when the king, after reading it, said he would like to communicate with his friends about this intelligence, Popilius acted in a manner which was thought to be offensive and exceedingly arrogant. He was carrying a stick cut from a vine, and with this, he drew a circle round Antiochus and told him he must remain inside this circle until he gave his decision about the contents of the letter. The king was astonished at this authoritative proceeding, but, after a few moments’ hesitation, said he would do all that the Romans demanded. Upon this Popilius and his suite, all grasped him by the hand and greeted him warmly. The letter ordered him to put an end at once to the war with Ptolemy. So, as a fixed number of days were allowed to him, he led his army back to Syria, deeply hurt and complaining indeed, but yielding to circumstances for the present.” (Pol. 29.27)

Even so, note the suggestion that Laenas acted arrogantly. Even in the ancient world, where harsh and threatening “compellence diplomacy” was the norm, this was pretty wild conduct (Eckstein, 2006, 173). Even between intense enemies, diplomats (usually Senators) seem to have been able to expect safety. See Hannibal in Spain blowing off the diplomatic party from Rome at the outbreak of the Second Punic War while in the process of attacking a Roman ally:

“In the mean time, an account was received, that ambassadors had arrived from Rome; on which Hannibal sent messengers to the sea-shore, to meet them, and to acquaint them, that it would not be safe for them to come to him, through the armed bands of so many savage nations; and, besides, that, in the present critical state of affairs, he had not leisure to listen to embassies. He saw clearly, that on being refused audience, they would proceed immediately to Carthage: he, therefore, dispatched messengers and letters beforehand, to the leaders of the Barcine faction, charging them to prepare their friends to act with spirit, so that the other party should not be able to carry any point in favor of the Romans. Thus the embassy there proved equally vain and fruitless, excepting that the ambassadors were received and admitted to audience.” (Livy 21.10).

Even while deliberately provoking Rome to war and fighting a siege, there is no suggestion that the diplomats sent to Hannibal would be threatened. On the subject of the Carthaginians however, they had a practice of crucifying unsuccessful generals, and the story goes that they tortured to death a captured Roman consul (Marcus Atilius Regulus) who broke an oath he had sworn to his captors. Even so, Rome still felt that it could send diplomats to their most aggressive general and expect safety. I would suggest that this meant it was the norm, no doubt through cultural values and norms rather than any rules or laws, there being no international legal system to enforce such a system even if it did exist.

At least in the early Republican period, there were more formalized forms of diplomacy such as the fetials, where a fetial priest would make his way to another Italian city, abuse the first enemy citizen he saw, and then make a song and dance in the enemy forum and demand reparations, which may or may not be actually achievable requests, and war would be declared in the aftermath if the demands weren’t met. This was in order to establish divine approval for a war (Dawson, 1996, 124-5). Nowhere have I seen it suggested that the fetials would have been exposed to any danger. This is from an archaic period and I would not extrapolate this to later Rome or the Empire or Medieval Europe or anywhere else, but it is an example of how cultural norms (and religious deference) can render such ‘messengers’ quite safe even when carrying pretty unpleasant and aggressive tidings.

Using the logic I have already developed, as for messengers to somebody like Attila, I don’t have the evidence to definitely answer that but I would suggest that only high ranking persons would be sent if any were sent at all. I am extrapolating this from Republican practice, however. That said, if the Romans did not consider Attila to be a legitimate king, as he was a nomad, there was no reason the normal rules of war had to apply. It is my understanding that Roman jus ad bellum referred mainly to war between states, whereas war between Romans and any sort of rebels or traitors or some barbarian enemies, as Attila might be defined as, required no declaration of war, hence no delegation would need to be sent to Attila for the Romans to consider it a just war. Any messengers sent to Attila would have been in a diplomatic sense, and Attila for practical reasons could not harm such men: unless he wanted to just fight forever and never extract any official recognition or payment from the Empire, he would have had to accept diplomats and talk to them. If he hurt them they’d stop coming. Further, the purpose of war generally being to extract a formal surrender for the enemy along with concessions, diplomats and messengers of various shades were absolutely essential to achieve this. This had been the pattern of Hunnic warfare in the Eastern Empire in the early-to-mid 400s: invasion, extracting concessions, then leaving. Attila may have had grander plans, as evidenced by his attempt to marry Honoria, the sister of the Emperor. However this would make formal discourse and recognition more important to him, not less. Perhaps a true marauder with no imperial ambitions might be more violent towards foreign messengers (perhaps somebody like Tamerlane might be an instructive example?)*, but this was not a practical way of doing things.

As such, at least in the Roman period, I think messengers both within European states and to other powers were generally kept safe by a mixture of cultural and intercultural norms and practical considerations regarding the need for information and communication between warring powers. Exceptions to these norms perhaps only proved the rule and would have been examples of outrageous (and probably impious) conduct in any case where it occurs in the literature, setting the perpetrator up for a fall later on. If anything, ‘don’t shoot the messenger’ seems as if it would have been fairly practical advice in the Roman period.

*And look at where murdering a few Mongol traders got the Kwarazemian dynasty! The Mongols were no doubt another example (along with the Mid Republic-Mid Imperial Romans) of a race/army/state so feared that their representatives were often sacrosanct.

AskUs: Why does armpits sweat smell significantly worse than sweat from other body parts?

AskUs: How did the cosmonauts aboard Mir react to the break up of the Soviet Union?