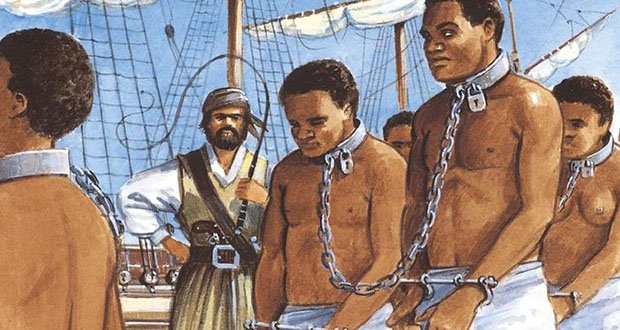 So one of our readers asked us this question the other day: I always notice slave ship drawings show slaves shackled and on their backs. So when slave ships transported African slaves to the Americas, how did the slaves eat and eliminate waste? Did they lay that way for the entire journey? How many didn’t make it?

On most slave vessels, standard practice would be to bring out small groups of enslaved individuals at a time – during good weather – onto the ship’s deck to eat, be cleaned and have some limited exercise (the most famous form of exercise being making slaves dance and sing on the spot, though this was certainly not a universal practice).

Food provided was of little real nutritional value, either for adults or growing children. Typical concoctions would involve mashed beans or rice acquired on the West African coast, made into a seasoned pulp that might, if you were ‘lucky’, have a little meat in it. Most slave ships would carry enough food to ensure a minimum level of rationing in the event of spoilage. Water would be distributed in strictly rationed quantities two to three times a day, usually alongside food and in a quantity of about half a pint. If weather did not permit the bringing of captives on deck in groups for feeding, food would instead be distributed in confinement in communal tubs. If an individual African was not willing to eat, or desired to commit suicide by starvation, they could be ‘safely’ (from the perspective of the crew) force-fed using a scissor-like medical instrument that was designed to hold open the Human jaw. Given the conditions of malnutrition and dehydration however, most enslaved persons would have welcomed the little food and water they were provided with, particularly after several days on board.

Large buckets of wood or metal were provided for slaves to relieve themselves in – given that they were kept manacled in some fashion at all times though, this was often not particularly practical, and it would have been all too common for slaves to be forced to relieve themselves within their holding areas. Some effort was certainly made to clean both individuals and confinement areas on most slave ships, but this was not always possible or practical, especially on ships that had a shortage of crew (often caused by the death of sailors during the voyage, who themselves were also battling malnutrition and disease even if their conditions were not as wretched). Feeding, cleaning and exercise time also in theory provided opportunity to identify Africans who were succumbing to illness and remove them to other parts of the ship on vessels with spare space; in practice though, this was an ineffective strategy even when it was employed, given that any illness that manifested itself was likely the result of appalling conditions. Problems were compounded by the fact some Africans would have been vomiting bile and blood from sickness (of sea or disease), or have open sores and other wounds that could leak.

In terms of mortality, it is impossible for us to know precisely how many individuals lost their lives in the course of the transatlantic slave trade. The best estimate we have – based on a comprehensive survey of surviving records of slave vessels for all major European powers – puts the total number of African men, women and children who died making the journey on slave ships to the New World at a little over 1.82 million between 1501 and 1866, though the true figure could certainly be higher. Generally speaking, the pattern is one of declining mortality across the period of the slave trade as European governments sought to respond to abolitionist critique of conditions and slave traders themselves sought new ways to maximize the survivability rates of their Human cargo. In the case of slave traffic by vessels flying British or American flags, the mortality rates were approximately as follows by half century:

Note that both Britain and the United States abolish the slave trade after 1807 – though it does continue in an illicit form for some years afterwards, it was probably not a substantial enterprise. You can see then that the general trend was one of declining mortality through the period, but the British/American slave trade alone killed nearly 600,000 people, in addition to the 2.9 million it successfully delivered into slavery in the New World. The Atlantic ocean became a literal burial ground for the bodies of millions of African men, women, boys and girls whose lives were claimed by any combination of malnutrition, disease and violence. The brutal experience of the middle passage was not something that was accidental: although slave vessels had a vested interest in delivering as many people as possible to the New World, the entire process of being degraded in this extreme and heinous fashion was part of the system by which slavers could hope to break the spirit and sense of Human dignity in their victims. It was a system that was inherently violent and recognized as such, intended purposefully to demonstrate to Africans how little they were worth as people in the eyes of their captors, and enforce from the very beginning their place in the racially stratified social order of the New World.

It is also worth pointing out that the image of the slave trade popularized in most famous depictions is perhaps a little inaccurate. At least on British slave vessels, standard practice was only that adult men would be kept chained below decks; space permitting, adult women and girls would be kept in a separate holding area without the same physical restraints (though still in horrendous conditions), whilst young boys would either be kept separate again or also with the women. It was often young male children who had the most liberal experience of captivity during a slave voyage, being permitted a limited amount of roaming freedom on some slave vessels. This was by no means a uniform experience – there was no standardized slave ship design, only common patterns, but it was typical only for adult men to endure the most horrendous physical restrictions on their movement and liberty, as they were perceived to be the most dangerous. The marginally increased autonomy given to women and children, however, was compromised by the fact that they were at constant risk of sexual exploitation and gratuitous violence from members of the crew.

And perhaps most importantly, it should be emphasized that Africans did not simply accept their fate and wait for whatever would come. We know that on many vessels Africans sought to find ways to resist their captors, from small displays of autonomy – like using the relative freedom of children to ferry messages of support to and from the segregated groups – to full out acts of violent insurrection. We know of literally hundreds of acts of violent resistance on the part of African people to European slavers, including dozens of major violent uprisings on slave vessels. Although we are accustomed to think of the shackles and chains of the slave trade as icons of destructive domination and exploitation, it is important to remember that they also demonstrate the white European fear and terror in the face of African agency and resistance. That such extreme and violent measures of control were widely recognized as necessary, and the threat of revolt taken so seriously, is testament to the fact that no matter how hard they tried to destroy African identity and dehumanize African people, European exploiters were still on some level aware of the determined and resistant spirit that their captives had, and they were very much afraid of it. It is very likely that there were many, many more smaller acts of resistance and defiance that have gone unrecorded or undiscovered in the historical record. It is important to remember that whilst African victims of the slave trade suffered the most incredible degradation and abuse, they remained real people with real agency, and they sought to exercise that agency.

There are two books I would recommend for the account they give of the slave trade in an engaging and accessible fashion. The first is Audra Diptee’s From Africa to Jamaica: The Making of an Atlantic Slave Society, 1775 – 1807, which makes the compelling argument about no matter how hard slave traders tried to diminish and degrade the Humanity of African people, they could not ignore it in their Human cargo. The other is a case study by James Walvin, titled The Zong: A Massacre, The Law and the End of Slavery, which is a focused analysis of the infamous Zong massacre in which hundreds of Africans were murdered in cold blood for an insurance claim. It takes this singular journey to make powerful insights about the wider slave trade, and offers a fascinating account of one of the slave trade’s most notorious individual journeys of passage. Both are recent books benefiting from some of the cutting edge developments in the historiography of the transatlantic slave trade, and both should have been in print for long enough to be relatively easy to find.

AskUs: What is the biggest distinguishable difference between Alzheimer's and dementia?

AskUs: Did war racketeering really create thousands of millionaires and billionaires during WW1?