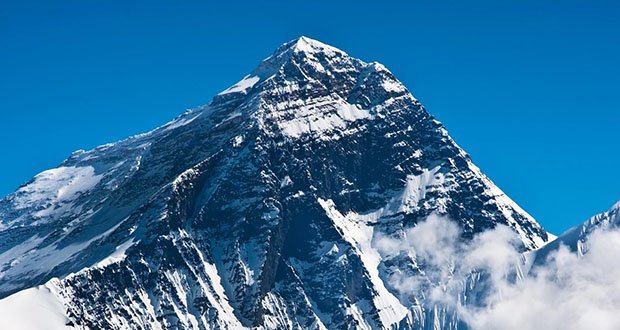 So one of our readers asked us this question the other day: What is the highest a mountain can be? Is there a limit to it?

Short answer: In general, the maximum size of a mountain on a planet will be limited by surface gravity. The greater the surface gravity, the smaller the biggest mountain can be. On earth, it works out that Everest is probably pretty close to this limit.

That pressure could be written

where P is the pressure on the base, rho is the density of the rock, g is the surface gravity of the planet, and h is the height of the mountain. If P is the breaking strength of the rock, you’ll find a cool relation:

Since P/rho is just a constant, this relation tells us that as the surface gravity of the planet in question increases, the maximum size of a mountain it can support decreases.

This also tells us h g must also be equal to a constant, which lets us relate the maximum height of mountains on planets of similar compositions but with different masses:

Which is actually really close to the true value! This is even cooler because it argues that both Earth and Mars have mountains near the maximum possible height for the planet. Of course, a geologist may not like any of what I just said above. Mountains and tectonic plates and mantles are complicated beasts – this was just a first order approximation.

But, as one last fun fact, you can do something else with this approximation. We can predict the ‘potato radius’ – the maximum size a ‘potato shaped’ asteroid can be before its gravity becomes strong enough to pull it into a sphere.This is done by modeling the potato asteroid as a sphere with a huge mountain on it that must shrink as the asteroid grows in mass, until the mountain is smaller than the radius of the asteroid.

AskUs: Did any ancient cultures find dinosaur fossils? What was their reaction?

October 20, 2016
Latest Posts
Subscribe to Blog via Email
Did you know?
Loading...
Facts of the Day
Registration is disabled.