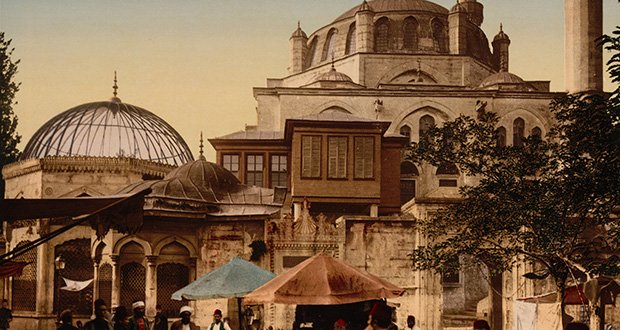 So one of our readers asked us this question the other day: What lead to the Ottoman Empire decriminalizing homosexuality in 1858? Was there a lot of opposition and controversy around this? And how did they justify it in an Islamically-based law system?

What an excellent question! The answer is both complicated, and simple. The first thing to remember, is that Tanzimat laws weren’t always intended to create new social norms or social patterns. Often, they were just officially codifying things that had been in practice for awhile, as part of a modernizing effort to essentially “have all laws on the books.” That’s the simple answer! This law was more along the lines of codifying homosexual behavior that was pretty common at the elite level of Muslim societies at the time.

So this law in particular was enshrining what was a common elite practice in many Muslim societies. It seems crazy, given the Islamic world’s reputation vis a vis homosexuality today, but the Islamic world has a long, long history with what you might call homonormativity. Using that term particularly is fraught, because historians working with gender argue that today’s strict homosexual/heterosexual dichotomy, where you are either “gay” or “straight,” with no middle ground, is a construct emanating from mid 19th century Europe, and so using any of today’s terms before that is dicey.

I digress. In classical Islamic Persianate culture, beauty was ungendered. The sort of words one might use to describe beauty could be equally applied to women or young, beardless men. I’m using the term Persianate to refer to Islamic societies that were heavily influenced by Persian language, society, and culture. Because of heavy Persian influence from the Abbasid Caliphate forward, the major early modern Islamic empires (Ottoman, Safavid/Qajar, Mughals) shared a relatively common culture, similar to the Latinate culture that united early modern Western Europe.

In Persianate cultures, all of them Muslim, it was very common for older men to romantically pursue younger, beardless men. Once a teenager started to show traces of growing his beard (his “khatt,” or line), he generally moved to the “older man” category, stopped being pursued, and frequently became a pursuer. There is a HUGE AMOUNT of poetry about this, usually tied deeply to Sufi philosophy- finding true beauty in the inpermanence of this world, sadness at what age and time does to us, and how different Allah and his love is compared to our transient existence. Remember, from the time a man hits puberty until his khatt starts to show is extremely limited. The Persian word for one of these young men was “amrad,” which sort of occupied a third gender space. In elite Persianate society, once you were fulfilling your reproductive duties in a heterosexual marriage, it seems that people didn’t much care about what you did with your own private sexual life. You could get a bunch of female concubines and wives, and society was fine with that. You could spend your time chasing after amrads, and people were fine with that, too. There is a great list in Najmabadi’s fantastic book on this subject of how official Safavid chroniclers list the sexual proclivities of various Shahs, totally without judgment. While elite practice is pretty clear, what was going on in lower rungs of society is a little more opaque. There is pretty decent evidence that lusting after amrads was passably acceptable in common society, as well.

And lest you think this is a cultural artifact of pre-Islamic Persian or Greek culture (remember, the Muslims were reading Plato just like we are- if this description of older man/younger man coupling sounds familiar to you from the Symposium, that’s not a coincidence!), and the fact that Sufis were normalizing homosexual love as part of a symbolic understanding of the sad impermanence of this world versus the perfect timelessness of Allah, they were also finding Quranic support for this. You are probably familiar with the Islamic description of paradise- every time there is a new terrorist attack, some guy is usually quick to make a joke about those 72 virgins. Well, in the Quran, the proper word for those virgins is “hur,” an eternally young female beauty. Those hur, have a counterpart, “ghilman,” who are eternally young MALE beauties. The sexual role of the ghilman is not explicit in the Quran, but the parallel descriptions and services listed for hur and ghilman certainly got later Muslim commentators going. Aligning their cultural practice with quotes from the Quran, plenty of Persianate Muslims were pretty sure there were serving girls AND amrads awaiting them in paradise.

This is already getting quite long. Ottoman society, as one heavily influenced by Persianate culture, had a lot of the same cultural practices going on, and Ottoman poetry is rife with references to young, beloved, men. What changed to get us to today’s world? That answer, you will not be surprised to learn, is complicated. There is a fair deal of argument about it, but the rough academic consensus is: Europeans. Muslims in the 19th century were made to feel VERY aware and self-conscious of anything they did that Europeans deemed “backwards.” Homosexuality in elite Muslim circles was most definitely something Europeans considered backwards. As Europeans penetrated the Muslim world, ever deeper, either economically (in the Ottoman Empire) or in full on colonialism (India, Egypt), they constantly commented on and tried to suppress these practices. Muslim elites, trying so hard to modernize their empires and societies to avoid being colonized, tended to adopt European mores along with technology and institutions. In this climate, the Ottoman decriminalization of homosexuality can be read as an act of resistance to European hegemony. The Ottomans were trying to preserve an old cultural practice while modernizing elsewhere. The practice was inexorably extinguished, however, as more and more European cultural practices and attitudes were adopted. As the practice was slowly extinguished in former Ottoman lands, modern Islamic fundamentalism came along with its radical reinterpretation of Islam and things like homosexuality, and replaced a lot of what I’ve been talking about here. And then, about a hundred years after browbeating the Ottomans and Persians into subduing homosexual practices, Europeans decided homosexuality was fine, sometime after the mid 1990s. And in a cruel historical irony, they browbeat Muslims for being anti-homosexual, after their great grandparents spent a century extinguishing a vibrantly homonormative society.

Najmabadi’s “Women with mustaches and men without beards” is the best, modern book on the subject. You will find an extensive bibliography in it if you are curious!

AskUs: Are photons emitted by fire the same as those emitted by a bulb or an LED?

July 7, 2016
Latest Posts
Subscribe to Blog via Email
Did you know?
Loading...
Facts of the Day
Registration is disabled.