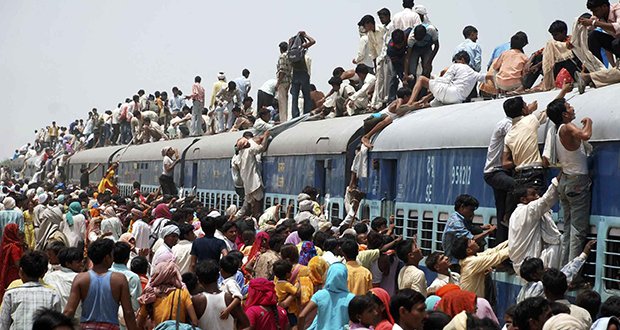 So one of our readers asked us this question the other day: What made China and India the most populated countries in the world?

Here’s why I think India (and perhaps the same reasons are partly applicable to China too) has always had high populations:

So the reason why India had such a large population was because they have the largest area of arable land, and the fact that the climate allows 2 or more growing seasons every year. China is not far behind, and it seems likely that they also supported large populations for the same reason. The anomaly here is not India or China, but rather the US. Why did the US not produce similarly large populations despite also having large amounts of arable land? They didn’t have rice or wheat, but they did have corn, which has a higher yield than both rice and wheat. In fact, corn has the highest yield of any cereal crop.

I suppose it may have to do with being part of the new world, and many old world improvements in agricultural technologies not reaching them until late. The absence of large domesticated animals to pull plows and break earth, the fact that many tribes weren’t agricultural tribes, to begin with, but were hunter/gatherers instead probably also factored in.

For China, it is also worthy to mention Qing dynasty and Spanish invaders of America. Until 1644, the year of Ming dynasty’s collapse and Qing’s invasion of Manchuria, China had never had more than 100 million people. Why? The food. China had long lived on wheat and rice, which provided low yield per acre before the coming of modern fertilizer, machines, and seeds. But things were changing slightly. With Spanish’s invasion of America, corn, potato, and sweet potato spread around the world. Chinese first knew these foods at late Ming dynasty via Spanish colony-Philippines. Gradually they were introduced to China, first in Guangdong and Fujian province. After Qing dynasty’s establishment, these foods were increasingly planted in China, especially in mountainous areas or lands which were not suitable for wheat and rice. Thanks to these foods, China had a population more than 400 million in late Qing dynasty(1840-1911). This population guaranteed China to survive the European colonialism and Japanese imperialism.

AskUs: After the big bang, why didn't the universe re-collapse under its own self-gravity?

AskUs: Why is Africa not as developed as the other continents besides Antarctica?