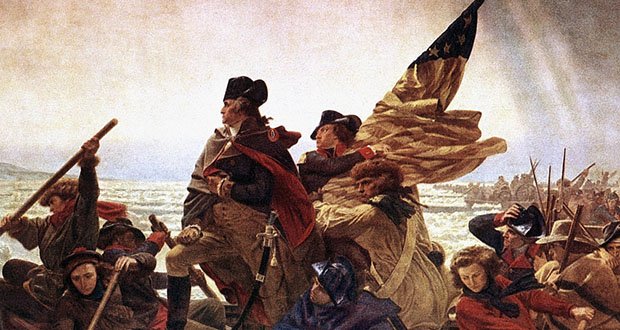 So one of our readers asked us this question the other day: What term did the British use to refer to the American Revolution as it was happening?

When King George III addressed Parliament on October 27, 1775, he referred to “The present situation of America” as “their [American’s] revolt, hostility and rebellion.” He spoke of “a desperate conspiracy” rather than a revolution and refers to it as “The rebellious war.”

King George and Parliament saw the War for Independence as a kind of change in leadership rather than a political revolution. He calls the American leadership a “usurpation” rather than a revolution. He wasn’t addressing a political revolution whereby a new breed of democracy was put into place, but rather a small group of elites hijacking the institutions that Britain had already put into place.

You can also take a look at proclamations made by King George, bills passed through the British parliament or the British Press during the American Revolution. You will see that “rebellion” was the most common used word.

“Proclamation, by the King, for Suppressing Rebellion and Sedition” on August, 23rd 1775, contains six times the word rebellion:

“…after various disorderly acts committed in disturbance of the public peace, to the obstruction of lawful commerce, and to the oppression of our loyal subjects carrying on the same; have at length proceeded to open and avowed rebellion, by arraying themselves in a hostile manner, to withstand the execution of the law, and traitorously preparing, ordering and levying war against us…”

Journals of the House of Commons, Volume 37 – A Bill To prohibit all Trade and Intercourse with the Colonies (presented by Lord North, 27 November 1775):

“Whereas many persons in the Colonies of New-Hampshire, Massachusetts-Bay, Rhode-Island, Connecticut, New-York, New-Jersey, Pennsylvania, the three lower Counties on Delaware, Maryland, Virginia, North-Carolina, South-Carolina, and Georgia, have set themselves in open rebellion and defiance to the just and legal authority of the King and Parliament of Great Britain…”

The British press offers more insight which terms were used during the American Revolution. The Gentleman’s Magazine, Volume 45 – Summary of Proceedings in the present Parliament:

“By declaring them in rebellion, they must have recourse to arms: all negotiation is cut off. I think the word rebellion impolitic and unjustifiable. I beg to know what paper on your table can vindicate that term? The first law-officer of the crown said, “A number of men committing treason was rebellion.” I differ from him in the definition: according to my conception of the phrase, they must be in military array, to effect some military purpose. One hundred men coining money are not in rebellion, though committing treason. Insurrections to pull down inclosures is not rebellion, though deemed a constructive levying war.”

“Leave was given by the Commons, Oct. 27. to bring in a bill, to enable his Majesty to call out and assemble the militia, in all cases of rebellion in G. Britain, or any of the dominions thereunto belonging.”

The American Revolution and the British press, 1775-1783, by Scott Lutnick

British Supporters of the American Revolution, 1775-1783, by Sheldon S. Cohen

3 Interesting Maps of the Week - Part 4

AskUs: Are there any folk tales or legends that might be cultural memories of the last glacial period?